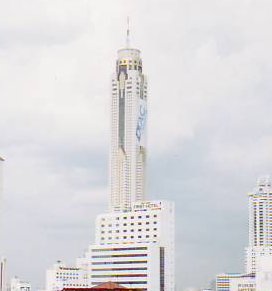 The Baiyoke Tower (Baiyoke 2) in Bangkok is a great place to go for panoramic views of the Thai capital. Thailand’s tallest building* is 85 storeys high and stands at an impressive 304 metres tall (328m including the communications antenna). Construction on the skyscraper began in 1990 and was completed in 1997. The building is home to the Baiyoke Sky Hotel which opened for business in January 1998. The lower floors at the Baiyoke are used for retail space which means that the 673 guest rooms start on level 22 and go all the way up to level 74. However, you don’t have to stay at the Baiyoke Sky Hotel to take advantage of the views.

*MahaNakhon Building, Bangkok
The MahaNakhon building was officially opened in August 2016. Standing at 316 metres high, MahaNakhon is now the tallest building in Thailand. 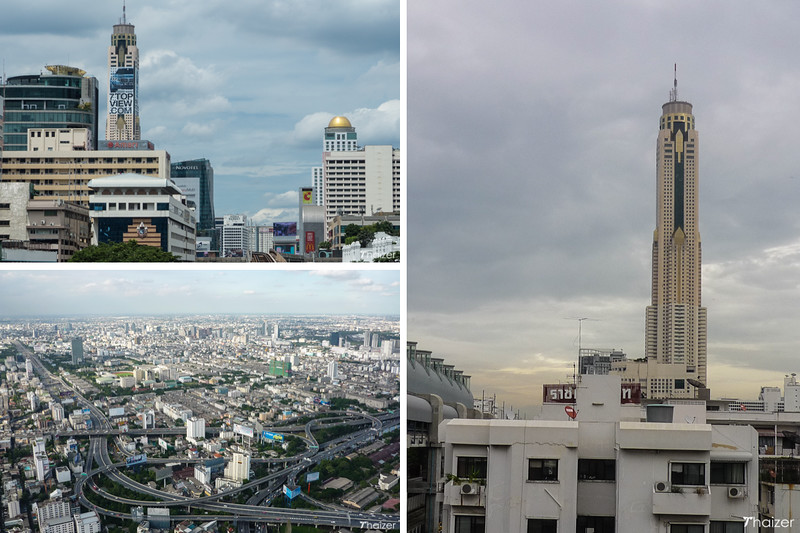 The Baiyoke Tower has an observation deck on level 77 that is open to the public. Last time I went was a few years back when the entrance fee was 200 Baht, but that may have increased since. I’m not particularly good with heights, but the observation deck is fully enclosed and does provide some great views of Bangkok through the large glass panes. There are maps and multimedia guides detailing landmarks that you can see in each direction and if you have children they will probably enjoy the experience. Going up in the glass-fronted elevator is also an experience in itself as it glides up the exterior of the building and allows you to view the city as you ascend the skyscraper. The observation deck is open weekdays from 10.30 until 22.00 and on Saturday and Sunday from 09.30 to 22.00.

If you are a bit braver than I was on my last trip to the Baiyoke Tower you can make your way to the Sky Walk on the 84th floor which is an open-air observation area (with safety cages). 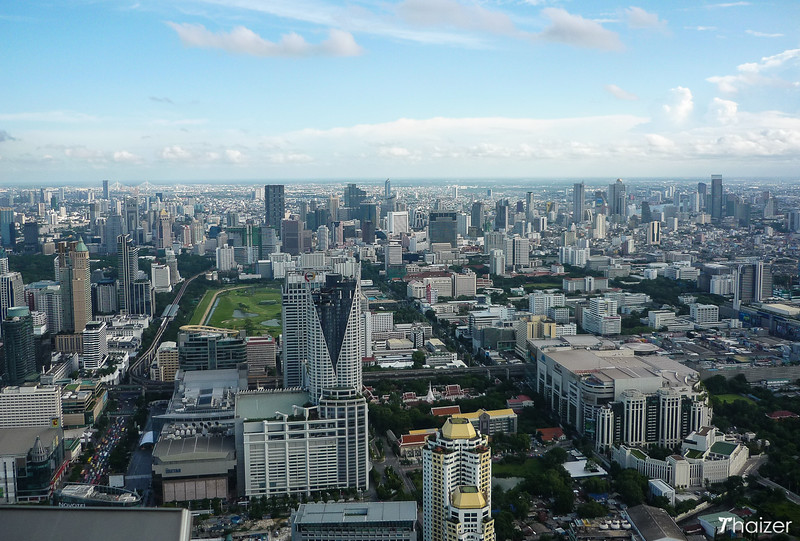 Dining and Drinking at the Baiyoke Tower

If you want to have lunch, dinner or enjoy a drink whilst you enjoy the views of Bangkok there are a number of options at the Baiyoke Tower. There is the Sky Restaurant on level 76 and 78 or you could try the Crystal Grill on level 82 or the Rooftop Bar and Music Lounge on level 83.
Bangkok rooftop bars and restaurants »

Getting to the Baiyoke Tower and Sky Hotel

The Baiyoke Tower is located at 222 Ratchaprarop Road, which is to the north of Bangkok’s central Siam shopping area. The two nearest Skytrain stations are Phya Thai or Ratchathewi but it is still approximately a 20-25 minute walk to the Baiyoke Tower and in the Bangkok heat I would advise taking a taxi or tuk-tuk (or local bus if you can speak some Thai). If you are travelling in from the Banglamphu or Ratanakosin areas you could also consider taking the canal boat taxi along the Khlong Sen Seb. These longtail canal boats aren’t recommended for the nervous first-time visitor to Bangkok, but they can be a great way to get around parts of the Thai capital. You will need to get off at the Pratunam boat stop and walk north along Rajadamri to get to the Baiyoke Tower. If you enjoy shopping you may like Pratunam Market which is close to the Baiyoke Tower. Pratunam is mainly a wholesale market but it is a lively area and you can still buy individual items of clothing. A visit to the Baiyoke Tower could also be easily combined with a trip to Jim Thompson’s House.

Room With a View at the Baiyoke Sky Hotel

Prices for rooms at the Baiyoke Sky Hotel vary according to the room size and how high up you are. The rooms in the ‘sky zone’ are usually charged at a higher rate.