For many non-Thai visitors, the reason for a trip to the northern border town of Mae Sai is usually a visa run. Travelling to Mae Sai from Chiang Mai or Chiang Rai can easily be done as a day trip, but if you are travelling on to the Golden Triangle or other areas of Chiang Rai province, an overnight stay in Mae Sai is an option. The choice of accommodation in Mae Sai isn’t huge and on a trip to the town last week I opted for a one-night stay at Top North Hotel. 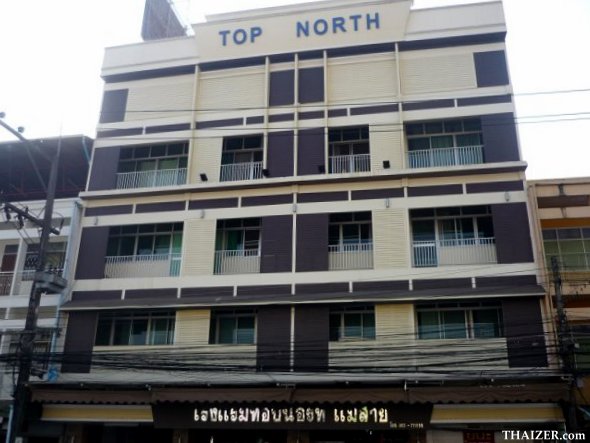 Front view of the Top North Hotel in Mae Sai

The Top North Hotel looks reasonably modern from the outside, but once inside the rooms are dated and desperately in need of a lick of paint and general sprucing-up. I stayed in one of the cheaper standard fan rooms with twin beds and for around 400 Baht a night I wasn’t expecting luxury and in many ways the hotel was typical of other budget accommodation found in towns and cities throughout Thailand. Although the room was on the scruffy side and had no natural light, the bed was comfortable and the linen was clean. One good thing about no natural light in the room was that it was surprisingly cool and I didn’t even need to use the fan during my stay in the January cool season. Bonus points also for the clean towels and free drinking water as well as the small television set which had satellite channels. For ultra-budget rooms in Thailand, such features aren’t always standard.

The main issue with my room was with noise from other guests. The walls are thin and in the cheaper rooms the noise from the corridors just reverberates. If you stay here, don’t forget your earplugs. Alternatively, pay the extra Baht for a room with a view and balcony because these seem to be much better screened from the noisy corridors.

The man checking me in didn’t seem to know what he was doing, but it looked like I arrived when the usual reception lady was on a break and he did (eventually) sort things out. Apart from that I didn’t have any dealings with the staff during my one night stay and check-out was just a case of handing back the key. There is a small coffee shop and restaurant in the lobby area, but I ate and drank elsewhere so can’t pass comment on the quality. I stayed in a room on the third floor and the complimentary wi-fi was very efficient. I didn’t use it much, but when I did it worked well.

The location of the Top North Hotel is excellent, situated just yards from the Thailand/Burma border crossing on the main Thanon Phaholyothin road. If you arrive at Mae Sai bus station, a local songthaew (15 Baht per person) brings you to a drop-off point which is almost directly outside the Top North Hotel. Similarly, if you need to go back to Mae Sai bus station, the songthaew starting point is just yards away on the other side of the road.

With food stalls and the markets virtually on the doorstep and the border crossing point a stone’s throw away, the location is very convenient.

The location and price are difficult to beat, but the noise from other guests means I wouldn’t want to stay in one of the cheaper rooms again. For one night it was OK and it will probably serve most people’s purposes if you want somewhere cheap to rest your head for the night. However, if you’re a light sleeper or like more home comforts then this probably isn’t the hotel for you.