One of Bangkok’s most notable landmarks, the Ananta Samakhom Throne Hall has played an important role in Thai history. Formerly a reception hall within the Dusit Palace complex, the Ananta Samakhom Throne Hall was used as the headquarters of the People’s Party during the 1932 revolution which saw Thailand (then called Siam) transformed from an absolute monarchy to a constitutional monarchy. 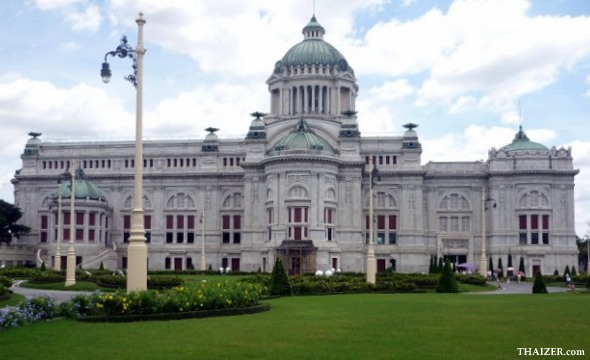 Most of the year, the Renaissance-style building and grounds are open to the public and even if museums aren’t normally your thing, the scenic garden setting in the Dusit district makes for a peaceful respite from some of the other more manic areas of Bangkok. Although the Throne Hall is now mainly used as a museum, it is sometimes closed to the public for state occasions or special events such as Chulalongkorn Day and His Majesty the King’s birthday.

The concept of the building was conceived in 1906 during the reign of King Chulalongkorn (Rama V) with the design inspired by King Rama V’s visits to Europe where he greatly admired the European palaces he saw. Italian architects were commissioned to design the Throne Hall and Italian marble was used in the construction. Italian artists also worked on some of the artwork inside the building which includes depictions of the Chakri Dynasty from King Rama I to King Rama VI. King Chulalongkorn (King Rama V) died in 1910, five years before construction of the Throne Hall was completed.

Following the revolution and the end of the absolute monarchy, the first National People’s Assembly convened at the Throne Hall in June, 1932. The building was subsequently used as Parliament House up until the mid-1970s before being opened to the general public as a museum.

The Throne Hall is open Tuesday-Sunday (closed Mondays) from 10.00-18.00. Other dates when the museum is closed include New Year, Songkran (April 13-15), Chulalongkorn Day (October 23), His Majesty the King’s birthday (December 5) and Her Majesty the Queen’s birthday (August 12).

This is an important state building and strict dress regulations are in place for visitors so no shorts, bare shoulders or skimpy clothing. Sarongs are available to buy (40 Baht) for visitors whose dress is deemed inappropriate. Entrance fee is 150 Baht. Photography is allowed outside the Throne Hall and museum, but is prohibited inside. 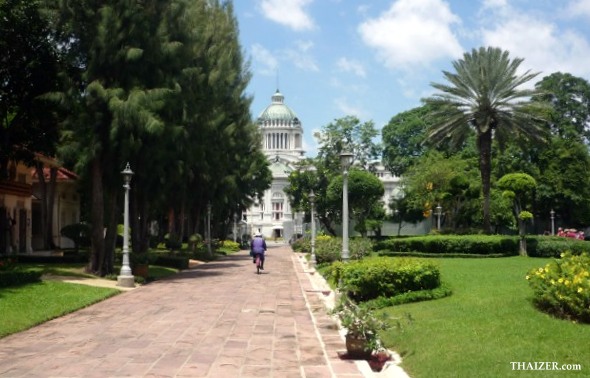 ornamental gardens to the rear of the Throne Hall

Ananta Samakhom Throne Hall is located in the Dusit district of Bangkok. The distinctive dome-shaped building comes into view as you approach from Ratchadamnoen Nok with the Royal Plaza and Equestrian Statue of King Chulalongkorn located in front of the Throne Hall. There are no Skytrain or metro stations nearby and the easiest way to get here for most overseas tourists will be by taxi-meter.