If you are visiting Bangkok and looking for a family attraction away from the tourist crowds, pay a visit to the highly recommended Ancient Siam park. Located just outside of Bangkok, this attraction may still be referred to by its original name of the Ancient City (Muang Boran), but as it has grown in size it is probably more accurate to call it by its new name of Ancient Siam. The park has been described as one of the world’s largest outdoor museums. Located to the south-east of Bangkok in the Samut Prakan district, the landscaped park is shaped like a map of Thailand with replicas of important buildings and sites located within the park according to their correct geographical location. For instance, the north-eastern part of the park is home to Preah Vihear whilst a replica of the Grand Palace can be found in the central region. Some of the buildings are full-scale replicas whilst others have been scaled down, but experts from the National Museum ensure that the replicas are historically accurate. As well as the ancient historical replicas there are restaurants, food and drink outlets and even a Floating Market so there is plenty to keep you occupied. 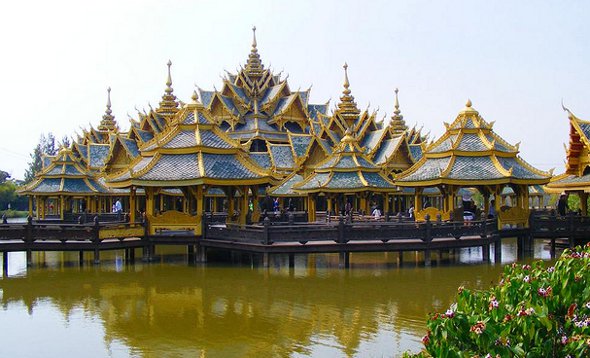 The park was the brainchild of Lek Viriyaphant who, in the early 1960s, had originally planned to construct a golf course featuring miniature replicas of ancient Thai buildings. The scheme changed the more Lek researched and saw the way that some of Thailand’s ancient historical buildings had been neglected. Instead of a golf course he decided the park would be an educational area preserving Thai culture and historic building techniques. Today, Ancient Siam is home to a dedicated team of local artisans who work alongside experts from the National Museum of Thailand to help preserve Thailand’s cultural heritage.

Getting Around the Park

The park covers a very large area and although you can see much on foot I would recommend hiring a bicycle or golf buggy to take you around if you want to get the most out of your visit. Trams also run around the site. Cars and mini-buses are allowed into the park (for a fee), but if you are visiting as part of an organised tour transport within the park may be included in the price you’ve already paid. Maps of the park are available at the entrance kiosk.

How to Get To Ancient Siam

Any tour operator in Bangkok can arrange a trip to Ancient Siam (note that some will still call it Ancient City or Muang Boran), but it’s also quite straight-forward to arrange your own transport there and back. The journey normally takes around one hour from central Bangkok to the Ancient Siam park, but may take longer depending on traffic.

By Taxi
Cost will depend on your negotiating skills and where you are staying in Bangkok, but expect to pay in the region of 800 to 1,000 Baht for a round-trip journey.

By Bus
Air-conditioned buses operated by Bangkok Mass Transit Authority (BMTA) run to Samut Prakan. If you are travelling from Banglamphu (Khao San Road area) or Sukhumvit, look for bus number 511 which goes to Samut Prakan. The bus will terminate in Samut Prakan and then you need to take a local songthaew (number 36) which runs past the entrance to Muang Boran Ancient City. Total round-trip cost per person approximately 80 Baht.