Animals of the Thai Zodiac and the Twelve Year Cycle

In traditional Thai culture, special birthdays and anniversaries are celebrated in twelve year cycles linked to the signs of the zodiac. Similar to the Chinese zodiac there are twelve animals each representing a year: rat, ox, tiger, rabbit, serpent (dragon), snake, horse, goat (ram), monkey, rooster, dog and pig. For Thai people, the completion of each twelve year cycle is important because it brings them back to their birth-year animal. It used to be the case in Thailand that birthdays weren’t really celebrated unless they were special ones that coincided with the 12-year cycle (particularly the 12th and 60th birthday). However, things change and nowadays the modern generation of Thai people increasingly celebrate annual birthdays rather than just those that fall on a 12-year cycle. Similarly, a 30th, 40th or 50th birthday or anniversary is also likely to see added celebrations just as they would in the West.

This year and next year are significant for Thailand as they mark special royal occasions. His Majesty the King of Thailand will be 84 on December 5 2011, an occasion which marks the Thai monarch’s seventh cycle. July 2012 also sees the 60th birthday (5th cycle) of the king’s son, HRH Crown Prince Maha Vajiralongkorn, whilst Her Majesty the Queen will celebrate her 80th birthday in August 2012. This trio of royal anniversaries will be celebrated with special events and ceremonies throughout Thailand. His Majesty the King was born in the Year of the Rabbit so visitors to Thailand can expect to see depictions of rabbits cropping up amongst the various festivities. I took the photo below at the Chiang Mai Flower Festival earlier this year. The float was a floral depiction of HM the King and his birth-year animal, the rabbit. The purple figure below the king’s portrait is a guardian warrior known as yaksha which protects the good and keeps away evil spirits. 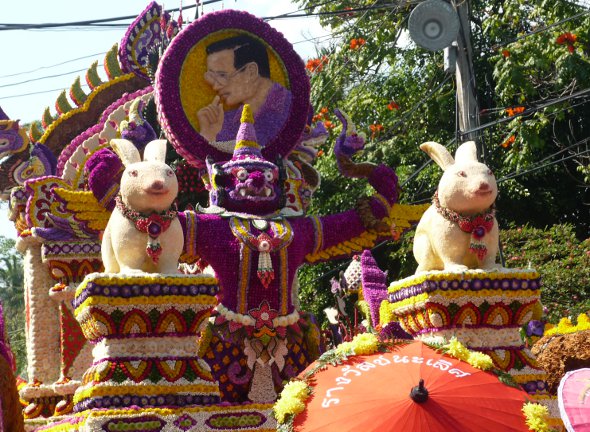 There are also a number of temples which have extra significance for Thai people. Mainly located in northern Thailand, each temple has associations with the Lord Buddha (he either visited them or the temples carry relics) and are now linked with a specific animal of the zodiac. Many Thai people will make a special effort to visit their sacred birth-year temple at least once in their liftime, especially if it falls during a 12-year birthday cycle because it is believed to bring extra merit and good luck. For example, Doi Suthep in Chiang Mai is associated with the Year of the Goat (Ram). If you hear a Thai person talking about wanting to make a special pilgrimage to visit ‘their temple’ then this is probably what they mean.