You are here: Home / Arrival / How to Catch a Taxi From Bangkok Airport 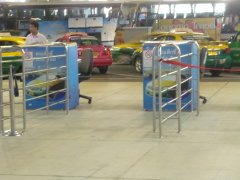 Passengers arriving at Bangkok international airport (Suvarnabhumi) enter the arrivals hall on Level 2 which is where the public taxi rank was formerly located. However, the public taxi rank has now been moved down a level so if you want to catch a public taxi (known as a taxi-meter) you will now need to go down to Level 1.

Note that although there are taxi services available on Level 2, these are the more expensive limousine services from AOT (Airports of Thailand) and will cost you more than double the price of an ordinary taxi. In addition to the official limousine service operated by the airport authorities, a number of unlicensed taxi touts also continue to operate on Level 2. This is despite supposed crackdowns by the authorities. If you want to catch a licensed public taxi ignore the touts asking ‘where you go’ and simply make your way down to Level 1. The information below relates to the licensed public taxi meter service.

How the Taxi Service Operates

The taxi service at Bangkok airport has improved recently with more desks being added which seems to have resulted (temporarily at least) in shorter queues. There are currently two different ranks depending on which door you exit on Level 1, but both ranks operate in the same way so it doesn’t matter which one you go to. You line up at one of the desks (pictured above) and tell the dispatcher your destination who will then advise the driver. 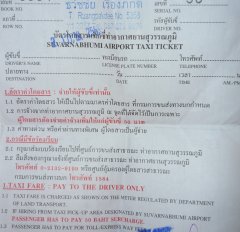 A ticket will be filled out and a copy will be given to you (pictured right). This will detail the driver’s operating license number and also has telephone numbers and addresses to contact should you have a problem or complaint so make sure you retain the ticket. The ticket also clearly explains in Thai and English how your fare will be calculated.

How Much Will I Be Charged?

For destinations in Bangkok you will be charged on the meter rate which is in itself regulated by the Department of Land Transport. Note that the flag-fall charge is 35 Baht which will be displayed on the meter when you start the journey. If you travel via the express-way you will have to pay the tolls. As an example, a trip from the airport to Silom, Sukhumvit or the Riverside area will typically involve two tolls; one at 25 Baht and one at 45 Baht. The meter trip for this journey would be approximately 240 to 280 Baht. On top of the meter charge of 240 to 280 Baht you will also need to pay the fixed airport surcharge of 50 Baht. Therefore, for this trip you can expect to pay:
Meter charge â€“ 280 Baht (approximately)
Express-way tolls â€“ 70 Baht
Airport pick-up surcharge â€“ 50 Baht
Total = 400 Baht

Pay the driver at the end of the trip. Tipping taxi drivers isn’t customary so it’s up to your personal discretion.

Journeys Outside of Bangkok

For journeys outside of Bangkok you will usually be charged a flat rate fare and not on the meter. For example, a trip to Pattaya is/was 1400 Baht (taxi driver pays express way tolls).

The dispatchers usually speak good English, but you may also find it helpful to have a print-out of your destination address (in Thai) or a telephone number just in case. Most Bangkok airport taxi drivers only have a limited use of English but the dispatcher will tell the driver your destination so it isn’t a problem.