Arriving on Ko Samui from a Cruise Ship 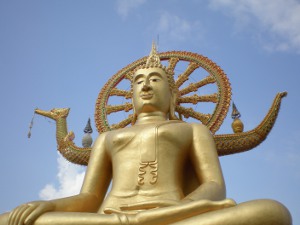 If you are a passenger on a cruise ship docking at Ko Samui in Thailand, you may have a half-day or at least a few hours to do some sight-seeing on the island. Cruise ships will offer their own tours and trips, but although these can be convenient they are also usually highly priced compared to arranging things yourself locally on arrival. The downside to a do-it-yourself approach is that you will need to negotiate a price with a taxi or songthaew driver when you disembark the ship. Arriving on a cruise ship means that drivers (and tour operators) will have a tendency to view you as a lucrative captive market and initial prices they quote will usually reflect that. In this situation, the opening offer from a taxi or songthaew driver will normally be high, so negotiating a mutually acceptable price is the best thing to do.

What to see on Ko Samui during a 3-hour stay

Cruise ships arrive in Nathon, a port on Ko Samui’s west coast, whilst most of the attractions that visitors are usually interested in seeing are located on the island’s east coast. Earlier this year a lady called Gill contacted me to say that she and her husband were arriving on Ko Samui via a cruise ship and would have 3 or 4 hours spare and wanted to see Wat Phra Yai (Big Buddha Temple), Wat Plai Laem, Chaweng Beach and Na Muang Waterfall.

Gill asked my advice for whether I thought this would be possible plus an idea of how much they should pay and how long it would take if they didn’t stay too long at each stop. In my reply I advised that although Ko Samui is quite small, they would still lose some time driving to and from the various sights. A typical tour would normally allow for 4 or 5 hours assuming the pick-up and drop-off point was on the east coast. The planned itinerary could be done in 3 hours from Nathon but it would be a whistle-stop tour. I suggested skipping the waterfall which, in my view, isn’t that impressive.

How much should a private tour cost?

In terms of price, it really is difficult to say. When the cruise ships arrive in port on Ko Samui, the taxi and songthaew drivers that meet them tend to automatically up their prices based on supply and demand. The same can also be true for tour offices and travel agents in Nathon with lots of people arriving off the cruise ship looking for taxis or half-day tours. Under normal circumstances a visitor to Nathon can expect to pay around 1,800 Baht for a private taxi for the itinerary described above. However, on cruise ship arrival days you can add at least another 500 Baht on top of that. Songthaew drivers on Ko Samui are a law unto themselves when it comes to negotiating prices for a private itinerary, but will normally be slightly lower than the price for an air-conditioned taxi. When negotiating with a driver, make sure you are both clear on the final agreed price. The money is paid to your driver at the end of the trip and not before (unless you are booking via a tour office who may ask for payment in advance).

I also asked the couple who contacted me if they’d be kind enough to let me know how they got on once their trip was over which they duly did. Gill said that whilst on board the ship they had got to know a waiter who was from Thailand (Phuket). The Thai waiter agreed with my advice that the waterfall wasn’t worth the extra time with only a few hours on the island and he too recommended dropping that from the itinerary. The Thai man also suggested not paying more than 1,500 Baht for a 3-hour tour to include the three main sites they wanted to see. When Gill and her husband first stepped on shore and asked about prices, local drivers were quoting 3,500 Baht. After hard negotiation, and walking away from some offers, they finally got one driver down to 1,500 Baht (after he had dropped from 3,500 to 3,000 to 2,500 to 2,000 to 1,800 before finally agreeing to 1,500 Baht). Apparently, the driver didn’t speak much English but that wasn’t a problem. He took Gill and her husband to all the places they wanted to go and let them explore at their own pace. Their visit to Wat Phra Yai (Big Buddha), Wat Plai Laem and Chaweng Beach took around 2.5 hours and on arrival back at Nathon they paid the driver the agreed 1,500 Baht and also added a tip for his good service.

In situations like this there is no set price and if you are arriving on Ko Samui from a cruise ship how much you pay for a similar itinerary to Gill’s will depend on luck, your negotiating skills and supply and demand on the day. Don’t be afraid to haggle, but do it with a smile and not aggressively. Even if you don’t get as good a deal as Gill and her husband, arranging things yourself locally on arrival should still be much lower than the price offered by the ship’s own tours. And if you can group together half a dozen or so fellow cruise ship passengers then hiring a songthaew becomes even better value.