Located on the fringe of Bangkok’s Chinatown district, Bangkok railway station is the main rail terminus for the Thai capital. Many Thai people refer to the station by its official name of ‘Krungthep’ although there are some locals who call it Hua Lamphong which was the name of a local road and canal that were here before the station was built. Hua Lamphong train station is also the name often used in English language websites and city travel guides.

History of Bangkok railway station
Construction of the Bangkok railway station began in 1910 during the reign of King Rama VI with the building officially opened on June 25, 1916. Although Dutch architects collaborated on the project it is the Italian architect, Mario Tamagno, who is given most credit for the neo-classical design of the railway building. Tamagno also worked on several other projects in Bangkok in the early 1900s including the Ananta Samakhom Throne Hall. Initially, Bangkok railway station was used as both a passenger and freight terminal. In 1960, the station was redeveloped to be used solely as a passenger terminal.

The vast majority of train services departing from or arriving in the Thai capital use the main Bangkok railway station at Hua Lamphong. There are exceptions though with some local services, including those to and from Kanchanaburi and the River Kwai, using the smaller Thonburi station (Bangkok Noi) across the other side of the Chao Phraya River.

Trains usually depart on time from Bangkok train station, but arrivals are often late (by an hour or more) on long distance routes so use the arrival times shown on train timetables as an estimate rather than a guarantee. Computerised real-time arrivals and departure boards are displayed at the station. 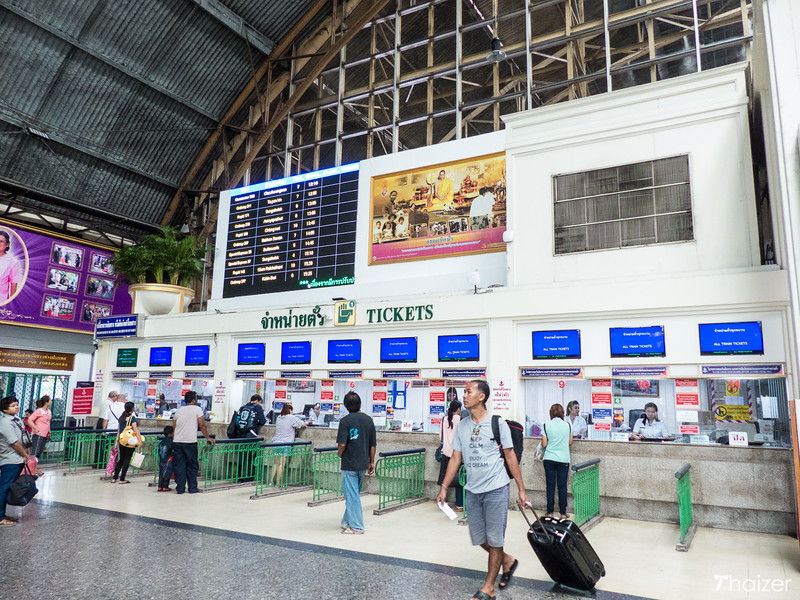 Buying a train ticket at Bangkok Hua Lamphong station is relatively straight-forward with lots of information available in English as well as Thai. Although the process of buying a ticket is easy enough, the fare system is more complicated with supplements added depending on the type of seat and class of train. Please note you may also be asked to show your passport when purchasing tickets.

Ticket office for tourists
Bangkok railway station has recently opened a dedicated ticket office for foreign tourists. If you enter the station concourse from the front, the ticket office is in the far left-hand corner. The office is run by the State Railways of Thailand (SRT) and uses English-speaking staff to help overseas visitors. The office sells 1st and 2nd class tickets for same-day and advance travel on most trains. The cheapest tickets for 3rd class trains are not available from here and must be bought from the counters outside. Combined train/ferry tickets to popular destinations including Ko Tao and Ko Samui can be purchased here as well as combination train/bus tickets to Krabi and Phuket. The office also sells tickets for some of the special weekend excursion trains run by SRT. Because the office is run by SRT there are no outside agency fees and you pay the standard ticket price. 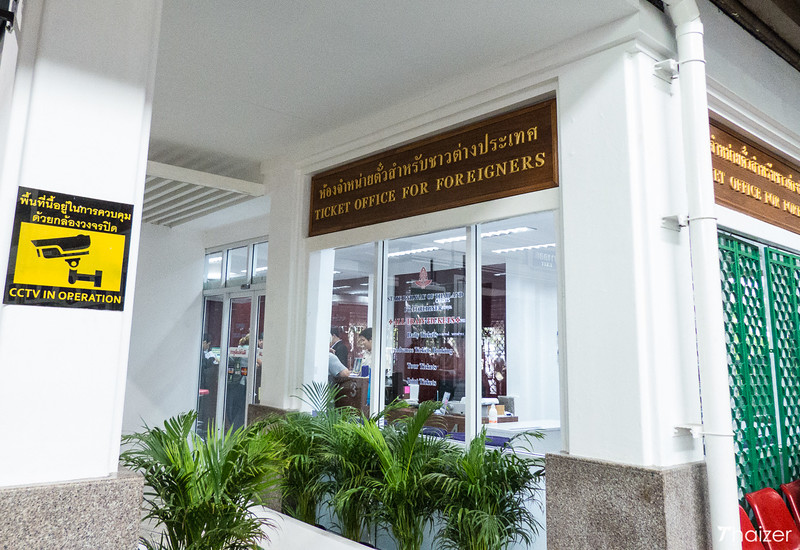 Tickets for same-day travel
Tickets for same-day travel can be purchased from the main ticket counters. Display screens above each counter describe in Thai and English what trains you can buy tickets for although the screens will often show ‘all trains’ rather than specific destinations. If you’re intending to travel on the cheapest 3rd class train services, the earliest you can normally buy tickets is an hour before departure.

Tickets for advance travel
To buy a ticket for advance travel, you may find it more convenient to use the dedicated ticket office for foreigners. As mentioned above, entering the station from the front this office is in the far left-hand corner. However, you can also go to the advance booking office which is open daily from 8am-4pm and located in the far right-hand corner of the station. You’ll need to get a queue ticket from the machine and then wait for your number to be called. There are also some ticket windows on the main concourse that sell advance tickets, but from previous experience these tend to be closed more often they are open.

In many cases you can book train tickets on the same day you travel. But during peak season and on popular routes (e.g the overnight sleeper service from Bangkok to Chiang Mai) this may not always be the case. Many trains are also booked out well in advance over the long New Year holidays at the end of December and again in mid-April for Songkran. If you have confirmed accommodation or have to be at a certain destination on a specific date, it’s advisable to pre-book your train tickets regardless of the time of year. This can be done in person at any main station in Thailand with booking clerks using SRT’s computerised system. The State Railway of Thailand used to operate an online e-ticketing service, but that is currently unavailable. Selected ticket agents can also pre-book tickets for you. This is the list of ticket agents approved by SRT.

Bangkok train station does attract some scam artists and touts. Be on your guard, but don’t be paranoid. There are people wandering around with official looking badges who don’t work for SRT. Instead, they are getting paid commission from hotels, taxi companies and tour agents to attract customers and will often make a beeline for tourists carrying luggage. It’s best to go the official information and ticket counters and speak to SRT staff if you need assistance. There are a few tour offices located on the second floor of the station who can book hotels and onward travel for you. They may also offer to sell combination train/ferry tickets although they will usually charge a premium compared to buying direct from SRT counters. 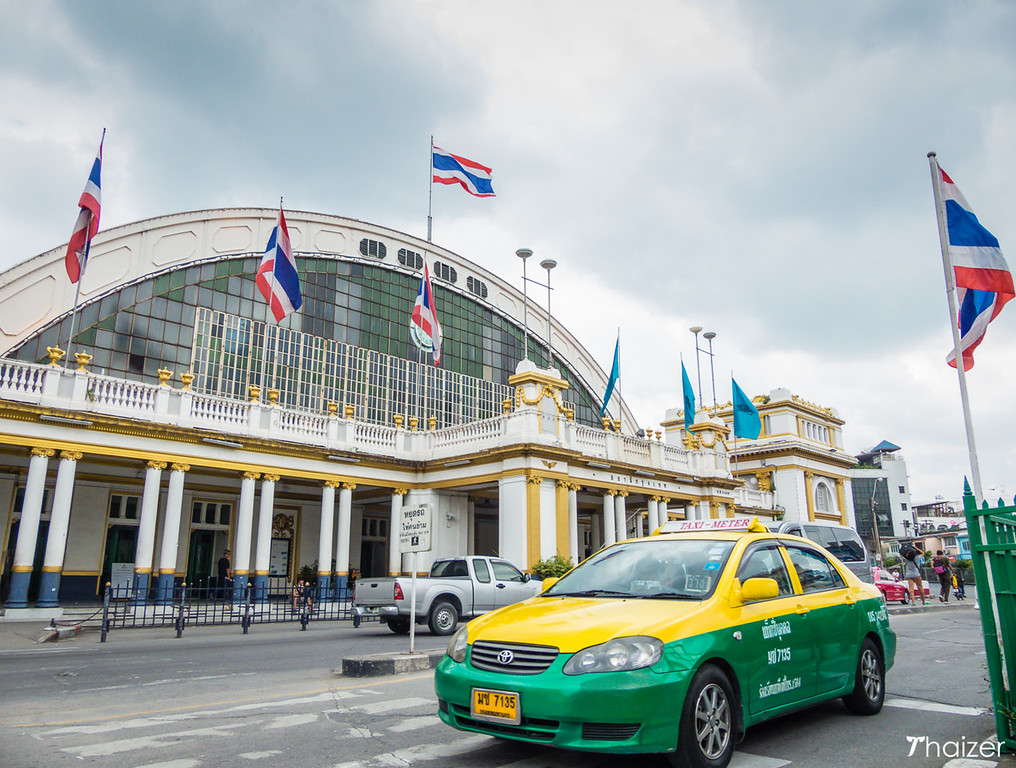 Looking at the station from the front, the taxi rank is outside the station on the left. Tuk-tuks also congregate in this general area with buses a short walk further back. Taxis should use their meter, but for tuk-tuks you will have to negotiate a price and it will normally work out more expensive than taxis. The other option is to take the modern and efficient metro which connects to Hua Lamphong.

The MRT metro system is open daily from 6am to midnight. The routes currently in operation are limited, but the metro does connect with the BTS Skytrain system and can be very convenient depending on where you are travelling to or from in Bangkok. Be prepared to open your bags for a quick security check when entering MRT metro or BTS Skytrain stations.

If you are heading in to Bangkok by train from the north or north-east, you can get off at Bang Sue train station and connect with the MRT metro there. However, at the time of writing this doesn’t work so well the other way round and you may find it more convenient to board trains heading north at Bangkok Hua Lamphong rather than Bang Sue. There are future plans to start more long distance trains from Bang Sue so this situation is likely to change as facilities and services at Bang Sue are upgraded.

Many train services to and from the north call at Don Muang station. In theory this makes it an easy way to travel between Bangkok Hua Lamphong and Don Muang, but the reality is trains are often late and services are infrequent. Whilst trains between Bangkok Hua Lamphong and Don Muang are an option, generally it’s more convenient to use the airport bus or take a taxi. If you do use the train, an overhead walkway from the station connects to the airport at Don Muang. It used to be a short walk from the train station to the airport check-in desks, but with the new terminal buildings opened at the end of 2015 this can now involve a bit of a trek.

It’s fair to say that Bangkok train station isn’t food heaven, but there is a reasonable Thai restaurant, coffee shops, a few fast-food options and mini-markets to keep you going. Refreshments are also available from mobile vendors on the platforms and the enterprising vendors that board the trains at various stations along the route selling drinks and Thai snacks.

Since mid-2014, the sale and consumption of alcohol has officially been banned at SRT stations and on trains. How rigorously this ban is enforced may vary depending on the route and the discretion of the train staff. I’ve heard recent accounts from friends who say they had no problems drinking beer they’d brought with them for the journey on the overnight sleeper train from Bangkok to Chiang Mai. However, all passengers should be aware that it is an offence under Thai law to sell or buy alcohol on trains and at stations and can be punished with a 10,000 Baht fine or even imprisonment. 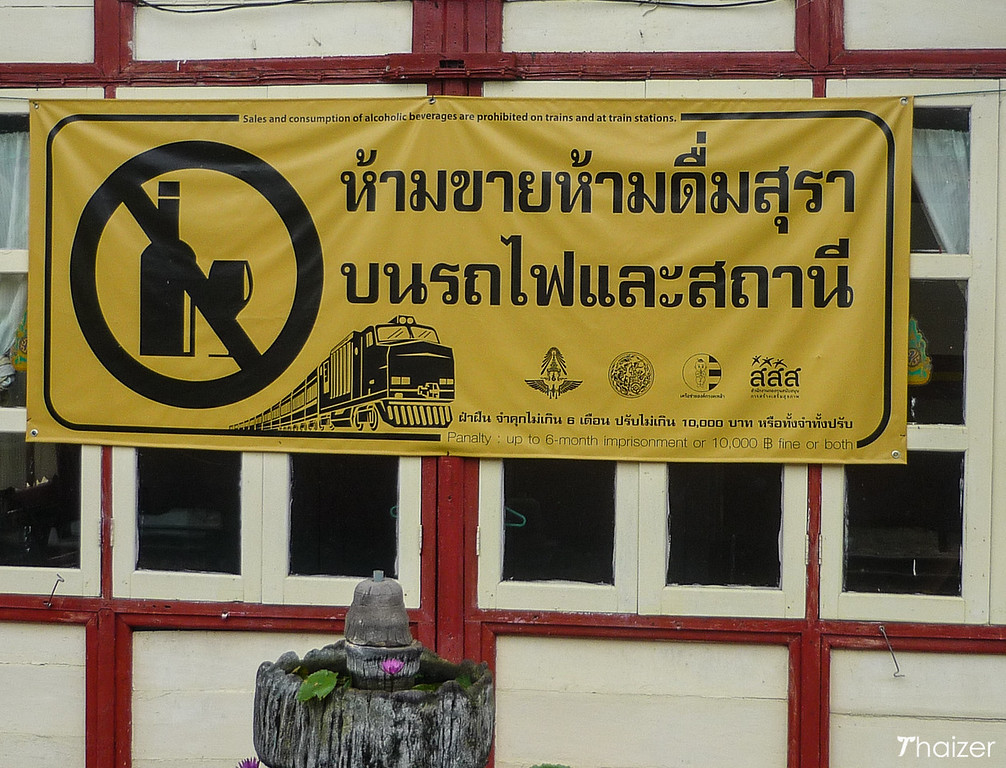 Toilets and showers are located on the far right hand side of the station with signs in English as well as Thai. Take some small coins with you to pay for use of the toilet (3 Baht) or shower (10 Baht). Passengers can also get a Thai massage at shops located inside the main station building.

As you enter the front entrance of the station, the left luggage office is just to the left near the ATM machines. Open daily from 4am-11pm, prices depend on the size and weight of your bag. Smaller bags weighing less than 10kg cost 20 Baht per day. For larger bags and backpacks weighing more than 10kg expect to pay between 40-80 Baht per day. 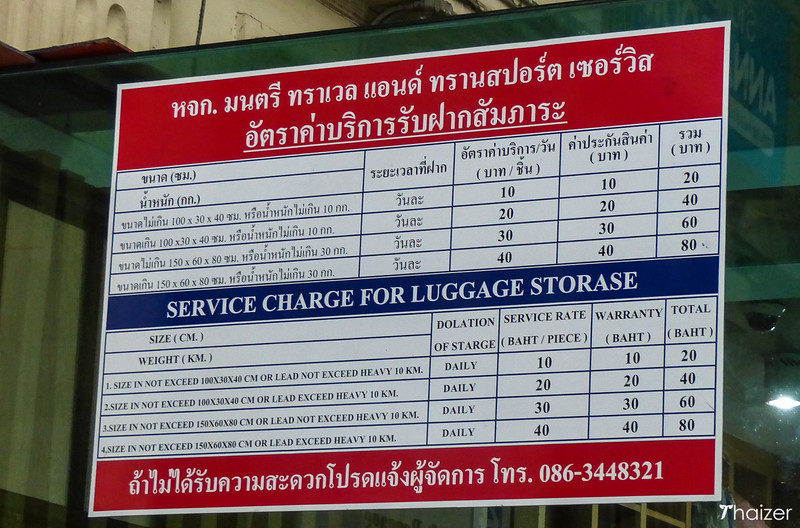 The Thai national anthem is played over loud speakers at the station at 8am and 6pm. Please show your respect by standing as the Thais do. You may also notice a separate seating area at the front of the station concourse which is only for the use of Buddhist monks. Signs in Thai and English explain that the seating is not to be used by the general public.