Bangkok taxis operate on a meter system with fares set by the Department of Land Transport. Although Bangkok taxi fares are regulated, there are some important things that visitors to the Thai capital need to take into consideration when hiring a cab. 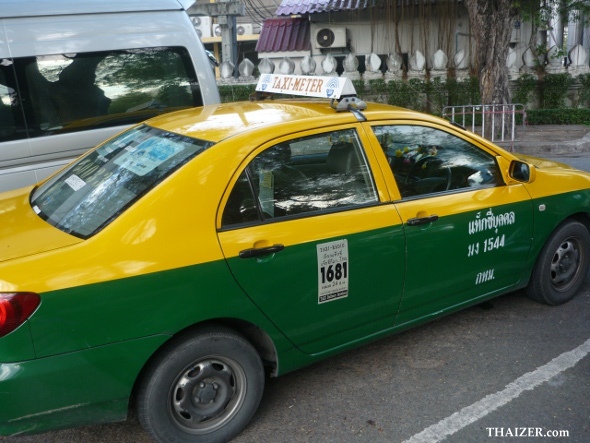 Not switching on the meter

Some tourists complain that drivers refuse to switch on the meter or the driver says that the meter is ‘broken’. These are invariably the taxis parked up outside tourist attractions and hotels. The driver will usually try to negotiate a fixed fare rather than use the meter. If you don’t want to do that, the answer is simple; flag down a moving cab. If a cab is parked up outside a tourist attraction or hotel and the driver asks you where you want to go, you are almost certainly going to pay over the odds for that journey. It might not be a lot more and you may decide that the convenience factor makes it worthwhile so it’s your judgement call. However, if you want to ensure you get a taxi that charges the meter price you will need to flag down a moving cab.

How to hail a cab in Bangkok

Cabs that are available for hire will have a red sign illuminated in their front window. The polite way for asking a taxi to stop is to stretch out your arm with your palm facing downwards and move your arm slowly up and down. If for any reason the driver doesn’t want to use the meter, get out and wave down another taxi; there are thousands in Bangkok so it isn’t difficult to find one. Depending on where you are going from and to, there are times when the driver may know that he will be stuck in traffic if he accepts your fare so he may decline to pick you up. This can happen during rush hour or heavy rain, but just try another cab until you find one willing to pick you up.

I took the photo on the right during my time in Bangkok last month. The taxi had the rate card prominently displayed in the cab. Click on the photo for a larger image. 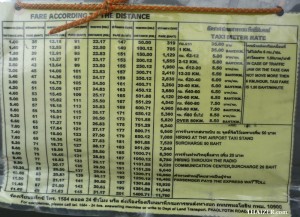 These fares are estimates; the exact fare will depend on traffic and any other surcharges noted below.

Most Bangkok taxi drivers don’t speak too much English beyond a few basic words and stock phrases so if you wave down a taxi in the street and start showing him your Lonely Planet map with street names in English, it isn’t going to be much use. If you know where you want to go, ask staff at your hotel or guest-house if they can write down the name in Thai and just show that to the taxi driver when you get in. If you are catching a taxi from Bangkok airport there are dispatchers who can speak English so there should be no problems.

In addition to the meter fare there are some extra charges that come into play, so don’t automatically assume the driver is trying to rip you off. The flag fare or starting fare is 35 Baht, but there are other charges that sometimes apply on top of the meter fare especially if you catch a taxi at Bangkok airport. However, there is no additional surcharge for night-time or ‘out of hours’ pick-ups.

If you take a taxi from the official ranks at Bangkok Suvarnabhumi or Don Muang airports, there is a surcharge of 50 Baht on top of the 35 Baht flag-fare. This won’t show up on the meter and should be paid in addition to whatever the final meter reading is when you reach your destination.

If you are travelling across Bangkok you may be asked if you want to take the express-way to avoid traffic. As they say in Thailand, ‘up to you’, but it’s usually the best option and will save time. Express-way charges vary from around 25 to 45 Baht. For example, travelling from Bangkok Suvarnabhumi airport into the Sukhumvit area of the city would incur two express-way charges; 45 Baht and 25 Baht. You are responsible for this fee. The driver will usually hand you the toll-way receipt.

Hiring through the radio service

If you, or somebody on your behalf, orders a taxi via the radio communication service there is a 20 Baht surcharge. For tourists this usually means your hotel or guest-house will call the cab for you. They may give you the option of an agreed set fare or you can opt for the meter fare plus surcharges. The latter should be cheaper. A cab called for you via the radio should be with you within 20 minutes.

Bangkok traffic is notorious and there may be times when you are stuck in a traffic jam (‘rot tit’) and this will be reflected in the fare. If the taxi is stationary or moving less than 6km/hour then the meter charge is 1.5 Baht per minute.

Why are Bangkok taxis different colours?

Bangkok taxis come in a variety of bright colours including orange, pink, blue, green and yellow. The colours represent different cab companies and you are free to flag down any one of these provided they have their red for hire light illuminated in the front window. 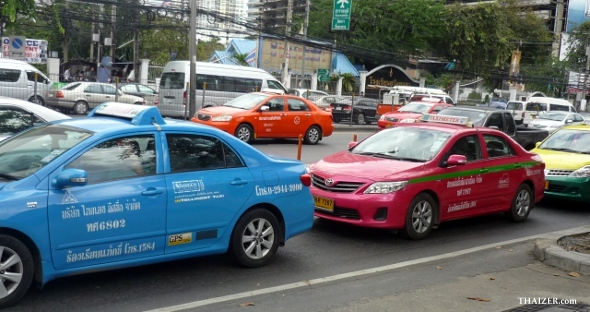 Under Thai law, seat belts are compulsory for drivers and front-seat passengers. This law is frequently overlooked by drivers and passengers outside of Bangkok, nevertheless it is a legal requirement and police do carry out random spot-checks.

If you use a taxi where you have agreed an all-in-fare (i.e not on the meter) there is no need to tip because the fare would already have been calculated in favour of the driver. If you take a taxi that does charge according to the meter, tips are at your discretion. For a short 10-minute journey I usually round up the fare if it’s convenient to do so (e.g. round up a 52 Baht fare to 60 Baht). For longer journeys to or from Bangkok airport to the city, a 30-50 Baht tip is reasonable, but if the driver is particularly chatty, enjoys talking about sport or makes me laugh I’ll tip a bit more. There are certainly some unscrupulous people in Thailand including some Bangkok taxi drivers, but in my experience these are in the minority. I’ve found most taxi drivers in Bangkok to be down-to-earth people trying to make an honest living for their family.