Children splash around in the pool. Parents laze on sun-loungers, briefly stirring to summon another cool drink from an elegantly dressed member of staff. Life is sabai sabai. It’s a scene that is replicated daily in resorts and hotels throughout Thailand. The same scene was being played out at the Swissotel Nai Lert Park Hotel in Bangkok when I visited there a few weeks ago. But I wasn’t staying at the hotel as a guest, I was there to see for myself one of Bangkok’s more unusual sights. Less than 100 metres away from where tourists were casually sipping on their Siam Sunrays is a small shrine, tucked discretely away and out of view of the paying guests. Approaching the shrine, you see the raised wooden spirit house decked with garlands of fresh jasmine and marigolds and the humid air hangs heavy with the fragrance of incense. The pathway leading to the shrine is flanked with cute pottery figurines of children that at first seem out of place given what you are about to witness, but when you think about it a little more, they are entirely in keeping with the story of the shrine. 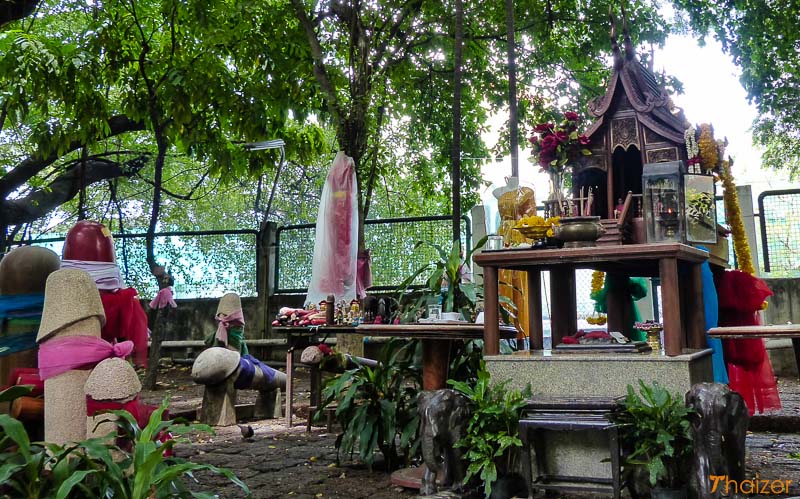 And then you see them. Wherever you look; your left, your right, in front. Small ones, big ones, size-of-a-refrigerator ones. Penises. Or lingams, to be more precise. I don’t know if there is a collective noun for penises; a phalanx, perhaps, but there are hundreds of them on view here. Crafted from stone or wood, many of the lingams are swathed with colourful sashes. Some of the wooden ones have been painted red and rest beside the base of a large tree, whilst the stone ones stand tall and proud closer to the spirit house. 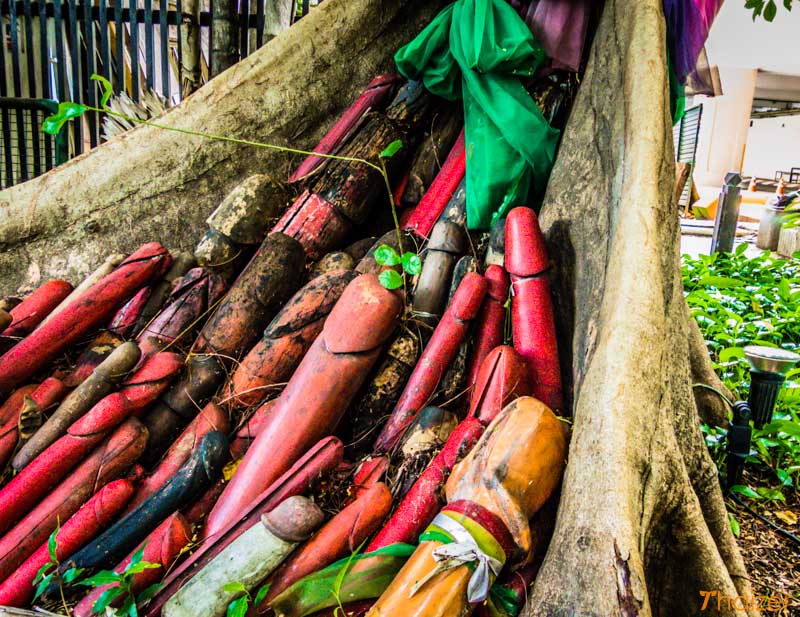 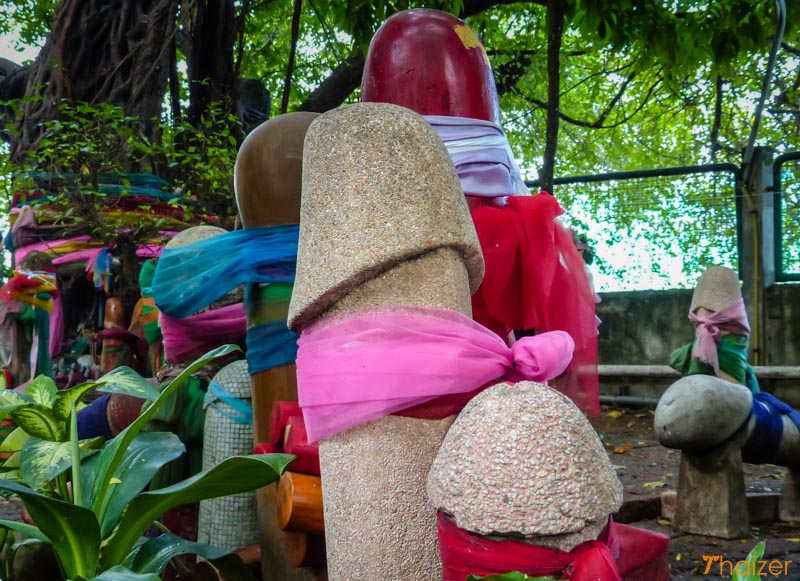 But why are they here? As is often the case in Thailand, there are different explanations depending on who you talk to and who you believe.

The Legend of Chao Mae Tuptim

A plaque at the entrance to the shrine reads:

The origins of Chao Mae Tuptim are obscure. It can only be recalled that a spirit house was built by Nai Lert for the spirit who was believed to reside in the large Sai (Ficus) tree.

The basic offerings are fragrant wreaths of snow-white jasmine flowers, incense sticks, pink and white lotus buds. Chao Mae Tuptim has received yet another, rather less conventional kind of gift, phallic in shape, both small and large, stylised and highly realistic. Over the years they have been brought in their thousands and today fill the area around the shrine. Confronted by the extraordinary display the shrine has automatically been concluded to be dedicated to fertility.

The words on the plaque only hint at the folklore that has built up around this particular shrine. Nai Lert (1872-1945) was a Bangkok businessman who originally owned this land as well as other areas of land in the Ploenchit area of Bangkok, including the site of the British Embassy a short walk away. One story says that Nai Lert found a spirit house floating in the khlong (canal) behind his land. He fished it out and erected it on his property. Whether that is true or not or whether he simply had a spirit house made, one has been in place here since approximately 1920 and was erected to honour the female spirit, Chao Mae Tuptim, who is said to reside in one of the trees adjacent to the spirit house. According to some stories that have been handed down over the years, soon after Nai Lert placed the spirit house on his land, one lady who made an offering at the shrine fell pregnant shortly after her visit. Word spread and before long the shrine was attracting women who wanted to conceive. Lingams were brought as a traditional sign of fertility, but the shrine also has an assortment of other items including miniature figures of elephants, horses and dancers. The keen-eyed will also notice that beyond the plethora of penises are more feminine offerings including necklaces, combs, hair-bands and dresses which are all there for the benefit of Chao Mae Tuptim. There is even an old filing cabinet, but I have no idea whether that is for the use of Mae Tuptim to keep records of who has visited her or whether it has just been dumped there at some point in time. This is Thailand, so both options are possible! 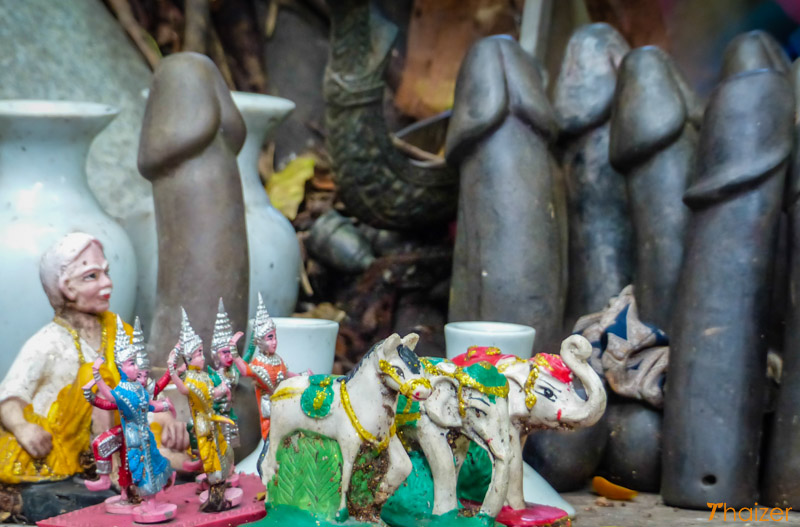 Although Thailand is a predominantly Buddhist country, it is also a country where Hindu and animist beliefs co-exist alongside more traditional Buddhist practices. The Thai spirit house is a classic example of something which is animist in origin and they can be seen throughout Thailand. You don’t have to look far for signs of Hindu influence too, with statues of Ganesh a common sight at Buddhist temples and outside a number of businesses. The phallus or lingam is a symbol of the Hindu god Shiva and is sometimes worn by Thais, men and women, in the form of ‘paladkig‘ a sort of lucky charm which may be worn discretely (or not so discretely is some cases) around the waist. This phallic symbol is associated with fertility and virility, but they also have a reputation for protection and for bringing good fortune so you do occasionally see lingams in small shops in Thailand and independent businesses. Away from Bangkok, probably the most famous example of lingams seen by tourists in Thailand is at Phra Nang Cave in Krabi. Sometimes the monkey god, Hanuman, is also depicted on the phallic symbol and there are examples of this style of lingam at the shrine to Chao Mae Tuptim. 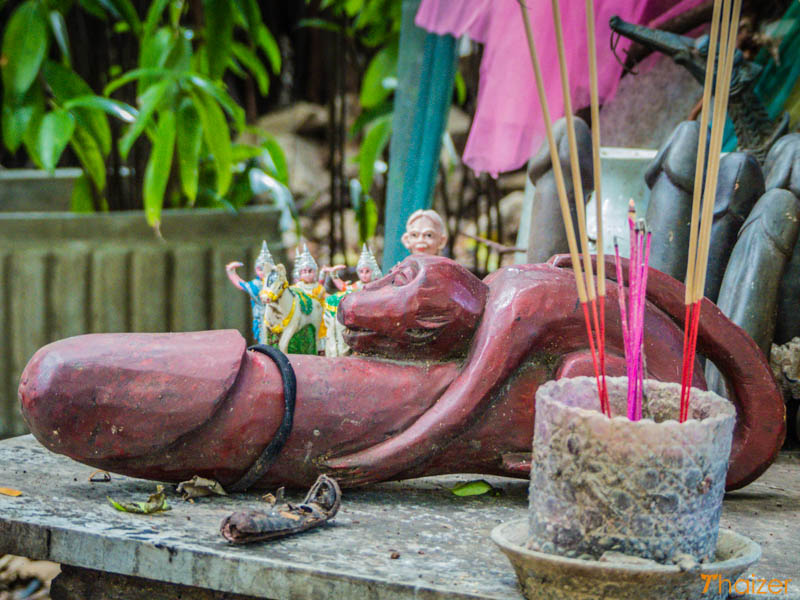 The hotel doesn’t openly advertise the Chao Mae Tuptim Shrine and although foreign visitors are welcome to visit, it shouldn’t be forgotten that this is a shrine and as such should be treated with appropriate respect. The shrine is located on a very small patch of land inside the grounds of the Swissotel Nai Lert Park Hotel* and can be difficult to find. I asked the security staff at the entrance to the hotel and even though they gave me clear directions in Thai I still nearly went the wrong way and had to ask another member of staff. If you look at the hotel from the front, the shrine is outside on the far right-hand side. You don’t actually have to enter the hotel, but you do need to walk up the driveway and then down a pathway that brings you to a service road which in turn leads you through a covered parking area towards the shrine. It is difficult to explain the exact location because of the layout of the hotel, but if you mention Chao Mae Tuptim to a staff member, they should be able to direct you. Another route, which is easier to explain, is to walk through the hotel lobby and then down the steps towards the outdoor swimming pool. Once outside you then need to turn right until you see the service road. Walk back on yourself so that you have the tennis courts and fitness area behind you and you are walking towards the canal. You’ll see a small hotel security hut on your left and just keep on walking along the road a little further and you’ll see a small small patch of land with a pathway which leads to the raised wooden spirit house and shrine.

The nearest BTS Skytrain station is Ploenchit. Exiting the BTS station you need to walk along Thanon Witthayu (Wirelesss Road) past the British Embassy on your left. The Swissotel Nai Lert Park Hotel* is just a little bit further up on the left-hand side. You can also arrive by water taxi using the Khlong Saen Saeb canal and getting off at Tha Witthayu but you still need to access the hotel using the same directions above.

*Update: Chao Mae Tuptim Shrine Moves Location
The Swissotel Nai Lert Hotel in Bangkok closed its doors at the end of 2016/early 2017. The land on which the hotel stood was sold to the Bangkok Hospital Group and the Chao Mae Tuptim shrine was moved to a nearby location. A smaller and tidier version of the original shrine and lingams described in this article can now be found on the grounds of the Nai Lert Park Heritage Home.