Located just to the east of Chiang Mai city, the village of Bo Sang (also written as Borsang) is famous for producing hand-made bamboo umbrellas and parasols. It’s a long-standing tradition and you only need to take a wander around Bo Sang to see how proud the community is of this heritage. 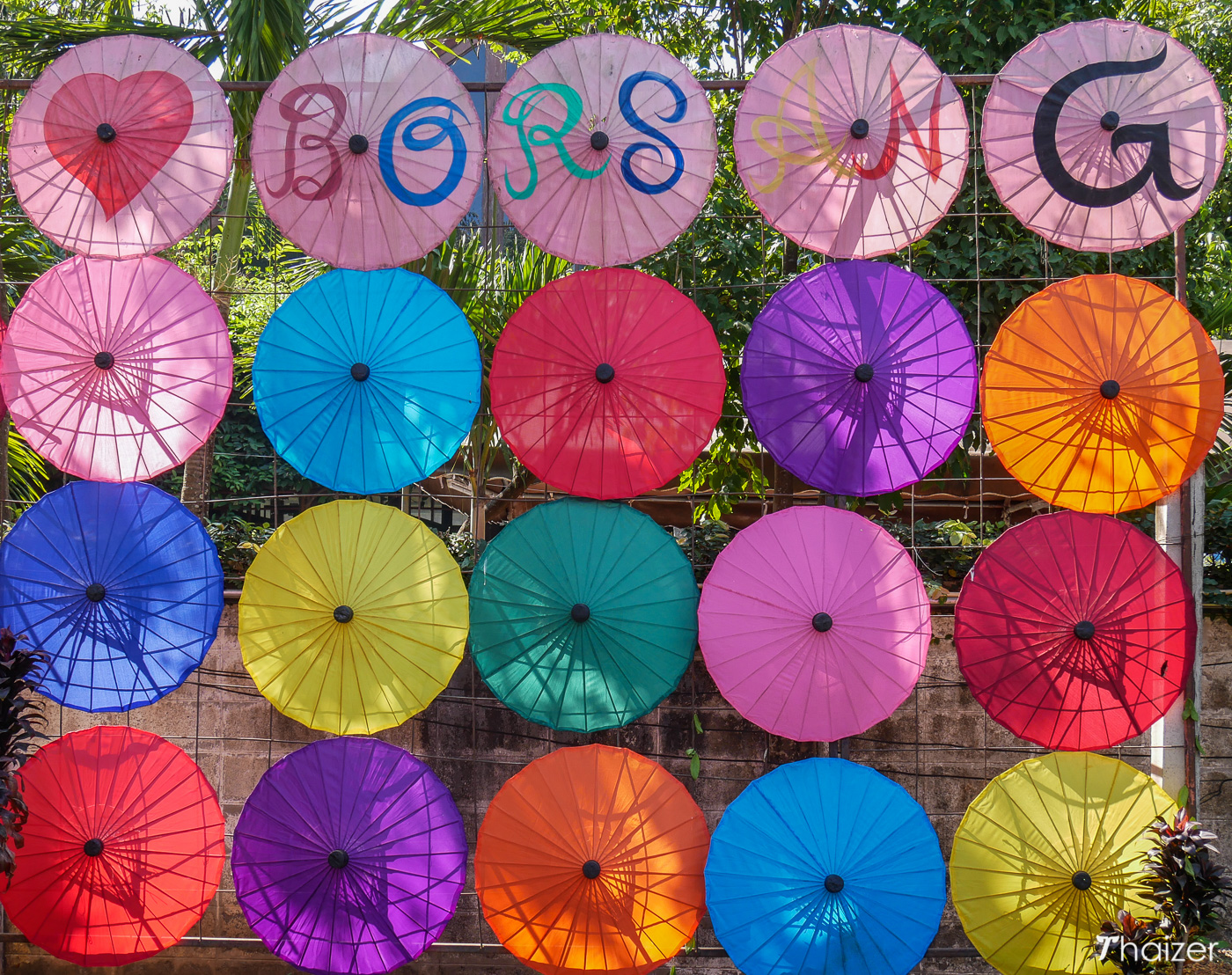 History of umbrellas in Bo Sang

According to folklore, Bo Sang owes its umbrella heritage to a local monk, ‘Phra Inthaa’. The dates are vague, but an inscription on a statue of the monk in Bo Sang says he lived ‘hundreds of years ago’. 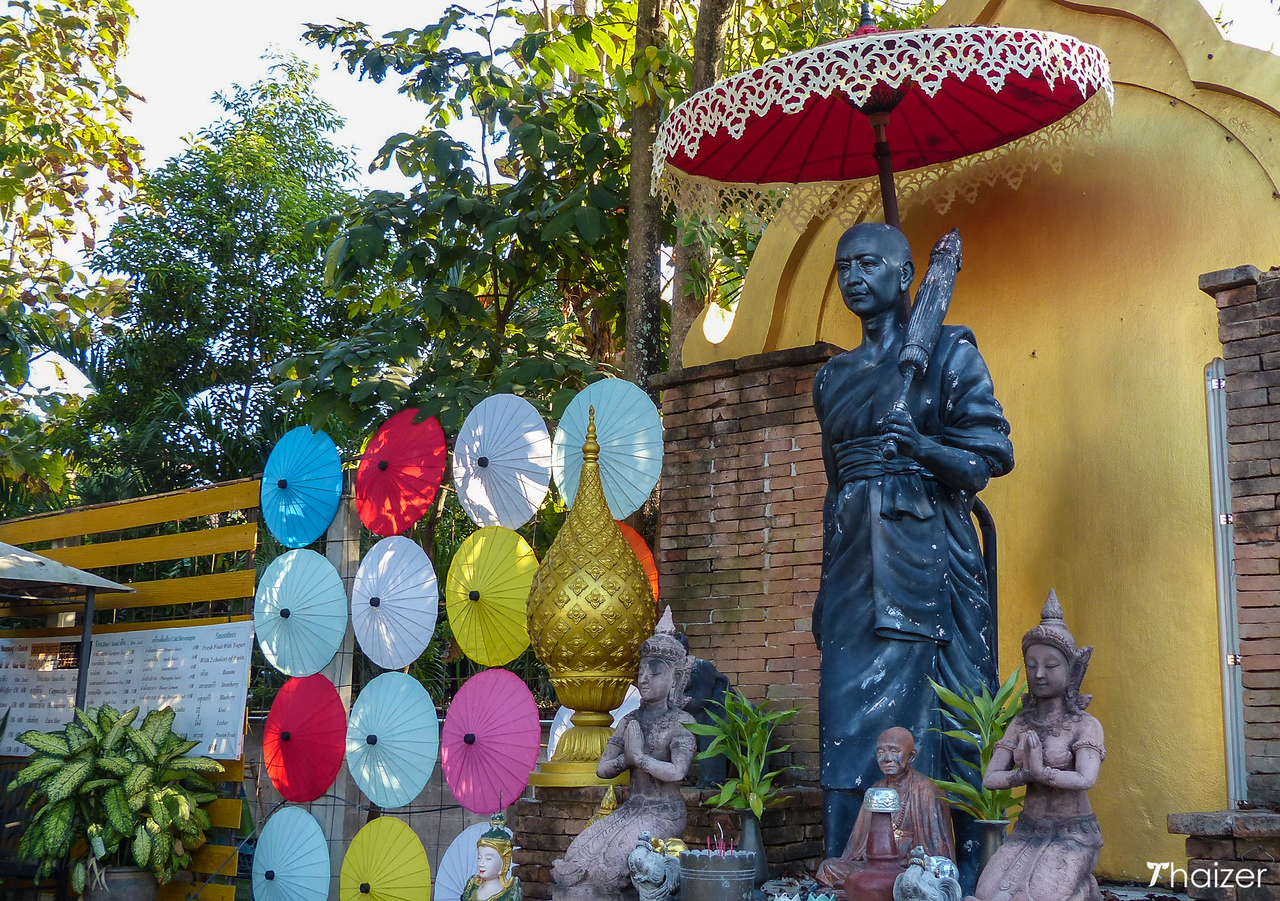 Bo Sang and the Chiang Mai area have an association with Burma that dates back to the days of the Lanna Kingdom which included large areas of north Thailand and Burma. As was common at that time, monks would embark on long journeys to other monasteries to study or to teach. On one such trip to Burma, Phra Inthaa was given a hand-made paper umbrella to protect him from the sun. The monk then visited the village where the umbrella was made and realised Bo Sang had access to the bamboo and other materials required to make the umbrellas. The holy man recognised that this could be a way for farmers in his home village to work and supplement their income during the post-harvest season. With this in mind he spent time carefully educating himself about the techniques and skills involved in making the umbrellas. 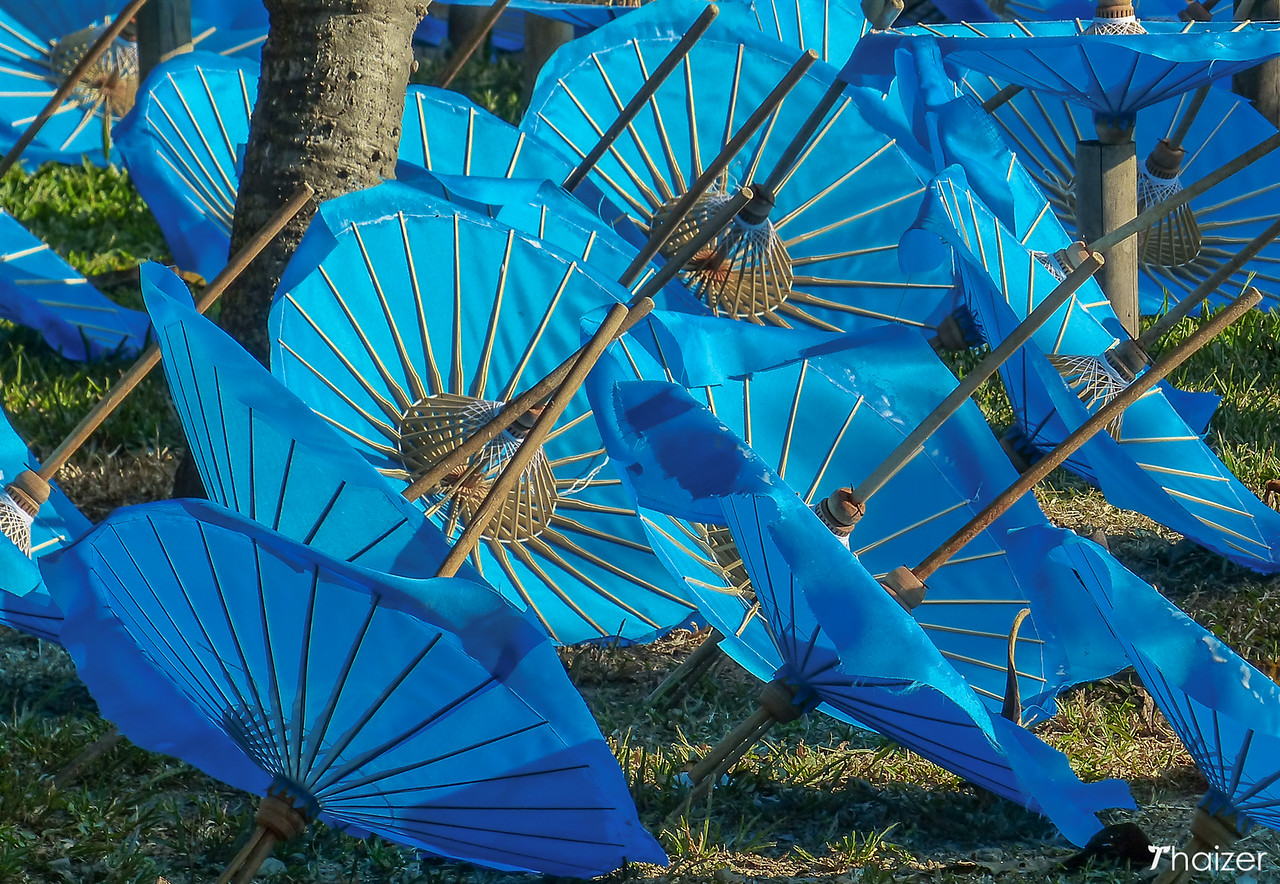 Phra Inthaa returned to Bo Sang with his new-found knowledge and passed it on to the local people. He also established what was effectively a village co-operative with different communities allocated different parts of the umbrella making process. The idea took off and the production of hand-made bamboo umbrellas in Bo Sang and surrounding villages flourished.

Initially, the umbrellas were offered to monasteries for ritual occasions. That gradually changed because the unique and practical qualities of the umbrellas made them suitable for everyday use. Today, there is a huge range of umbrellas made in Bo Sang with a wide range of sizes and designs to choose from.

On arrival in Bo Sang, head to the Umbrella Making Centre where you can watch artisans at work in the outdoor area. Informative displays and guides also help to explain each part of the umbrella making process. From the crafting of the bamboo frames to the waterproofing techniques used on the cover, it’s fascinating to see how much work and attention goes into making each individual umbrella.

The artists working at Bo Sang have also learned to diversify and not only do they hand-paint the umbrellas, they can also paint a design on your bag or mobile phone cover while you wait. Inside the umbrella making factory you can see more displays and there is also a large shop where you can buy umbrellas and parasols in a variety of sizes and a multitude of designs. The Bo Sang Umbrella Making Centre is open daily from 8.30am to 5pm.

Traditionally, the Bo Sang umbrellas are made from bamboo and sa paper which are both sourced locally with the sa paper coming from the bark of the paper mulberry tree. In addition to the traditional designs, Bo Sang now produces a range of umbrellas made from a variety of materials including canvas, cotton, rayon, and silk.

Sadly, the old skills are under threat. Although Bo Sang and Sankamphaeng are popular stop-off for tourists looking for handicrafts and local souvenirs, the number of artisans with the ability to make the umbrellas is dwindling. Making bamboo umbrellas by hand is a laborious process and the pay is low. With better paying jobs available in the city, the younger generation are less inclined to carry on the old traditions.

If you travel on a group tour you will probably only be taken to the Umbrella Making Centre. Travelling independently gives you the freedom to see more of Bo Sang and the other locations in the village where umbrellas and handicrafts are made including the Bo Sang Handicrafts Centre. The small town is a pleasant place to simply wander around and enjoy the coffee shops and little restaurants serving up local specialities like khao soi. 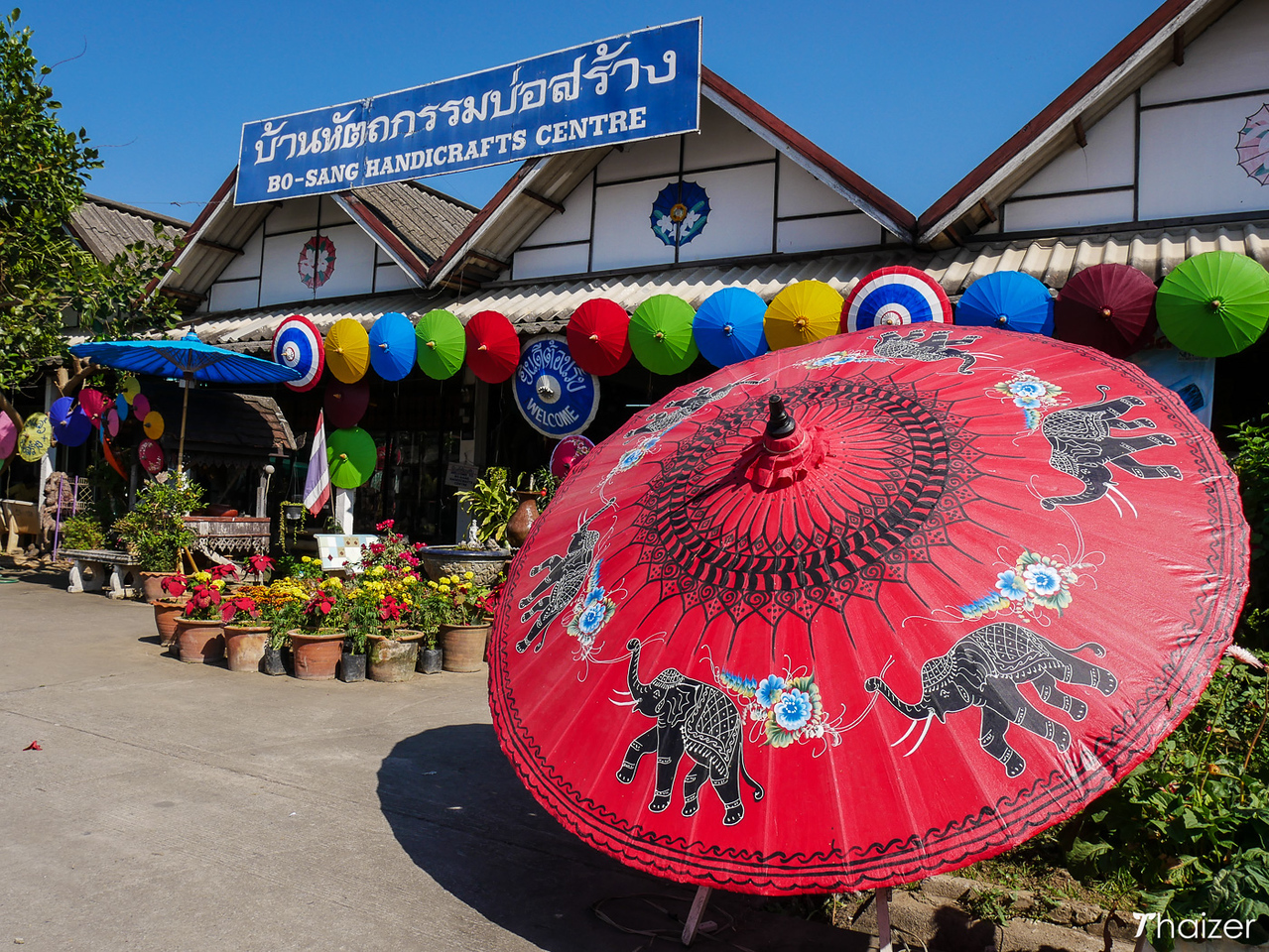 How to get to Bo Sang

Bo Sang is approximately 10km (6 miles) east of Chiang Mai city. If you are staying in Chiang Mai it’s possible to arrange an organised tour that includes Bo Sang and Sankhampaeng or you can simply hire a car and driver for the day. Both options can be arranged via tour offices in Chiang Mai.

Bo Sang can also be reached by public transport from Chiang Mai’s Waworot Market (also known locally as Kad Luang). White songthaews depart at regular intervals throughout the day from a spot adjacent to the Ping River and opposite the flower market. The journey takes approximately 30 minutes and will drop you off at the junction of Highway 1006 and 1014 which is opposite the Bo Sang Umbrella Making Centre. To take a songthaew back into Chiang Mai, flag one down across the road from where you are dropped off. The fare is/was 15 Baht each way. If you carry on a little further, you can also visit the excellent Maiiam Contemporary Art Museum.