Buddha Images for Each Day of the Week

When you visit temples in Thailand, you may notice a line of Buddha images in different poses. Each image reflects specific events in the life of Buddha which occurred on different days of the week. In Thailand, the day of the week on which you are born is considered important and so Thai Buddhists may leave a donation at the image which represents their birthday as a way of making merit and wishing for good luck. Note that there can be up to ten images on display because some days are associated with more than one image. Below is a guide to the images for each day of the week. 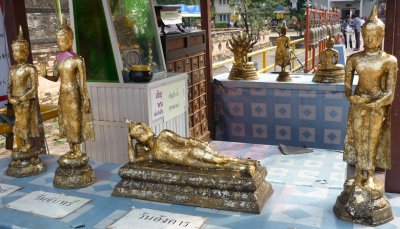 In Thailand, the first day of the week is considered to be Sunday and the photo above shows the Buddha images (from left to right) for Sunday to Wednesday.

The image for Sunday shows the Buddha in pensive thought with the hands held together at waist level, right hand over left.

The image for Tuesday is the reclining Buddha and represents the Buddha entering Nirvana.

The image for Wednesday (day) shows the Buddha stood up holding an alms bowl.

The photo below shows the Buddha representations (from left to right) for Wednesday night to Saturday. 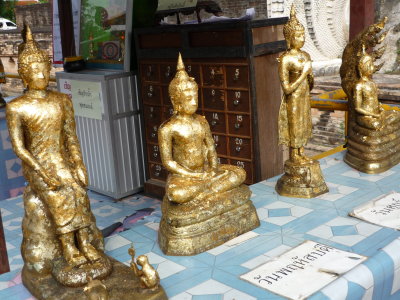 The image for Wednesday night relates to the time when the Buddha retreated to the forest to meditate. The animals in the forest offered the Buddha food and drink and this image usually shows the seated Buddha being attended by a monkey and an elephant. The monkey is often depicted holding a honeycomb whilst the elephant may be shown carrying a bowl of fruit or water.

The image of the meditating Buddha represents Thursday with the Buddha sat cross-legged and with hands rested, left hand in front of right.

A standing image shows the Buddha contemplating or deep in thought with arms folded at chest level, right hand in front of left.

Saturday’s image depicts the Buddha sitting cross-legged in meditation with a serpent behind him. This represents the story of the Buddha being protected from a storm by the King of Nagas who used his cobra’s hood to shield the Buddha.

Find out which colour is associated with your birthday »