Christmas isn’t an official public holiday in Thailand with only a small minority of the Thai population being Christian. However, T.I.T. (This Is Thailand) and so at this time of year hotel staff can be seen wearing Christmas hats whilst shopping centres and malls get decked out with decorations. Christmas trees appear amongst the palm trees and Thai schoolchildren practising their English can be heard singing ‘Jingle Bells‘. So what are the reasons behind this seemingly strange conflict of culture between East and West? 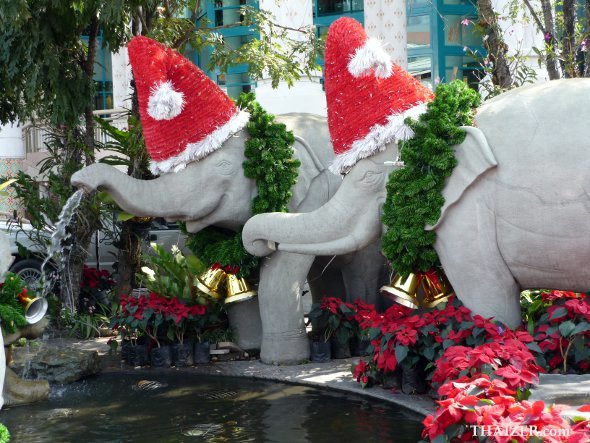 Over 90% of the Thai population are Buddhist. Buddhism is tolerant of all other religions, including Christianity, and this religious tolerance is part of the reason why a major Christian festival such as Christmas can also be enjoyed by Buddhists in Thailand.

The concept of sanuk and enjoyment is a fundamental part of Thai culture. Thai people like to party and so any excuse for a celebration is gleefully seized upon. The religious meaning of Christmas might not be important to most Thai people, but they know it’s a time when other countries are celebrating and they are happy to join in with the party.

Tourism is a major contributor to the Thai economy with the peak Christmas and New Year period usually being the most lucrative time of the year for the Thai tourist industry. Hotels and resorts ensure that those on holiday or vacation in Thailand don’t miss out on the Christmas festivities with gala dinners and special events being laid on. Staff in bars and restaurants can be seen wearing red and white Christmas hats whilst enterprising street and beach vendors will try and sell you festive novelties. Because it’s all done with a uniquely Thai style it’s sanuk mak ma. 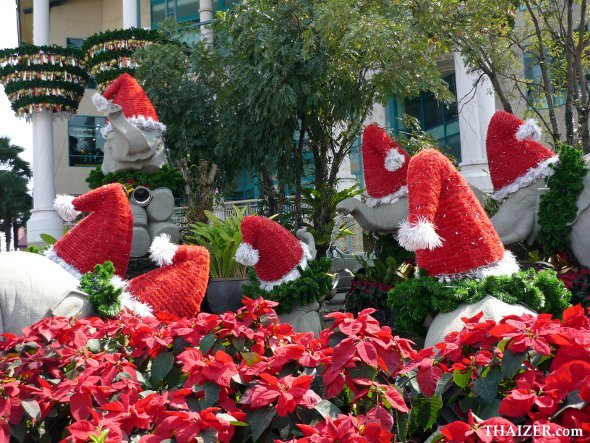 Although all of the above reasons help to explain the presence of Christmas festivities in Thailand there is also the obvious commercial aspect. Thailand remains distinctly Thai, but has embraced many aspects of Western culture and Thai retailers and advertisers have been quick to exploit Christmas as a marketing tool.

Just to give readers a sample of what has been happening in recent days in Thailand in the run up to Christmas. In Ayutthaya, elephants have been dressed up in Santa Claus costumes before being taken to local schools and distributing presents with their trunks. At the Sri Racha tiger zoo just outside of Pattaya, some of the tigers have also been wearing Santa hats. I took these photos of the elephant statues outside a shopping centre in Chiang Mai and I’ve also seen dogs in the front baskets of motorbikes dressed in Santa costumes. Thai television has also shown footage of the panda cub at Chiang Mai zoo wearing a specially made Christmas costume. Whilst the dressing up of live animals might not be seen as politically correct in the West, it’s par for the course in Thailand where it’s seen as narak. What is also narak is the difficulty some Thai people have saying the word Christmas (an observation and not a criticism because my use of Thai is far from perfect at the moment). So I’ll leave the last word with my friend Khun Kai who wanted me to know that she wished me and all of my family a ‘happy melly kissmas‘. 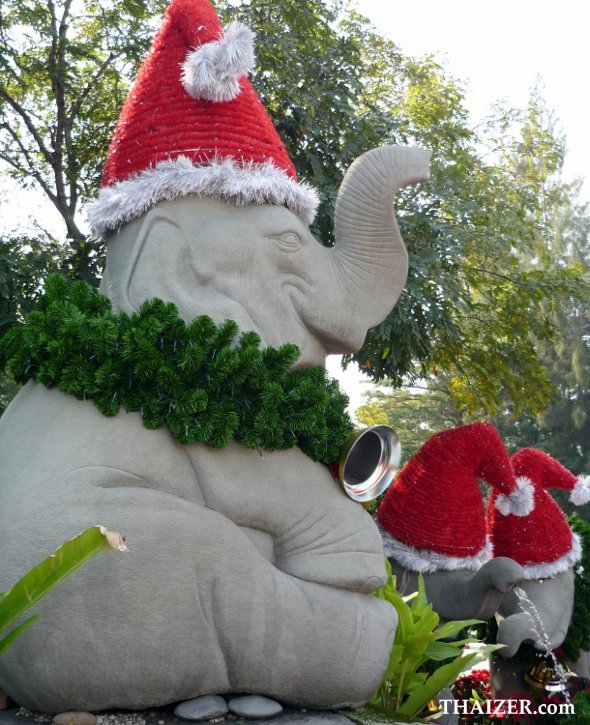