If you are travelling in Thailand for any length of time you may see a money tree at some stage during your journey. These can often be seen in temples after they’ve been donated, but whilst the trees are still ‘growing’ I’ve also seen them in restaurants, markets and bars. They are usually set up by communities or groups for a specific purpose such as contributing towards repair work at a local temple. Donating to a money tree is one way of making merit (thambun) which plays a fundamental part in Buddhist culture in Thailand. Once the tree is full, a procession usually takes place accompanied by music and festivity as the money tree is donated along with other individual contributions and goods. I took the photos below at a recent ceremony in Chiang Mai where the money and food being donated was going to the flood victims in Thailand. 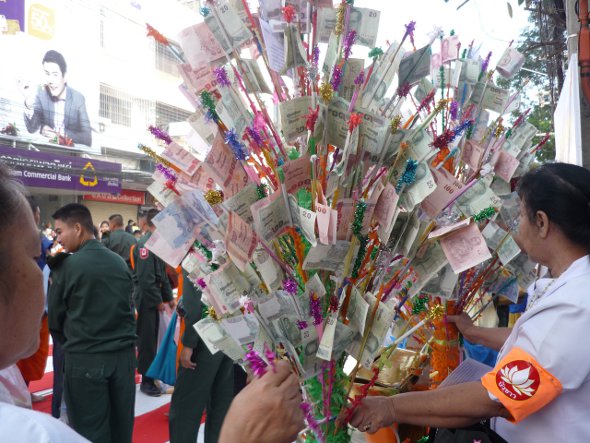 Any denomination note can be donated with 20, 50, 100 and 1,000 Baht notes used to form a colourful display. The notes are placed on split bamboo holders and coloured cloth or ribbon may also be tied to the stick. Although the money tree is a relatively modern introduction, the symbolism behind it has its roots in ancient traditions. Hundreds of years ago, Buddhist monks in Thailand used abandoned pieces of cloth to make their robes because they were unable to receive robes directly from lay people. To make things easier for the monks who lived in the forest, the people in the countryside would deliberately leave good cloth attached to trees and bushes. This cloth would then be sewn together and dyed by the monks. In modern-day Thailand robes can now be donated to monks, but the coloured attachments to the money tree are symbolic of former times. 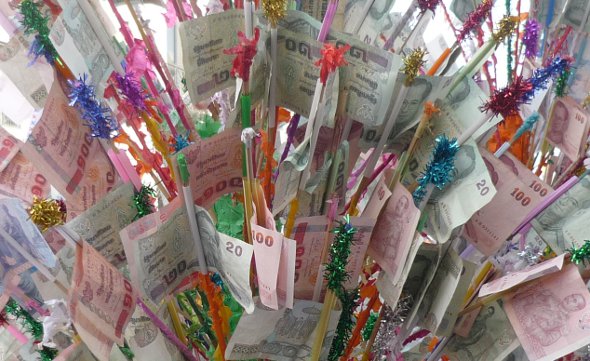