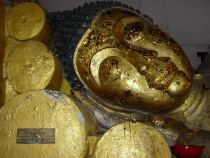 Wherever you go in Thailand you will see Buddha images and it doesn’t matter how small, old or what state of disrepair it may be in, the image is still sacred. Standing on an old Buddha statue to have your photograph taken is one of the most disrespectful things that you can do in Thailand because you are placing the lowest (the feet) upon the highest (Buddha). That’s not to say that you can’t photograph Buddha images because you can, but you have to display some respect and courtesy. As photogenic as some of the giant Buddha images are, don’t let your children or anybody else climb onto them.

The images of Buddha serve as a prompt or an aid to remind people of the teachings of Buddha. The images themselves are not religious idols and don’t represent any god. When a Thai person wais or kneels in front of a Buddha image it isn’t an act of worship as such, it’s more an act of respect for the Buddha and his teachings.

For all this talk of respect, it should be pointed out that there have been a number of cases of Thai thieves stealing Buddha images for monetary gain. This is of course seen as almost the lowest of the low, but most Thai Buddhists will take the attitude that the thieves will get the punishment they deserve in the next life.

It is possible to buy Buddha images in Thailand, but strictly speaking it is illegal to take them out of the country unless you have the proper legal paperwork. Many retailers won’t advise you of this, but in reality if it isn’t an antique and it is small enough to go into your hand baggage it shouldn’t be a problem. Nevertheless, please be aware of the law and if you do have a Buddha image at home, it is respectful to position it in a raised position (i.e. not on the floor).