You are here: Home / Buddhism / The Rabbit on the Moon 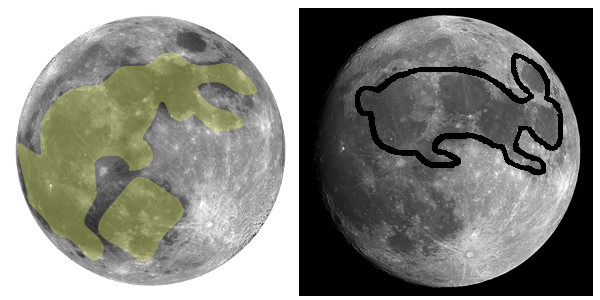 The ‘Moon Rabbit’ also appears in the folklore of a number of Asian countries including Japan and China, but it’s possible that the Thai stories may have originated from the Buddhist Jataka Tales, stories about the previous lives of the Buddha in both human and animal form.

The Old Man and the Rabbit

One of the fables tells the story of four animals: a jackal, a monkey, an otter and a rabbit. The animals had decided to show charity on the day of the full moon in the belief that with great charity would come great merit. On that day, the animals came across an old man begging for food. The monkey collected fruit and the otter brought fish whilst the jackal found a lizard and a pot of milk-curd. The rabbit only knew how to collect grass and knowing this would not be a meal, offered his own body instead by jumping on the fire that the old man had prepared. But the rabbit was not burnt or killed. The old man revealed himself as Shakra (the lord of gods in Buddhist cosmology). Moved by the virtue of the rabbit, Shakra drew the likeness of the creature on the moon for everybody to see. The swirl around the image is said to be the smoke that rose when the rabbit threw itself onto the fire.