Erected to commemorate the 1932 coup which brought about the end of the absolute monarchy in Siam, the Democracy Monument (Anusawari Prachathipatai) certainly isn’t one of Bangkok’s more attractive landmarks. It is, however, one of the most symbolic and has witnessed some of Thailand’s darkest days since it was commissioned in the 1930s. The monument represents the rights and freedoms of the Thai people and has proven to be a natural rallying point during various political protests over the years. Sadly, a number of these demonstrations have had fatal consequences giving the monument and location around it added poignancy. 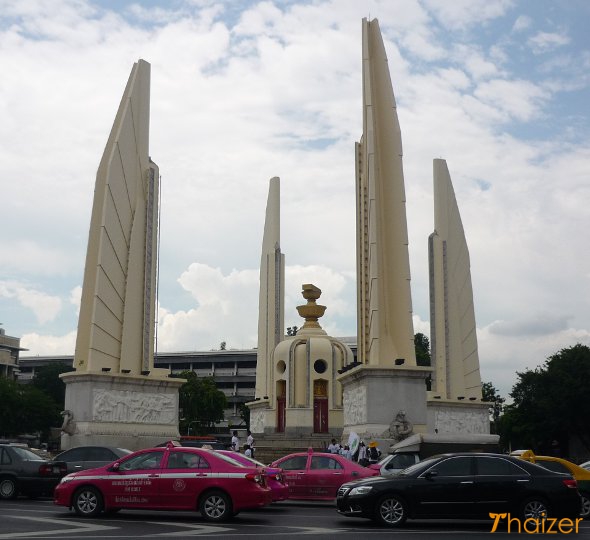 Like many buildings and structures in Thailand, the Democracy Monument is loaded with symbolism and the location and dimensions were a product of careful consideration. The four wings of the monument represent the four branches of the Thai armed forces which carried out the coup: air force, army, navy and police. The centre-piece of the structure is a mound on which sits two golden-coloured offering bowls with a representation of a manuscript box which holds the 1932 Thai constitution. The radius of the base is 24 metres and the four wings are also 24 metres high to represent the day on which the Siamese Revolution took place, June 24. The central mound or turret is 3 metres high representing the third month of the traditional Thai calendar (June). There are also carvings of protective nagas around the base of the monument. 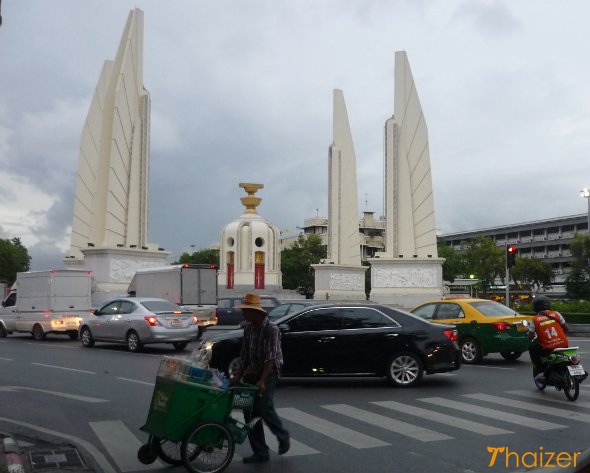 In recent history Bangkok’s Democracy Monument has been the scene of numerous protests. Some have been peaceful, but sadly there have been dozens killed in the vicinity of the monument as protesters and Thai security forces have clashed.

October 1973
Student demonstrations which began at nearby Thammasat University in October 1973 spread to Ratchadamnoen Klang and the Democracy Monument as protesters demanded a new constitution. A brutal crackdown on the protest resulted in dozens of students being killed. An iconic photo from those events shows the body of one of the students being hoisted on top of the central mound of the Democracy Monument by fellow protesters.

October 1976
Three years after the 1973 bloodshed, an army general who had been partly responsible for the crackdown was allowed to return to Thailand as a Buddhist monk. His return provoked outrage and drew students and protesters to the streets once more. The Democracy Monument and Thammasat University area featured again as a scene of gatherings and clashes with dozens of protesters losing their lives.

May 1992
‘Black May’ saw hundreds of thousands of Thai people take to the streets around Sanam Luang and the Democracy Monument in protest against General Suchinda who had become premier of Thailand following a bloodless military coup in 1991. At least 52 people died during the army crackdown although many Thai people today believe the true death toll to be much higher.

April 2010
Fatal clashes took place between between anti-government red-shirt protesters and Thai security forces on Ratchadamnoen Road and around the Democracy Monument. Red shirt supporters would later lay dozens of symbolic red coffins on the steps of the Democracy Monument to represent those who had died.
Remembering Thailand’s troubled past

The Democracy Monument is located on a roundabout (traffic circle) on the wide avenue known as Ratchadamnoen Klang almost equidistant between the Golden Mount (Wat Saket) to the east and Sanam Luang to the west. Dinso Road leads to Wat Suthat and the Giant Swing to the south.

Previous Post:Friends Holding Hands
Next Post:Don’t Stand on the Threshold