One of the largest open-air art exhibitions in the world touches down in Bangkok on December 1. A collection of 88 hand-painted elephant statues go on display in the Thai capital and at 1.5 metres high, the jumbo-sized Elephant Parade herd is set to make a big impression in Bangkok.

Since its inception in 2007, Elephant Parade has created around 1,000 life-sized decorated elephant statues. Painted by Thai and international artists, the unique art display has brought colour and smiles to various cities around the world. This is the first time the Elephant Parade has exhibited in Bangkok and with Thailand being the spiritual home of Elephant Parade it’s set to be a massive event for everybody concerned. The elephants will be on display in the Thai capital throughout December and January.

It is the mission of Elephant Parade to become the world’s largest support organisation for the Asian elephant, threatened with extinction. The open air art exhibitions create worldwide attention, public awareness and support for the cause of elephant conservation: the elephant statues never go unnoticed by the wider public and mass media.
– Elephant Parade

The founders of Elephant Parade

Father and son team Mike and Marc Spits are the founders of Elephant Parade. The idea for the social enterprise came after a visit to an elephant hospital in northern Thailand where they witnessed first hand the work involved in treating sick and injured elephants. And it was one of those injured elephants, a youngster called Mosha, who was to become the inspiration and mascot for Elephant Parade.

Mosha was still a baby when she was first treated at the Friends of the Asian Elephant Hospital in Lampang. The youngster had lost her front right leg after standing on one of the landmines that still litter remoter parts of Cambodia and the Thai-Cambodia border area. When Mosha first arrived at the hospital, veterinarians thought her chances of survival were slim. The baby elephant would not eat and shunned the company of other elephants. But a pioneering treatment in 2007 changed Mosha’s life when she became the first elephant in the world to receive a prosthetic limb. Mosha’s new limb proved to be a great success, but her continuing growth means that she has to have a new leg fitted every year and must then learn to walk all over again. A statue of Mosha wearing her prosthetic leg is always featured at every Elephant Parade event.

Established in 2006, the Golden Triangle Asian Elephant Foundation (GTAEF) works to improve the plight of Thailand’s elephants. They also co-operate with the Thai government and other organisations in a number of welfare projects. These include programmes to rescue elephants from city streets and to help mahouts and their families. GTAEF have also supported research and clinics and has helped to set up an elephant hospital in Krabi and provided a specially designed elephant ambulance for the Thai Elephant Conservation Centre (TECC) in Lampang.

In February 2016, a selection of elephants from the Bangkok Elephant Parade will be auctioned off at a charity gala dinner at Anantara Siam Bangkok hotel. The proceeds will go to GTAEF who in turn will select a range of sustainable programmes that benefit the elephants of Thailand.

Where to see Bangkok Elephant Parade 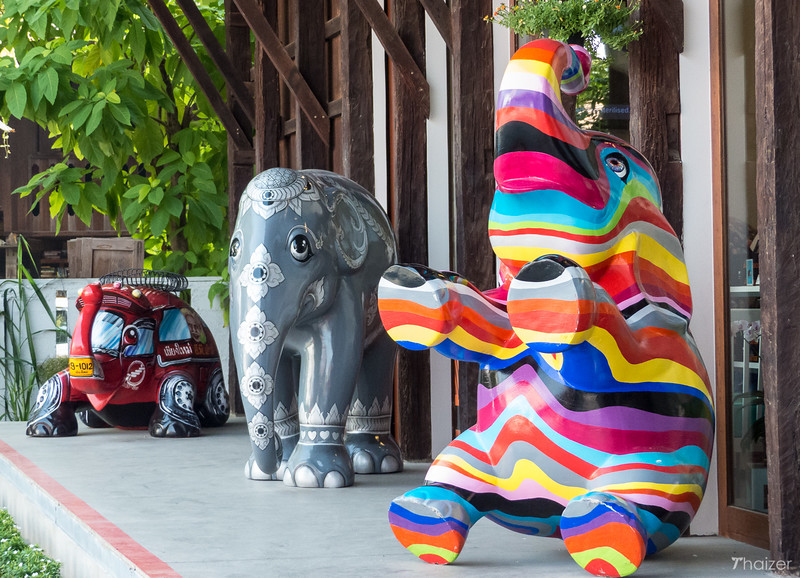