One of the most important figures in Thai history, King Ramkhamhaeng (Rama the Bold) ruled the ancient Sukhothai kingdom from 1278-1298. Regarded as a benevolent and wise ruler, one of his major achievements was the compilation of a system of writing and a new Thai alphabet which he adapted from the various forms of Khmer script that were previously used. The alphabet King Ramkhamhaeng the Great devised in 1283 is essentially the same as that which is used today in Thailand and he is sometimes referred to as the ‘Father of the Thai language’. He has also been credited as the most important figure in establishing Theravada Buddhism in Thailand although the extent of his role is disputed by some historians. 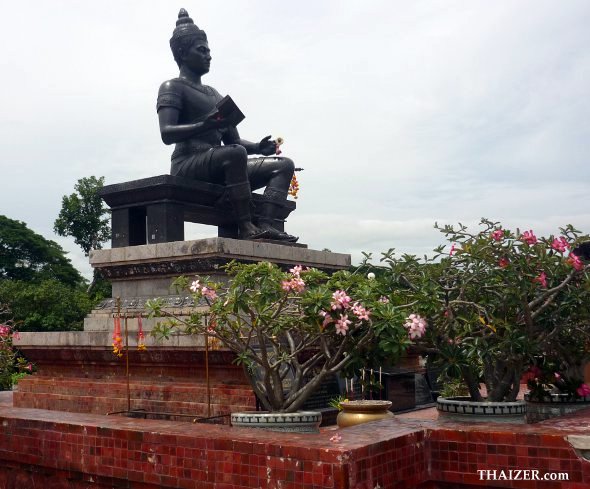 As the third ruler of Sukhothai, the kingdom was already well established when Ramkhamhaeng came to the throne. Mainly using diplomacy rather than war, he skilfully expanded the kingdom. The rulers of other kingdoms to the north, south, east and west of Sukhothai either succumbed to Ramkhamhaeng or forged alliances with him. The prosperous and mainly peaceful time was marked by rapid cultural and political growth. Following the death of King Ramkhamhaeng the decline of Sukhothai was just as rapid and by 1320 the once-mighty Kingdom of Sukhothai was a shadow of its former self.

Once the new writing system was developed the king ordered stone tablets to be inscribed which told the story of the Kingdom of Sukhothai. With the eventual fall of Sukhothai these tablets remained undiscovered until January 17, 1833. January 17 is now marked as King Ramkhamhaeng Day in Thailand although it is not a national public holiday in the same way as King Chulalongkorn Day. The name Sukhothai translates as ‘Dawn of Happiness‘ and one of the most famous quotes from the stone inscription tells of a prosperous and free land:

“In the time of King Ramkhamhaeng this land of Sukhothai is thriving. In the water there are fish, in the field there is rice. The ruler does not levy a tax on the people who travel along the road together, leading their oxen on the way to trade and riding their horses on the way to sell. Whoever wants to trade in horses, so trades. Whoever wants to trade in silver and gold, so trades . . .”

The Bell of King Ramkhamhaeng

King Ramkhamhaeng instructed that a bell be hung from one of the gates to Sukhothai. Any commoner with a grievance was free to ring the bell. The king himself would speak to the man and after examining all of the issues the king would make a balanced judgement.

Statues of the King

Statues of King Ramkhamhaeng will often show him holding the stone tablet and because of his association with education, students and teachers alike may pay their respects. The most famous statue of King Ramkhamhaeng the Great is located inside the central zone of Sukhothai Historical Park (pictured). As you approach the statue there is a pond in front and a replica bell to the left which visitors are encouraged to ring in order to receive a blessing. He also features in Chiang Mai’s Three Kings Monument (as you look from the front he is the figure on the right).