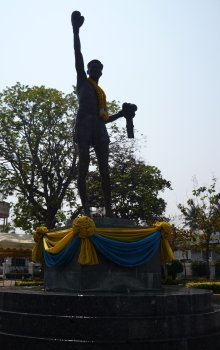 Thailand is renowned for Muay Thai or Thai boxing, but over the years Thailand has also produced a number of world champions in the orthodox form of boxing. Thailand’s first boxer to win a world title belt was Pone Kingpetch who became flyweight champion of the world on April 16, 1960 when he defeated Argentinian legend Pascual Perez at Lumpini Stadium in Bangkok.

Born in Hua Hin in 1935, Pone’s real name was Mana Seedookbuab but he fought under the ring-name of Pone Kingpetch (also written as Kingpeth) and achieved cult status in Thailand when he won the world title. He went on to become three-time world champion before retiring from the ring in 1966. Along with Khaosai Galaxy and Chartchai Chionoi, boxing purists rank Pone as one of the three best boxers Thailand has ever produced. Pone died in 1982 at the age of 47, but his memory has not been forgotten. In his hometown of Hua Hin, there is a statue and a park in his memory. Local people still place garlands of flowers at the statue (pictured) which is located on Thanon Damnoern Kasem, the road that leads from Hua Hin train station to the beach. Heading out of the train station, the statue is on the right-hand side opposite the fire station.