One thing that often strikes first time visitors to Thailand is the number of royal portraits on show. Arriving at Bangkok airport you will see signs and images proclaiming ‘Long Live the King’ in Thai and English. Major streets and thoroughfares in towns and cities throughout the country also display the Thai national flag alongside portraits of the Thai King and Queen. Thai royalty also have their own individual flags with their particular royal insignia and this flag is often flown or displayed alongside the image. For instance, the king’s flag is yellow (because he was born on a Monday) whereas Queen Sitikit’s flag is blue (she was born on a Friday) and Princess Maha Chakri Sirindhorn has a purple flag (Saturday). The photo below shows a roadside billboard with the king and queen with the individual royal flags shown on either side. Just about every home, office and public building in Thailand displays a royal portrait and although in many cases that is a photo or painting of HM King Bhumibol Adulyadej (Rama IX), the portraits aren’t just about paying homage to the present king. 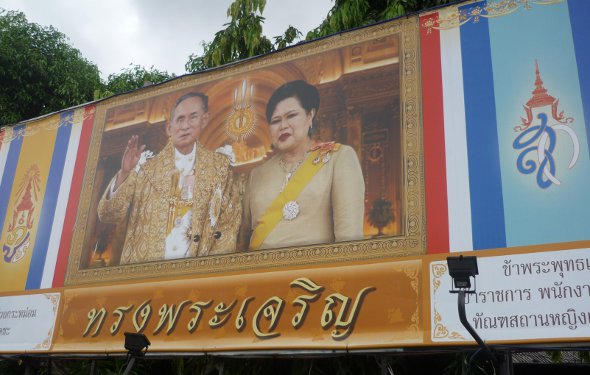 In Thai homes and shops, royal portraits are associated with good fortune and if you look behind the counter of shops and restaurants in Thailand you are likely to see at least one depiction of Thai royalty. Sepia coloured images of previous kings such as King Mongkut (Rama IV) and King Chulalongkorn (Rama V) are particularly popular. These two monarchs played key roles in the protection, development and modernisation of Thailand and portraits of these two kings are often given as house-warming presents or when somebody opens a new shop or business venture. Another very popular figure is the late Princess Mother (mother of the present king) who is still affectionately referred to as Mae Fah Luang (Royal Mother From the Sky).

Aside from the formal images of the present king, there are also less less formal pictures which can be seen on items including calendars. Popular photos include the iconic images of the king with his favourite dog Tong Daeng and others showing the Thai monarch with his trusty camera or holding a map as he presides over the royal projects which he has established to improve the lives of ordinary Thai people.