You are here: Home / Features / Shrine to Prince of Chumphon (Sadej Tia)

He may not be well-known to people outside of Thailand, but Admiral HRH Prince of Chumphon (also written as ‘Jumborn‘) is the man who is referred to as the ‘Father of the Royal Thai Navy’. The prince has a fascinating story that involves military prowess, medical skills and magical powers and his enduring legacy means that he is still widely revered amongst Thai people today. 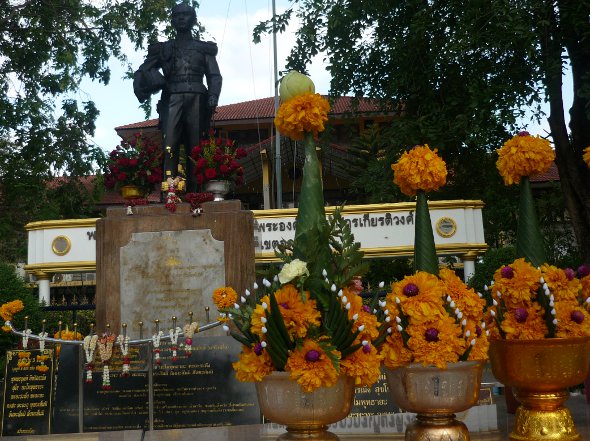 Born in 1880 (his father was King Rama V) his formal title was Prince Abhakara Kiartiwongsehe. The young prince studied as a naval cadet in England and when he returned home he served with distinction in the Royal Siamese Navy and was instrumental in the modernization of the fleet and the naval service in general. Away from his navy duties, the prince also studied medicine and had a particular interest in herbal medicine. Treating patients from all walks of life, the prince was known as ‘Doctor Phon’. With a reputation for compassion, he was also believed to possess supernatural powers. Although he died in 1923 those who believe in the powers of Sadej Tia (the ‘Royal Father’) say his spirit is still around. Some people, especially those involved with the navy or those who work at sea, will carry amulets of the prince which they believe will protect them.

There are thought to be more than 200 statues of the prince at various locations throughout Thailand and members of the Thai navy, fishermen and other Thai citizens make offerings at his statue and pray. The photos here are from my recent visit to the statue and shrine to Sadej Tia which is located in front of Rajamankla University of Technology Phra Nakorn on Phitsanulok Road in Bangkok. This is the site of the former Nang Lern Palace where the prince resided. One popular way to make an offering is for Thai people bring sets of nine red roses and nine incense sticks in the belief that Sadej Tia will listen to prayers and help fulfil wishes. You will also notice in the photo below the anchor covered in garlands and the mini naval personnel standing guard. 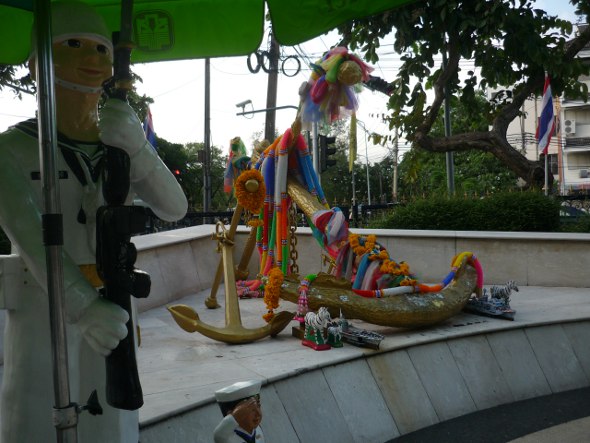 Statues of Sadej Tia can also be found in Chumphon province and if you visit Pattaya there is a statue of Sadej Tia at the naval station close to the viewpoint on Pratumnak Hill. Another famous statue of the prince is located at another viewpoint, this time in Phuket. The Phuket statue of the prince is near the lighthouse at Laem Promthep (Promthep Cape) at the southern tip of the island.