Takraw is one of the most popular sports in Thailand. There are a number of different versions of the game, but the main aim is to score points against your opponents by keeping the ball off the ground using any part of your body except for your hands. Played throughout South East Asia the sport is generally known as sepak takraw, but in Thailand it’s just called takraw. The ball used is light, hollow and made of rattan and you will often see these balls for sale as souvenirs in resort and tourist areas. If you are visiting Thailand keep your eye out for a game because you don’t need to know the rules to admire the skill and dexterity involved. Takraw games can often be seen within the grounds of temples as well as parks, schools and patches of waste ground. 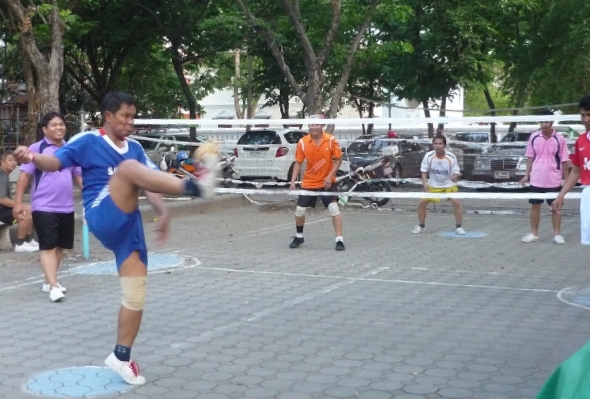 This version of takraw has been called kick volleyball and is played on a badminton or volleyball court with a five foot high net. The two teams of three line up on opposing sides of the net and have three chances to get the ball over the net without using their hands. Players can kick, knee, head or shoulder the rattan ball. The movement and flexibility of players can be spectacular with overhead kicks and bicycle kicks employed to win points. To serve, one player throws the ball high in the air to his team-mate who has to volley it over the net using his foot.

This form of the game is played around a hooped net suspended high above the ground and can often be seen being played on basketball courts. The two opposing teams are given an allocated amount of time in which they must work as a team to score as many points as they can to defeat their opponents.

There are a number of other types of takraw which place emphasis on individual skill. Similar to scoring in gymnastics, more points can be awarded to players according to the difficulty level of a particular move. In another form of the game, players have to have their arms behind their backs and can only back-heel the ball into the net.