Thai boxing, known as Muay Thai (muay=boxing) is Thailand’s national sport. Although football (soccer) is universally popular throughout Thailand, Muay Thai still remains as the national sport. Even if you are not interested in boxing, a visit to a genuine Muay Thai bout can still be a fascinating experience because Thai boxing isn’t just about fighting, it’s also about ritual, ceremony and respect. 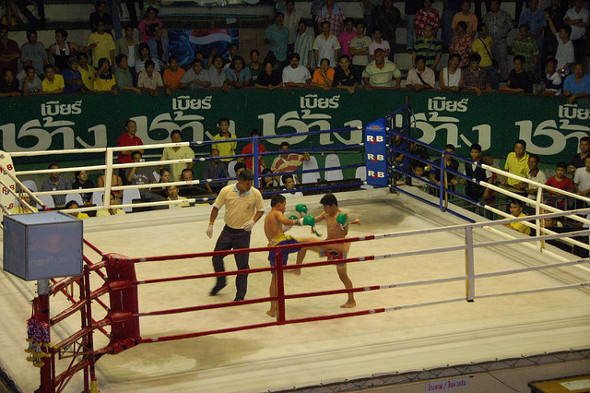 It’s widely believed that the modern form of Muay Thai traces its roots back to a form of unarmed combat performed by Siamese soldiers known as Muay Boran (muay= boxing, boran=ancient). Over the years some of the more brutal elements have been removed and more rules introduced to form today’s officially regulated sport of Muay Thai. For the modern Muay Thai boxer, gloves are mandatory and head-butts are no longer a legitimate tactic. However, much of the tradition from ancient times still remains intact, particularly in the pre-fight ceremonies and the adornments each fighter wears when entering the ring.

Before the bout, each boxer (nak muay) enters the ring accompanied by the wailing strains of traditional Muay Thai music; a combination of woodwind and percussion which continues during the fight. The boxers will wear a number of items all of which are aimed at preventing them from coming to any serious harm. The origins of these traditional adornments can be traced back to the ancient Siamese warriors and the earlier exponents of Muay Boran. Siamese soldiers would often have spiritual tattoos (Sak Yant) or wear good luck charms blessed by monks which were believed to protect them in battle. The modern day Muay Thai fighter enters the ring wearing garlands of flowers around his neck, cotton armbands known as prajiad around the biceps and a sacred cotton headband, known as mongkhon. Before the action begins, the garlands and mongkhon are removed by the boxer’s teacher (trainer); it is bad luck for a fighter to remove the mongkhon himself.

Most Thai people believe in the presence of spirits and there are a host of everyday activities which involve bringing about good luck and preventing something bad happening so it’s not surprising that this extends into the boxing ring. After entering the ring each fighter performs a number of bows. The first is in the direction of the fighter’s birthplace. The boxer will then bow to the north, south, east and west honouring his teachers, past and present, as well as the spirit who is believed to reside in the ring. As the fighter circles the ring in his pre-fight routine and prays to each corner he may touch the rope to symbolically seal the ring and prevent evil spirits from entering.

When a novice fighter is accepted by a teacher it is done so with certain obligations. The trainee boxer must be diligent, respectful and follow his teacher’s rules no matter how harsh they seem. This respect is carried through into the ring and demonstrated before every fight with the wai khru ritual in which the fighter pays homage to his teachers, past and present. It is actually a stipulation of Muay Thai rules that each fighter must perform wai khru ram muay (wai = pay respect; khru=teacher; ram=dance; muay=boxing). There is no set way of performing wai khru ram muay and each fighter will have their own individual interpretation stemming form their teacher or trainer. The movements are normally slow and deliberate and help to act as a final limbering up exercise before the action begins.
There is an excellent article here which details the build up to a Muay Thai fight >> (see the section in the right menu which says fighting and the link titled ‘Story: Fight Night’

In Thai boxing, any part of the body, except for the head, can be used to attack an opponent. The target area is any part of the body, except for the groin. Fighters wear boxing gloves, but it is often kicks or elbows to the head which result in knock-outs. Bouts normally consist of 5 rounds. Each round lasts 3 minutes with a 2 minute rest between each round, although amateur bouts may be shorter in duration. In the event of no knock-out, the referee and judges score the contest. In Muay Thai, the boxers will fight from either a red or blue corner and betting on the outcome of a fight is an integral part of the Thai boxing experience. Although most forms of betting are illegal in Thailand, it is permitted in certain Thai boxing stadiums including Lumpini and Rajadamnern in Bangkok.

Where to Watch a Muay Thai Fight

Just about every town and city in Thailand has a venue for Muay Thai. In tourist areas there are usually additional venues geared towards overseas visitors. One example which springs to mind is the Thai boxing on show at Walking Street in Pattaya which attracts coach loads of Korean and Japanese tourists. However, Pattaya also has an authentic Muay Thai stadium close to Second Road. Wherever you are staying in Thailand, if you are interested in watching a genuine fight ask at your hotel or guest house and stress that you want to see the real deal and not a display staged for tourists. Some amateur bouts are staged at local festivals and temple fairs and are free to watch. Arguably the best place in Thailand to watch Muay Thai is in Bangkok. Thailand’s top fighters normally perform at the Lumpini and Rajadamnern Stadiums in the Thai capital. As a foreigner, it is often assumed you want ringside seats even if you don’t. If you go as part of a group tour you will normally pay more and will usually be seated close to the action. Unless it’s a major championship fight, tickets can be bought on the door with the under-card bouts starting early evening around 6.30 pm.