Sweden has a special connection with Thailand and it’s a connection that dates back to 1897 when King Chulalongkorn (Rama V) of Siam visited Scandinavia as part of a royal tour of Europe. As a result of that historic trip, a small town in rural Sweden is the unlikely, but beautiful setting for a Thai pavilion and road named in honour of the former Thai monarch. 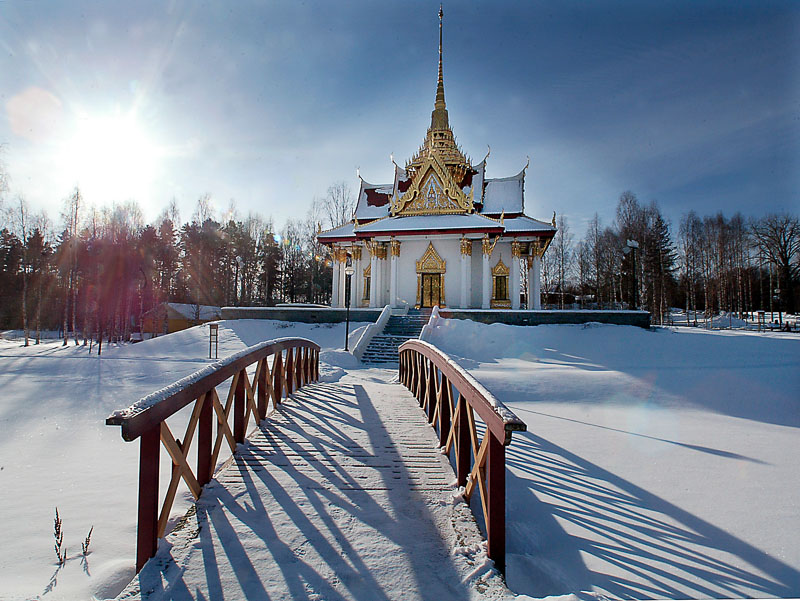 In 1897, King Oscar II of Sweden and Norway invited King Chulalongkorn of Siam to visit Sweden for an art and industry exhibition. The King of Siam also had a keen interest in Sweden’s sawmill industry and took the opportunity to witness it first-hand. Travelling north of Stockholm, the Siamese monarch was reported to have particularly enjoyed the Swedish countryside and the light summer nights. King Chulalongkorn travelled with his entourage via train and boat before the final leg of the journey was made along a dusty road by horse and carriage to reach the small town of Utanade. Local people waved and cheered the Siamese party as they travelled north and notes made at the time by King Chulalongkorn’s secretary reveal how touched the king was by the welcome he received from the Swedish people.

Fifty years after the visit of King Chulalongkorn to Utanade, improvements were made to the road that the royal party travelled along by horse and cart. The work on that road reminded the local people of the time when an illustrious visitor travelled there from the Far East and the road was named ‘King Chulalongkorn’s Road’ in his honour.

In 1992, a Thai folk-dancing troupe visited Ragunda municipality where they were told about the road that had been named after King Chulalongkorn. Visiting the location near Utanade the Thai travellers were amazed by the story and a year later an association was formed to try and construct a memorial building to the royal visit of 1897. Fund raising and sponsorship in Sweden and Thailand resulted in construction work commencing in 1997.

Swedish companies managed the project and were responsible for the main structure of the pavilion, but the intricate decoration and artwork was completed by King Bhumibol Adulyadej’s ‘s own craftsmen working in Thailand. The location of this particular pavilion created some unique challenges for the Thai artisans who are used to working on buildings that need to withstand tropical conditions rather than the colder Swedish climate. The product of the Thai craftsmen was transported from Thailand to Sweden by sea in 1999.

The Royal Thai Pavilion at Utanade has a floor-surface of 75 square metres with an internal height of 7 metres (23 ft.). In total (including the spire) the pavilion rises to a height of 26 metres (85 ft.). A wall made from Swedish limestone frames the impressive white building with each individual stone weighing in at a hefty 20 kgs. The interior of the pavilion houses a bronze life-size statue of King Chulalongkorn.

Annual Events in Sweden on July 19 and October 23

The date of King Chulalongkorn’s visit to Utanade, July 19, is now commemorated with an annual ceremony hosted by Swedish and Thai dignitaries in Utanade. Highlights of the day include a parade and cultural performances of traditional Swedish and Thai music and dance. In Thailand, October 23 is a national holiday in honour of King Chulalongkorn and commemorative events are also held on the same day at the Royal Thai Pavilion in Utanade.