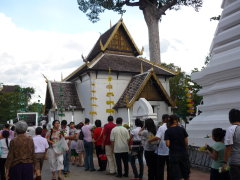 Many towns and cities in Thailand house what is known as the ‘city pillar’ which is made of wood or stone and is often located at the geographical heart of the city. Traditionally, these pillars were created when a new settlement was established. Different regions of Thailand have different names for these pillars, but in the old northern Thai language, the pillars were called ‘inthakin’. Some historians believe the pillars represent a phallus and were created to encourage the fertility of the land which would have been crucial to an agricultural society. These ancient animist beliefs pre-date the arrival of Buddhism in Thailand, but even as Buddhism spread the old traditional beliefs still remained, just as they do in so many aspects of Thai society today.

There is an ancient legend that tells the story of how the original site of Chiang Mai was a town plagued with demons. A hermit asked the god Indra for help and from the heavens came the Inthakin pillar to protect the town and the people from the demons. However, in time the people neglected the pillar and the demons returned and the town was left in ruins. In 1296, King Mengrai chose the site of Chiang Mai to be the new capital of the Lanna kingdom. King Mengrai found the old city pillar amongst the ruins of the town and was told the legend about the demons. He sited the pillar at the geographical centre of the new city in a temple called Wat Sadue Muang. Today, the remains of this temple can be seen within the grounds of the Cultural Hall (just behind the Three Kings Monument) in the old town area of Chiang Mai. 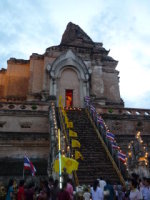 In the year 1800, the city pillar was moved from Wat Sadue Muang to the present site at Wat Chedi Luang, a short walk away along Phraplokkao Road. At the same time as the Inthakin pillar was moved to Wat Chedi Luang, a yang tree (gum tree) was planted. As you walk into the main entrance of the temple compound this is the large tree on the left hand side standing watch over the white shrine (pictured top) which now houses the city pillar. The ancient chedi behind the temple (pictured right) was once home to the Emerald Buddha which is now at Wat Phra Kaeo in Bangkok.

The Inthakin Festival is significant for Chiang Mai and her people who are mindful of the old beliefs and traditions. If the city pillar is respected, then Chiang Mai and its residents will be safe, happy and prosperous. The festival takes place according to the lunar calendar, but is usually in late May or early June. This year, 2009, it has been from May 20-26. The event draws tens of thousands of people each day, especially in the evening when the crowds throng Wat Chedi Luang to pay respects and make merit. As well as paying homage to the city pillar, it’s also a chance to respect all of the Buddha images including the Fon Saan Haa Buddha which is paraded through the streets in a colourful ceremony at the start of the festival. The name of this Buddha translates as ‘100,000 raindrops’ and during the parade the sprinkling of lustral water on the image is to encourage rain for the crops. 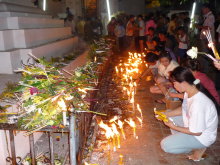 The road outside Wat Chedi Luang is lined with food stalls whilst inside there is a mini-fairground, and a stage with displays of traditional Thai dancing and music. There are also plays depicting the ancient legends of the region. Lines of people queue up to make merit and pay respects to the Buddha images sited all around the Wat Chedi Luang compound. However, only men are allowed to enter the shrine housing the city pillar. Women are obliged to light their candles and place their flowers outside the shrine.