It is thought that the Royal Barge Procession first took place in the 14th century during the Ayutthaya period of Thailand’s history. Much of the original pomp and ceremony has remained in modern times with specially arranged music and verse to accompany the hundreds of oarsmen all dressed in Ayutthaya-style uniforms. Although it’s an infrequent event, it does still take place on Bangkok’s Chao Phraya River for certain special occasions. In recent years the Royal Barge Procession was held in October 2003 for the APEC meeting in Thailand, in 2006 for HM the King’s Diamond Jubilee celebrations and in 2007 for HM the King’s 80th birthday. A procession was scheduled for October 2011 for the Royal Kathin Ceremony to honour HM the King’s auspicious 84th birthday celebrations. However, that was postponed because of the flood situation in Thailand in October 2011 and that re-arranged event will now take place this Friday, November 9, 2012. 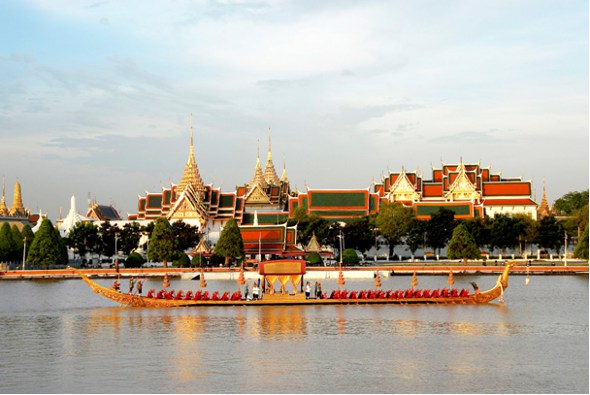 The Royal Barge Procession takes place along the Chao Phraya River in Bangkok this Friday from 3pm. The route is from King Rama VIII Bridge to Wat Arun (Temple of the Dawn). The barges are expected to take approximately one hour to cover the journey with various viewing spots located along the river. Large crowds are expected to line the procession route so you will need to arrive early to guarantee a decent viewing spot. Please also note that there will be restrictions in place for the usual passenger river boats and ferries and some bridges will also be closed for part of the day. If you are in Thailand but can’t make it to the procession in person, live coverage will take place on Thai television.

At the heart of the procession will be the royal barge and the 51 traditional barges, but with escort barges and other vessels there will be over 100 boats in total in the flotilla which will also feature more than 2,000 oarsmen dressed in traditional uniforms. HRH Crown Prince Maha Vajiralongkorn will preside over the Royal Barge Procession and Royal Kathin Ceremony at Wat Arun on behalf of His Majesty the King of Thailand.

History of the Procession

Dating back to the 1300s, the Royal Barge Procession continued on regular occasions up until the Burmese invasion of Ayutthaya in 1767 which resulted in hundreds of the barges there being burned and destroyed. Following the sacking of Ayutthaya, General Taksin established the new capital at Thonburi and ordered the reconstruction of the barge fleet. In the wake of Taksin’s death, General Chakri became king and the first monarch (Rama I) in what would become the Chakri dynasty. It was King Rama I who moved the capital from Thonburi to the other side of the Chao Phraya River to present-day Bangkok and also established the Royal Kathin Ceremony using the fleet of barges.

The Thod Kathin Robes Ceremony takes place following the end of Buddhist Lent (Awk Phansa). As part of the Royal Kathin Ceremony, new robes are presented to monks at Wat Arun in Bangkok by the Thai monarch or his representative who travels on the royal barge carrying the robes.