You are here: Home / Food / Cooking with Poo 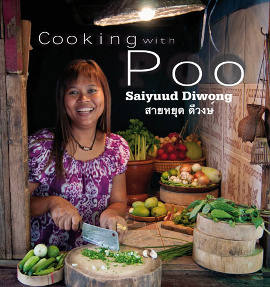 The title of this Thai cookery book caused a bit of a stir online earlier this year when it was awarded a prize for the ‘Oddest Book Title of the Year’. The author of the book, Saiyuud Diwong, is a Thai chef whose nickname in her native language happens to be ‘Poo’, the Thai word for crab. There was no prize for Khun Poo (Khun is the polite title used in front of somebody’s first name in Thailand) but the contest organisers, the Bookseller magazine, did make a donation to the charity that helped to create Khun Poo’s cookery programme which is based in the Klong Toey area of Bangkok.

You don’t have to travel very far south from the shops and hotels of downtown Sukhumvit Road before you reach Bangkok’s largest slum area located just north of the Chao Phraya River. Klong Toey is home to an estimated 100,000 people, a mix of poor people from Bangkok plus economic migrants from other regions of Thailand (mainly the north and north-east) who have been drawn to the Thai capital by the prospect of work. The numbers at Klong Toey are swelled still further by immigrants from neighbouring countries like Laos and Burma who arrive with no legal status or documents and are left with little option but to take the dirtiest and lowest paid jobs on offer. With basic amenities like fresh water and electricity in limited supply, the Klong Toey residents have no legal rights to occupy the land and live with the threat of eviction hanging over them.

Saiyuud Diwong is a long-time resident of Klong Toey. It was from this deprived area of Bangkok that Khun Poo emerged to show her talent and spirit. Before turning to cookery, Khun Poo worked a number of jobs including low-paid factory work and struggled to make ends meet as one of only two wage-earners in a family of ten. In 2007, Khun Poo made the decision to start her own business aided by her fellow residents and Anji Barker, an Australian NGO worker who had been working with the Klong Toey community centre for more than a decade. With backing from Anji, Khun Poo sold home-cooked food to her neighbours operating her business out of the front-room of her house. After seven years, Khun Poo was able to diversify and run her own cookery school for local residents and tourists. The success of the cookery school meant that Khun Poo was able to rent a dedicated room that can accommodate up to ten students and she is now running her class six times a week.

Helping Hands is an organisation that supports Klong Toey residents to develop small businesses and helps individuals by linking them with markets and credit support. Cooking with Poo is just one of the Helping Hands success stories with other projects including handicraft production, a coffee stand and a sushi delivery service.

You too can cook with Poo

If you are planning a visit to Bangkok, you too can cook with Poo. Cooking classes are open to tourists, but you will need to book at least one or two weeks in advance. Seeing for yourself the environment where Khun Poo lives and works you will also experience a unique slice of Bangkok life that most tourists will never see. And you will also meet the lady herself and be able to say that you went to Thailand and you cooked with Poo. If you can’t get to Bangkok but still like the idea of cooking with Poo, you can always order her book online. Full details of the cookery classes and the book available from the Cooking with Poo website.