In parts of south-east Asia the durian fruit is held in such high esteem that locals may refer to it as the ‘king of fruits’. There are many different types of durian, with popular Thai varieties including mong thong (golden pillow), gan yao (long stem) and chanee (gibbon). They all have their own unique taste and qualities, but typically, the fruit is the size of a small football (soccer ball), green or green-brown in colour with small spikes on the outer skin. The part of the durian which is eaten is the cream/yellow-coloured flesh on the inside. Cutting open the durian also releases the smell which is synonymous with this particular fruit. The durian does possess a certain reputation and in Thailand (and many other parts of south-east Asia) some hotels and offices have banned them from the premises because of their pungent odour. In one particular apartment block I used to live in, there were signs in Thai telling residents and visitors “no pets, no drugs, no weapons, no durian”. 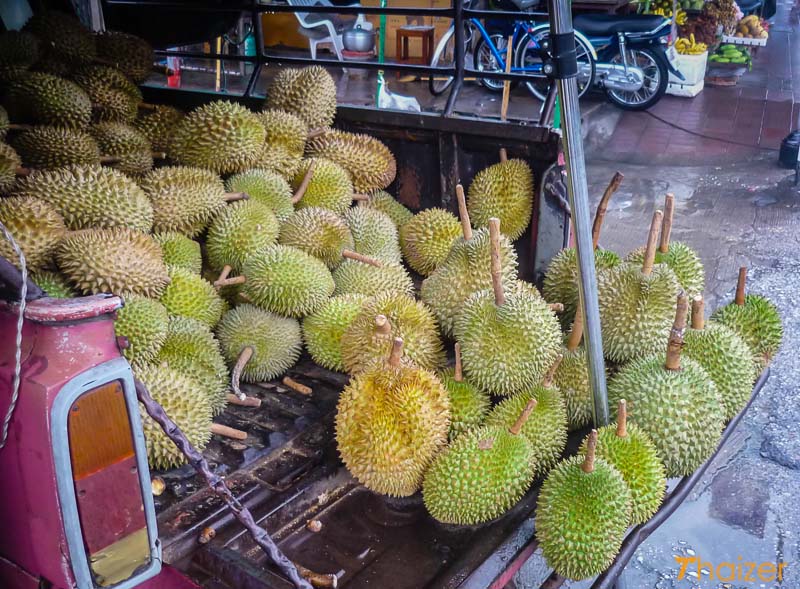 If the durian fruit smells so bad, why is it so popular?

To the durian connoisseur, there is nothing quite like the taste of fresh durian. Aficionados of the fruit say that it is the unique smell and texture of the durian that plays such a large part in the overall taste sensation. I must admit I am not big fan of the durian although I’ve tried a few different varieties of the fruit with mixed results. They do vary in the strength of the odour which can range from a whiff of sewage, to rotten meat, to rotten onions. For those who can get beyond the smell barrier, the taste of the creamy durian flesh can be very pleasant with a rich mix of flavours including hints of custard, spices and almonds. Despite that, I personally remain unconvinced by the dubious delights of the durian. It’s certainly something worth trying when you visit Thailand so you can decide for yourself. You may become an admirer of the king of fruits, but if you don’t at least you can say you’ve tried it. If you find you can’t stomach the smell of fresh durian, you can always opt for the next best thing and try a durian shake or durian ice cream which will give you a sample of the flavour but with none of the smell.

The various durian producing regions have different peak times for harvest, but the main season for durian in Thailand is from mid-April to mid-September. Outside of the main season it is still possible to find durian in some Bangkok markets although the price of the fruit is usually higher.