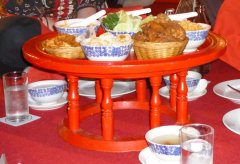 The khan toke is a tradition of northern and north-eastern Thailand. The phrase ‘khan toke’ refers to the small pedestal tray or low round table which is made of teak (or in some cases a bamboo and rattan combination) and is used as a dining table for special occasions such as weddings, funerals or temple festivals. Guests sit on the floor around the table as various dishes are served. At a khan toke dinner show, there will be various displays of traditional Thai dancing. Some of these shows are more ‘touristy’ than others, but they are still a pleasant and relatively cheap way to spend an evening.

Whenever I’ve had friends or family visit me in Chiang Mai, I’ve taken them to the khan toke dinner show at the Old Chiang Mai Cultural Centre. This venue has a good reputation and the guests I’ve taken there have thoroughly enjoyed the evening. Depending on the season and weather, you may be seated at the indoor or the outdoor venue although the format of the dinner and the show is more or less the same. Most of the seating is on the floor set around small tables, but there is also some seating around a standard height table for those that may find the alternative too uncomfortable.

The food consists of a variety of dishes including fried chicken, chili paste (for dipping), Burmese pork curry, vegetables, fried pork skin and fried bananas. Steamed rice and sticky rice is also served and there is a fruit platter at the end of your meal. The entrance ticket includes the dance show and food but drinks are charged separately (alcoholic and non-alcoholic drinks available). The food isn’t spicy and the evening is suitable for children as well as adults. 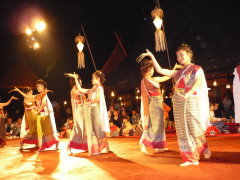 The music and dance show takes place in two parts. The first part is a display of various traditional Thai dances such as the Fingernail Dance which is performed as guests sit and enjoy their meal. The final dance of the first half is the Circle Dance in which some of the dancers will invite members of the audience to take part and this often causes some amusement. The second half of the show takes place in another auditorium where various hilltribe dances and customs are showcased. The participants here are all genuine hilltribe people and they come from various groups such as the Lahu, Akha and Hmong.

If you are interested in visiting a khan toke dinner show, your hotel or guest-house can probably book it for you. In Chiang Mai, any tour company can book your place at a khan toke dinner show and the price will normally included transport to and from the venue. There are a number of different venues so you will need to specify if you want to go to the Old Chiang Mai Cultural Centre. Alternatively, you can always book directly with the Cultural Centre although it doesn’t work out much cheaper than going via a tour company. The dinner show is nightly from 19.00 to 21.30. Prices vary depending on who you book with, but expect to pay in the region of 500 to 600 Baht per person.