Kuay jab noodle soup isn’t as widely available as many other noodle dishes such as Phat Thai, but is worth trying if you haven’t done so before. It makes for a satisfying meal at any time of the day, but especially for breakfast served with a glass of hot Thai tea or coffee and washed down with a refreshing Chinese tea to aid digestion. 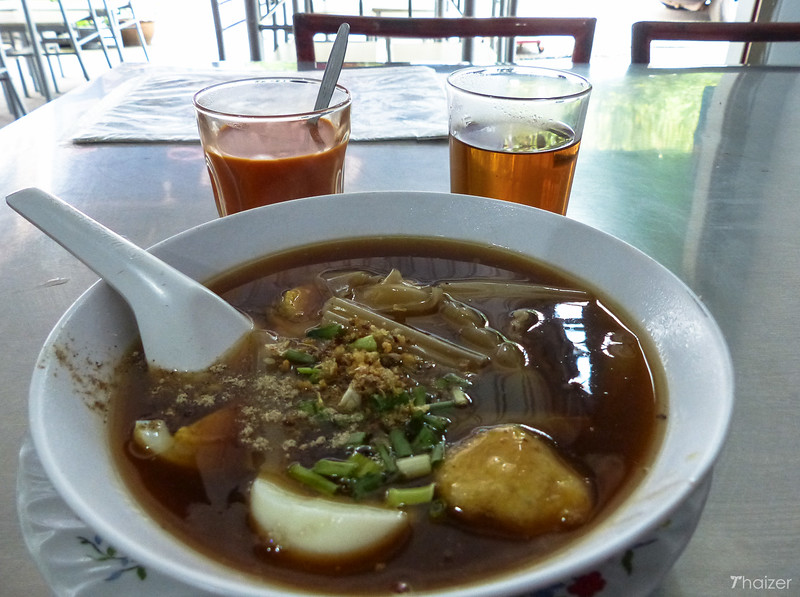 The rice noodles are unusual because they are rolled into small tubes similar to penne pasta. The ingredients can vary, but typically pork will feature heavily in a bowl of kuay jab with pork balls, thin pork slices and crackling all included. Boiled eggs are often added for protein. Offal is also added to the hot broth together with herbs and pig blood curd/jelly to give it a rich, brown tone. That might not sound too appetising to some, but the result is a delicious and sweet, yet peppery soup with a wonderful mixture of textures and flavours full of goodness that sets you up for the day.

It’s thought that kuay jab originates from southern China and you can often find this in areas of Thailand where there is a Thai-Chinese community such as Yaowarat in Bangkok. But you may also stumble across food stalls and restaurants selling kuay jab noodle soup just about anywhere. The bowl of kuay jab in the photo was from a small restaurant in Nong Khai and cost 40 Baht.

Why are There Zebras at Shrines in Thailand?
Next Post: Thai Police Make Uighur Connection to Bangkok Bomb