Phat Thai, which can also be written in a number of different ways (including pad Thai or phad Thai), is one of Thailand’s most famous dishes. In Thailand it is usually eaten alone as a one-dish meal rather than with rice or any other food. Some stalls and hawkers specialise in phat Thai which can be eaten as a lunch, dinner or supper dish. Phat Thai isn’t usually very spicy and for many foreign visitors to Thailand, phat Thai soon becomes a favourite meal. 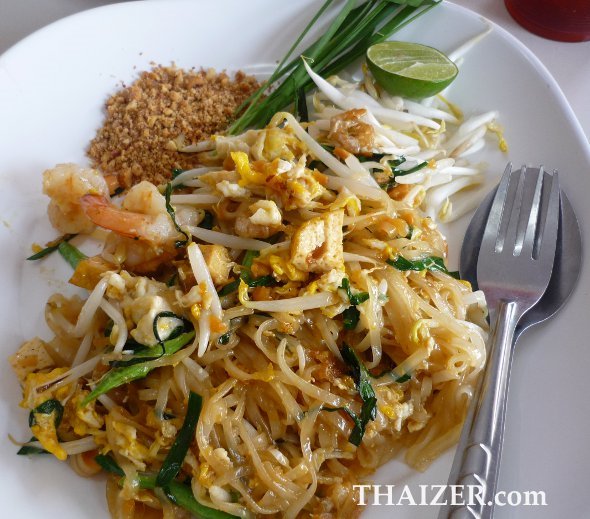 The word ‘phat’ refers to the frying process of the ingredients which will always have thin rice noodles as a key ingredient. Different stalls and restaurants will have their own particular recipe, but typically a plate of phat Thai will include scrambled egg (or omelette), dried shrimps, bean-sprouts, garlic, dry chilli powder, diced beancurd or tofu, tamarind, fish sauce (‘nam plaa‘) and minced turnip. Most restaurants and hawkers in Thailand will garnish the dish with ground peanuts (unsalted), a slice of lime and Chinese chives (which taste similar to spring onions but are stronger). Some variations of phat Thai may include pork or chicken, but shrimp is more common.

Similar versions of this dish are served throughout south-east Asia and it is believed that the basis of this dish was originally introduced into Siam centuries ago by Chinese or Vietnamese traders. The addition of local Thai ingredients such as nam plaa and tamarind gave the dish a Thai twist.

In the 1940s, the production of rice noodles was championed by the Thai prime minister. With post-war Thailand suffering from high levels of unemployment, the Thai government had the idea of encouraging individuals to set up their own hawker stalls and shops selling rice noodles. The added aim of this initiative was to cut down on the domestic demand for rice which in turn could allow more rice to be exported and thus improve the Thai economy. The production and sale of rice noodles was portrayed as a patriotic venture and it was with this wave of national pride that the Thai version of rice noodles would soon be produced all over Thailand and became known as phat Thai.

Where to Buy Phat Thai

Some stalls and hawkers will only sell phat Thai and you can expect to pay as little as 25 to 40 Baht on average. The dish pictured is phat Thai kung (phat Thai with prawns) which cost me 40 Baht at a roadside restaurant in Chiang Mai. In upmarket restaurants the price will obviously be higher, but the taste might not necessarily be any better than you can get from any one of the thousands of hawker stalls throughout Thailand that sell phat Thai.