The world-famous brand, Red Bull, can trace its origins back to the time when it was simply a pick-me-up tonic for Thai workers. Red Bull, or Krating Daeng in Thai, was invented by Thai businessman Chaleo Yoovidhya in 1981. The caffeine-rich drink soon became popular in Thailand with truck drivers, farmers, university students and those working long hours that needed to stay alert. Chaleo teamed up with Austrian businessman Dietrich Masteschitz in 1984 and the Red Bull drink recipe was adapted to suit Western palates and made the Thai-Austrian owners into multi-millionaires. Subsequent marketing really launched Red Bull as something more than an energy drink and it is now a truly international brand. 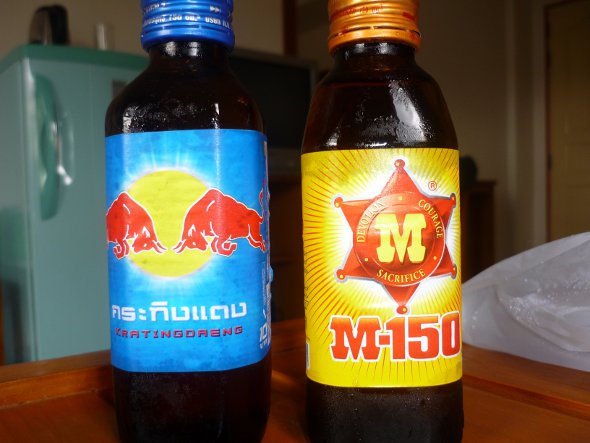 If you look in any supermarket or 7-Eleven convenience store in Thailand you will see numerous energy drinks lined up in the chiller cabinet. The pocket-sized bottles of Krating Daeng can still be seen, but they now compete with a wide array of other energy drinks such as M-150, Chalarm (Shark), Carabao Daeng (Red Buffalo) and Lipovitan. If you are in a pub or club in Thailand and ask for a vodka and Red Bull you may find that the drink doesn’t quite have the same taste you may be accustomed to. Although the familiar Western canned version of Red Bull is served in some establishments, it isn’t that common. In many cases if you order a vodka and Red Bull you will be served with the generic Thai version which is often referred to as ‘vodka Lipo‘ which will have a similar taste and effect. If you do over-indulge on the alcohol, you can always replace the black coffee with a bottle of energy drink or try the wonderfully named ‘Hang’ which is sold as a hangover cure.