Som tam is a dish which is native to the north-east part of Thailand (Isaan) but has become universally popular throughout the country. Whether you are in Bangkok, Chiang Mai or Krabi, you will see somebody selling som tam. You might not know what it is when you first see it, but once you’ve tasted it you’ll never forget it. 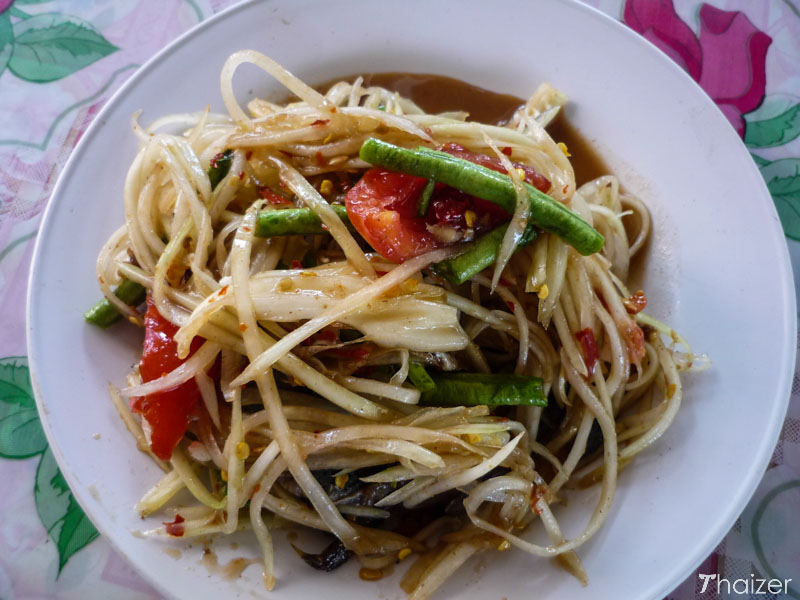 If you pass a hawker stall and notice a mortar and pestle, then the chances are that the stall is selling som tam. You may also hear it referred to as ‘papaya bok bok’ which gets its name from the noise that the mortar and pestle make when pounding the ingredients together. Green papaya (which is unripe and has a sour taste) is mixed with other ingredients including tomatoes, green beans, peanuts, dried shrimps and the all-important raw chillies. Thais tend to like their food very spicy and that is particularly true when it comes to som tam where it seems to be a case of the hotter the better. It isn’t unusual for a Thai person to eat papaya salad with 9 or 10 chillies mixed in and although it may cause watering of the eyes and a burning tongue, that’s just the way some people like it. Naturally you don’t have to have that many chillies and in fact, if you’re not used to Thai food I’d strongly advise not to. It’s perfectly acceptable to ask for just 1 or 2 chillies which will still give the dish a sufficient kick for most palates. If you want to try som tam but don’t want to burn half your mouth away, just say ‘phet nit noi’ when ordering which literally means ‘spicy little bit’, but is the equivalent of saying ‘not too spicy’. Remember also to add the polite khap if you are a man and kha if you are a woman so that it becomes ‘phet nit noi khap’ or ‘phet nit noi kha’ (‘not too spicy please’). Som tam is normally eaten with sticky rice which helps to take away some of the burning sensation of the chillies.