How to Make a Buddhist Offering (Wai Phra)

When Thai Buddhists visit the temple they will normally make an offering. This act is known as wai phra; wai being the traditional greeting with palms pressed together and raised towards the face and phra being the word for a Buddha image, monk or priest. 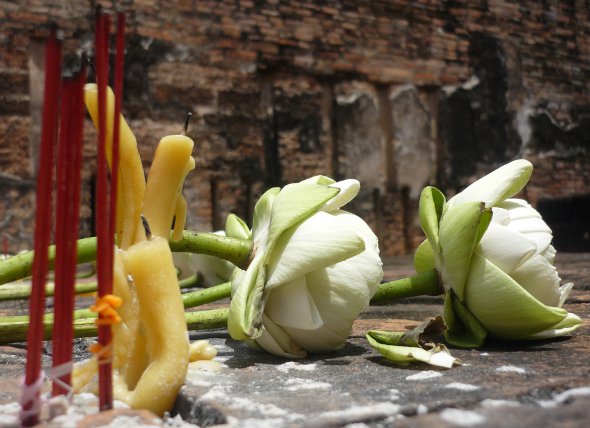 The usual offering made consists of a candle, some flowers (often a lotus), a small square of gold leaf and three incense sticks. The three incense sticks represent the Buddha, his teachings and the monastic order. These offerings can be brought with you or purchased at the wat. The act of wai phra is an individual action and each person may have their own way of going about it, but broadly speaking the following procedure will be followed. Firstly, the candle is lit and placed with the others which will be in front of a Buddha image. Then the flowers are placed in water before lighting the incense sticks using the candle. The three incense sticks are held between the palms of the hand in a wai gesture. Sitting in the respect position with feet tucked behind (so that they face away from the Buddha image), a Thai person making the offering will recite in their mind some set phrases from the Buddhist scriptures. This recital will be made in Pali, the language of the Buddhist scriptures. After this the person will often make another recital in their mind (this time in Thai) which could be a wish for good health for the family or even good luck for selecting the lottery numbers. The incense sticks are then planted into a container of sand and the small square of gold leaf is pressed onto the Buddha image. At the end, triple obeisance is performed with the individual bowing to the Buddha image three times whilst still kneeling and placing palms down on the floor at the end of each bow. A donation of money may also be made to the collection box which will go towards the upkeep of the temple and also earns merit for the person donating. 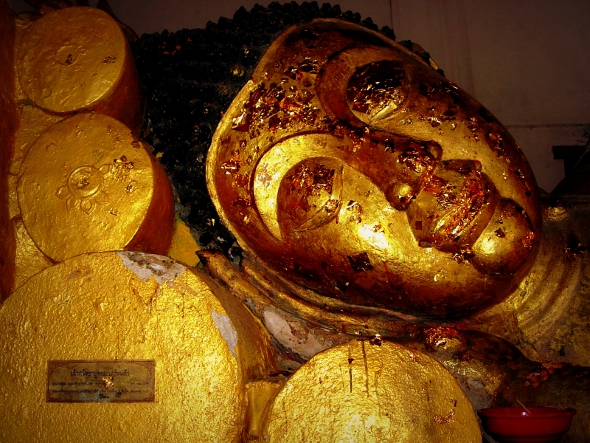 You don’t have to be Buddhist to make a wai phra offering and other Buddhists at the wat will be quite happy to see you wai phra so long as it is done respectfully. Don’t feel obliged to wai phra if it makes you feel awkward or uncomfortable. Instead, you can simply make a monetary donation (20 Baht is perfectly acceptable but more if you want) in the collection box. A donation isn’t compulsory but if you’ve spent time photographing the wat and temple grounds, then 20 Baht or so is a small price to pay and also ensures you gain merit. An important thing to note is that you should resist the temptation to take a good sniff at any flowers that you buy for the purpose of a Buddhist offering. The flowers are being presented to Buddha and are not for your benefit. According to Thai Buddhist belief, bad things can happen to your nose in a future life so don’t say that you weren’t warned!