The royal association with the seaside resort of Hua Hin is immediately evident if you arrive in Hua Hin by train. The quaint train station is the most photogenic in Thailand thanks mainly to the royal waiting room which stands apart from the other station buildings. The picturesque red and white pavilion was built during the reign of King Rama VI (1910-1925) and was once located at Sanam Chan Palace, the king’s country residence in Nakhon Pathom (west of Bangkok). It wasn’t until the 1960s that the pavilion was rebuilt at the current location of Hua Hin train station. 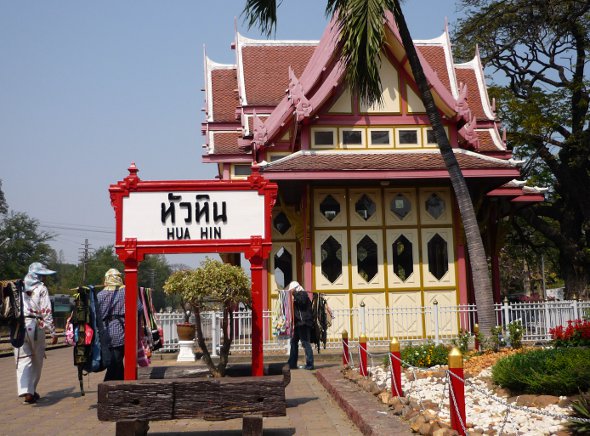 The construction of the southern railway between Bangkok and Malaysia resulted in Hua Hin becoming Thailand’s first seaside resort. The railway made it possible for residents of Bangkok to visit the seaside and enjoy the cool breezes and sea air. The location of Hua Hin soon became a firm favourite with King Rama VII who built his Klai Kangwon (‘Far From Worries’) Palace there in 1929. The royal endorsement of the area resulted in a tourist boom with an influx of rich and powerful visitors from Bangkok. To cater for the well-to-do newcomers, the Railway Hotel was also established in the 1920s as was Thailand’s first golf course, The Royal Hua Hin Golf Course, which is located just behind Hua Hin railway station. 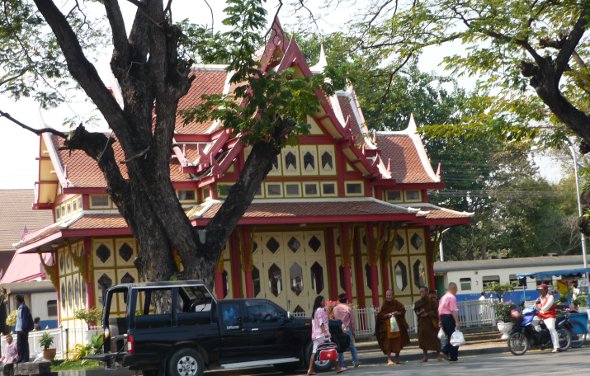 Although much about Hua Hin has changed since the 1920s, the train journey from Bangkok is still a slow trundle and not much quicker than it was almost a century ago. Average journey time between Bangkok and Hua Hin by train is approximately 4 hours. Hua Hin railway station is conveniently located near the centre of town at the end of Thanon Damnern Kasem. Look out for the statue of Pone Kingpetch, one of Thailand’s sporting heroes, which is also located on Thanon Damnern Kasem close to the train station.