Close proximity to Chiang Mai means that Lamphun is often overlooked by overseas tourists. Although there isn’t as much to see and do in Lamphun as there is in its big brother located 30km (20 miles) away, the smallest province in the north of Thailand is still an enjoyable area to visit. The provincial capital of Lamphun may be diminutive in terms of size and population, but with a history dating back more than a thousand years this was once the most powerful city in what is now northern Thailand.

History of Lamphun
There is some ambiguity about the date when Lamphun was first established as a city. Some chronicles say the 7th century although many historians place the date as around the mid 8th century. This was at a time when much of what is now central Thailand was a collection of Mon city states and part of the Dvaravati kingdom. The first recognised ruler of Lamphun was Queen Chama Thewi (also written as Chamadevi). The warrior queen was a Mon princess from Lopburi who was sent to rule the city of Lamphun which was then known as Haripunchai. Chama Thewi is credited with bringing Buddhism to the north and under her guidance the city flourished and became the most important location in the area we know today as northern Thailand. The riches and prestige of Lamphun would eventually attract the attention of King Mengrai, the ruler of the Lanna kingdom. In 1292, Mengrai besieged Lamphun and the city became part of the Lanna kingdom. After a period under Burmese control, the Lanna kingdom became a part of Thailand (then known as Siam) in the early 1900s.

What to see and do in Lamphun

Many of the historic sites and temples in Lamphun are conveniently situated in and around the centre of the city with Wat Phra That Haripunchai the main draw for Thai tourists. 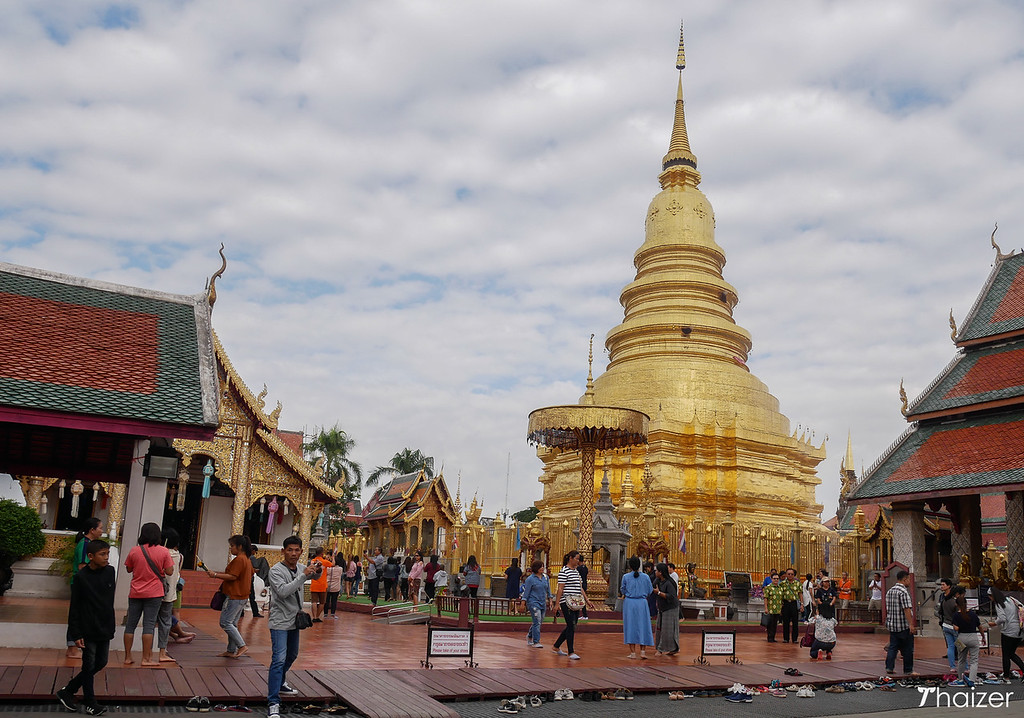 Wat Phra That Haripunchai
One of the most important temples in Thailand, Wat Phra That Haripunchai is home to a glittering golden chedi which is said to contain relics of the Buddha. The original temple on this site is thought to date back to the 11th or 12th century with the layout and style of the Lamphun temple used as a template for the subsequent construction of Wat Phra That Doi Suthep in Chiang Mai. For people born in the Year of the Rooster, a visit here is considered particularly auspicious and you will notice various rooster statues around the temple grounds. Make time too for the small local market outside the temple at the bridge across the Kuang River.

Haripunchai Museum
The Haripunchai National Museum is another site of interest close to Wat Phra That Haripunchai. Visitors can learn more about the history of Lamphun with a range of exhibits on display from ancient Buddha statues to more recent artefacts and curios from the 1900s. Open Wednesday to Sunday from 9am-4pm. Entrance fee for non-Thais is 100 Baht.

Wat Chama Thewi
The temple named after the first ruler of Lamphun, Queen Chama Thewi, dates back to the 8th century. The ashes of the queen are said to be buried under one of the distinctive pagodas located here and local people still make daily offerings to the warrior queen. The main ubosot features murals depicting the life and times of Queen Chama Thewi and adjacent to the main temple building is a small museum dedicated to her. A separate museum within the temple grounds features the work of the famous Lamphun monk, Kruba Srivichai. 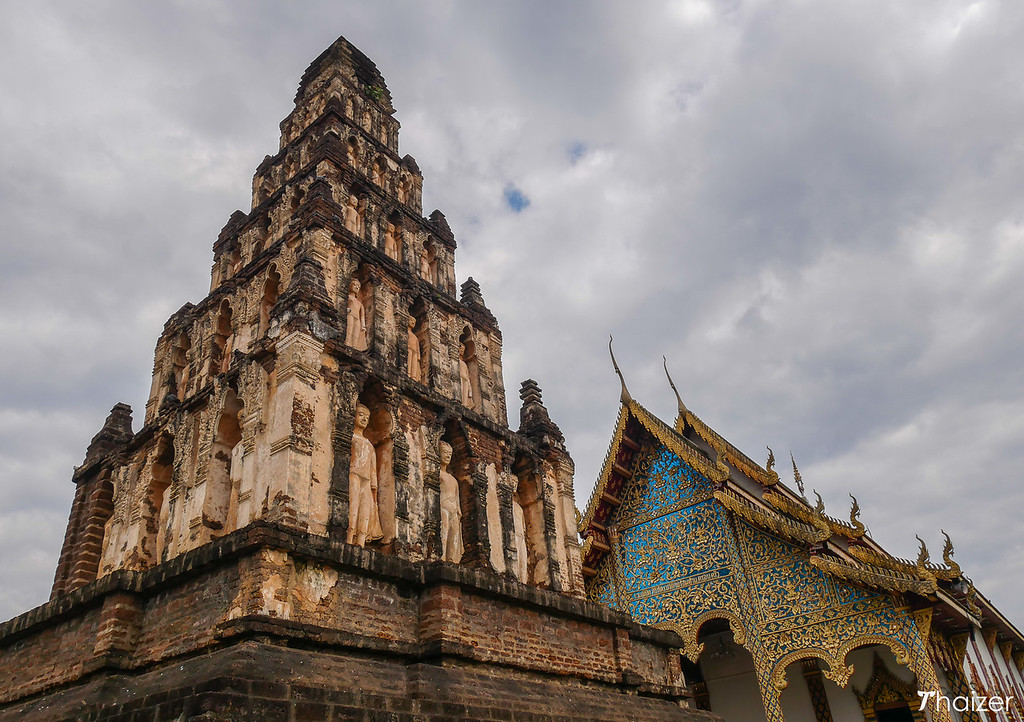 Kruba Srivichai Monument
Born and raised in Lamphun province the famous ‘engineer monk’, Kruba Srivichai, is a figure of immense pride to the people of north Thailand. Under his guidance, more than 160 temples were renovated in the north of the country. A huge statue in honour of Kruba Srivichai sits on top of the hill in front of Wat Doi Ti just outside of central Lamphun.

Wat San Pa Yang Luang
Located to the north of the central area and moat, Wat San Pa Yang Luang is regarded as one of the most beautiful temples in the whole of Thailand. Although most of the structures seen here today are relatively modern, the exquisite carvings make this a spectacular location to visit. The site was originally a Hindu shrine, but became what is said to be the first Buddhist temple in the north of Thailand when Queen Chama Thewi arrived in Lamphun and used this site to practice Buddhism. When she died this was the site used for her cremation.

Wat Phra Yuen
Located across the river to the east of Wat Phra That Haripunchai, Wat Phra Yuen enjoys a quiet and picturesque setting. The main feature of the temple is the large stupa with four golden Buddha images and combined with the attractive surroundings this is a temple worth seeking out when you are in Lamphun.

Ku Chang and Ku Mah Chedi
This is a location that is popular with local people rather than a must-see attraction, but if you in the vicinity is worth a look. There are two stupas here with the main one, Ku Chang, commemorating the war elephant of Queen Cham Thewi. The second stupa, Ku Mah, is in honour of the horse belonging to Chama Thewi’s son. The respective stupas are said to mark the burial site of the royal animals and despite the passage of time, garlands and offerings continue to be made here.

Doi Khun Tan National Park
One of Thailand’s oldest national parks, the scenery at Doi Khun Tan is attractive rather than spectacular. There are, though, a couple of pleasant hiking trails and visitors can enjoy the tranquil surroundings with an overnight stay in comfortable National Park bungalows.

Where to stay in Lamphun

Although Lamphun city be visited as a day trip from Chiang Mai, there are some decent accommodation options if you want to explore the city and surrounding areas at leisure.

Food and drink in Lamphun

Lamphun is especially famous for its longan orchards. Known in Thai as ‘lam yai‘, the longans feature in number of local dishes including longans and sticky rice (khao niao lam yai), and longan flavoured noodles. Longan season is from July to October with the annual Lamphun Lam Yai Festival held in August.

Pay a visit to Nong Dok Market or Wat Chai Chanuek Market to take in the sights, sounds and smells of market life. Serious foodies should take a look at the Local Table experiences from Take Me Tour* to find out some of the best places in Lamphun to sample northern Thai favourites including khao soi and khanom jeen nam ngiao.

On the trail of food and culture in historic Lamphun »

Most of the historic sights with Lamphun city centre can be covered on foot or bicycle. There is also the option of taking the tourist tram service that departs from Wat Phra That Haripunchai and covers nine sites around Lamphun for 100 Baht. Anybody can use the tram, but it is geared towards Thai tourists with an on-board commentary in Thai. Samlors are also available for short journeys around town.

Bus
The bus station in Lamphun is located to the south of the city centre, but many of the express buses that operate to and from Chiang Mai drop passengers at a location on the main highway away from the town centre. For local buses that terminate at Lamphun bus station, head to Chang Puak bus terminal in Chiang Mai or take a blue songthaew.

Songthaew
If you are travelling from Chiang Mai, you can take a shared blue songthaew to Lamphun from either Waworot Market or the other side of Nawarat Bridge for 20 Baht. The journey is slow, but has the advantage of taking the scenic route to Lamphun instead of the Super Highway.

Train
Taking the ordinary train from Chiang Mai to Lamphun is a pleasant way to travel. Tickets for the 09.30 departure can be purchased on the day of travel and cost just 11 Baht for a second class carriage. Arrival time in Lamphun is 09.59. For the return journey it’s easier to take a bus or songthaew back to Chiang Mai. If you are heading on to Lampang from Lamphun, the train will take you over the famous White Bridge and through Khun Tan Railway Tunnel, the longest of its kind in Thailand.

Local events and festivals in Lamphun

September/October: Salak Yom Festival
Merit making ceremonies for the Salak Yom Festival take place at different temples around Lamphun province with the biggest event at Wat Phra That Haripunchai. The festival is celebrated by the Yong people of Lamphun who present decorative ‘gift trees’ known as ‘salak yom’ to monks and temples as a way of making merit and receiving blessings.

November: Yi Peng Lantern Festival
Although the most famous of the Yi Peng Lantern Festivals is held in Chiang Mai, there are similar, albeit smaller, events held in most of the northern provinces including Lamphun. If you find Chiang Mai too busy for Yi Peng, head to neighbouring Lamphun. Temples and streets are decorated with paper lanterns and khom loi sky lanterns are launched at a number of locations including the Kruba Srivichai Monument.