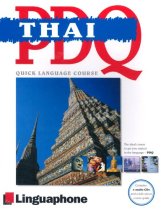 Whatever country you visit, local people usually appreciate if you make at least some effort to speak their language. Thailand is no different in this respect, but achieving the correct pronunciation isn’t so easy.

Thai is a tonal language and makes use of some sounds and tones unfamiliar to many Westerners. In addition to this, translating Thai script into Western form presents its own problems. For instance, many people will be familiar with the Thai greeting, sawatdee. Depending on which guide book or phrase book you read, this may be spelt as as sawasdee, sawasdii, sawatdee or sawatdii. All are correct depending on which transliteration method is used. Another example is the Thai word for island, ko, which can also be written as koh. Hence Ko Samui in some books and Koh Samui in others.

The best way to learn how to pronounce something is by listening to native Thai speakers. Most regions have their own dialects, but even in these regions the majority will be able to speak what is broadly known as ‘Central Thai’; a standard form of Thai taught in schools. Learning this standard form of Thai is going to be more practical than trying to learn the dialect spoken in Yala or the language spoken by the Akha hill-tribes.

In most of the tourist areas, Thai people will speak at least some degree of English and are usually willing to help if you show a genuine interest in learning a few words of Thai. They will probably laugh at your attempts to get to grips with the Thai language, but it’s a great way to break the ice.

Two books which are useful are the Lonely Planet phrasebook and the Thai-English-Thai Dictionary (by Benjawan Becker). Both are pocket size and have the advantage of sections of Thai script to enable you to show a Thai person the word you want to say. The latter book by Benjamin Becker is widely available in Thai bookshops for a retail price of around 425 Baht ($12.50 or â‚¤6.25).
Lonely Planet Phrasebook on amazon.com
Thai-English-Thai Dictionary on amazon.com

For those who will be spending an extended stay in Thailand they might consider signing up for a Thai language course. The AUA (in Chiang Mai, Bangkok and Pattaya) offer highly recommended introductory courses in standard Central Thai.