‘I don’t have to leave the mountain. The village provides me with everything I need. Life is good’, Khun Somboon tells me. The village medicine man has witnessed plenty of changes during his time living in Baan Mae Kampong. The picturesque mountain village an hour’s drive east of Chiang Mai is a thriving community now with more than 300 people living here, but there was a time when that community and their traditional way of life was under threat.

Although the village of Baan Mae Kampong wasn’t officially founded until the early 1900s, it’s thought that the first farmers moved to the area from nearby Doi Saket more than 200 years ago. Those early settlers came here to farm the land and grow tea which was used to make a local delicacy know as ‘mieng‘ from fermented tea leaves. Over the years, the demand for mieng dropped and the villagers started to look for other sources of income.

Tea production at Mae Kampong
Mae Kampong is 1300 metres above sea level and tea plants thrive in the highland forests here. Villagers are able to harvest tea leaves up to five times a year. The traditional way of preparing the leaves is to steam them and leave them for a few months to ferment with a combination of salt, oil, fat, garlic and dried fish. The finished product, known as mieng is popular in rural north Thailand. Locals chew mieng after meals or as an energy boost when working.

In the 1980s the people of Mae Kampong began growing coffee under the Royal Project. They also used the stream running through the village to produce hydro-electric power. In the 1990s the community adapted again. The Thai government were encouraging each sub-district (tambon) to produce a product, service or activity that it could be associated with as part of the new One Tambon One Product (OTOP) scheme. The idea of OTOP was initially a concern for the village headman until he decided to propose Mae Kampong as an eco-tourism village to take advantage of the natural surroundings and beautiful location. Steps were built to make waterfalls and natural attractions easier to reach and some residents opened their doors as homestays for tourists. 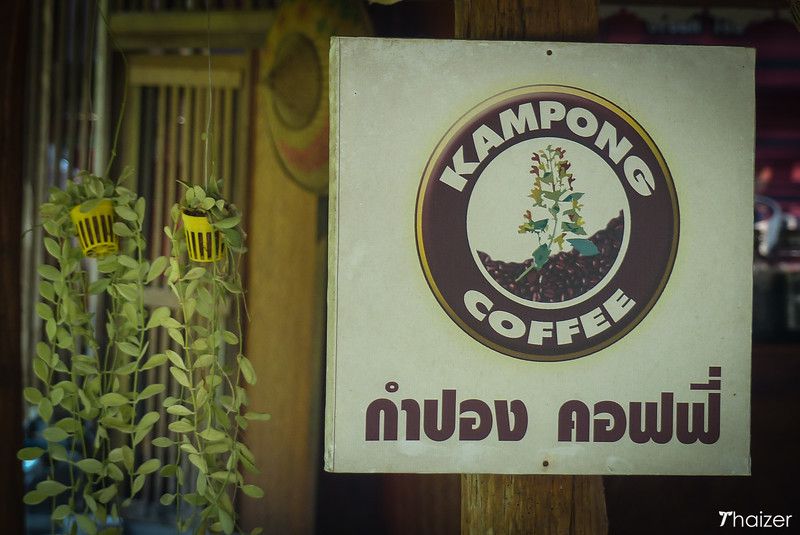 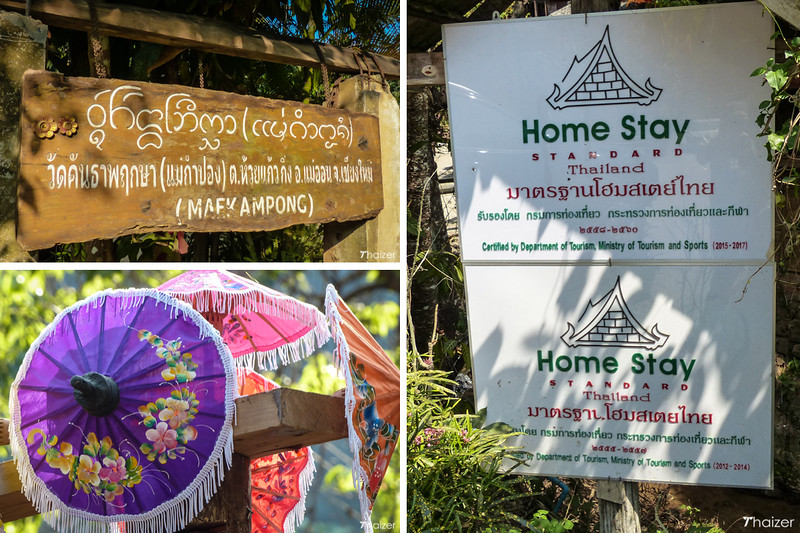 The Mae Kampong homestay program has proved to be a big success benefiting visitors and villagers alike. The village acts as a co-operative with the revenue brought into the village used to help local projects and preserve the community. Last month I was able to see in person how the award-winning homestay and various eco-tourism initiatives have helped the Mae Kampong community.

After an exhilarating morning spent ziplining through the trees that surround Mae Kampong, I’m treated to a hearty lunch and listen to the gentle lilt of Lanna music as a group of locals play their traditional instruments to welcome guests to the village.

After lunch I have ample time to walk around the village to enjoy the atmosphere and relax into the rustic charm of Mae Kampong. A middle-aged Thai lady approaches me with a cheery ‘hello’. We strike up a conversation and the lady, called Noy, tells me she is from Bangkok and is a regular visitor to Mae Kampong. Noy enjoys the tranquility of nature and the uncomplicated way of life found here. ‘It’s so different to Bangkok. So quiet, so beautiful. It reminds me of when I was a child living in the countryside with my family’. 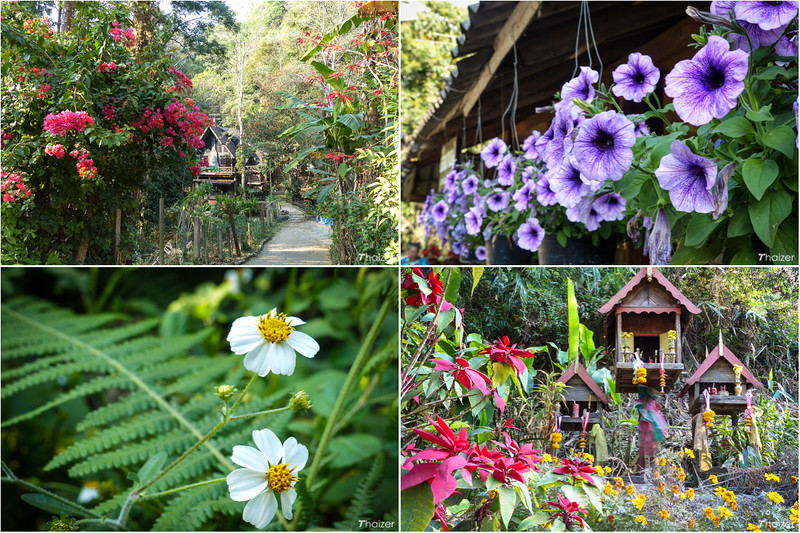 The majority of tourists staying overnight at the Mae Kampong homestays are Thai. Some older visitors are drawn here by nostalgia and others by the chance to get away from the busy pace of modern life.

There are currently more than 20 homestay properties in Mae Kampong. The numbers are limited and they all have to meet official standards set by Thailand’s Department of Tourism.

After a leisurely few hours strolling around, drinking the delicious local Kampong coffee and chatting with fellow tourists, it’s time for a traditional Thai massage before dinner. The massage ladies are part of a group helping welcome tourists to Mae Kampong. Many of the villagers are members of specific groups covering various occupations. These include the local guide group, the traditional music group and the bamboo weaving group. These community groups help preserve old traditions, but also benefit tourists visiting Mae Kampong. 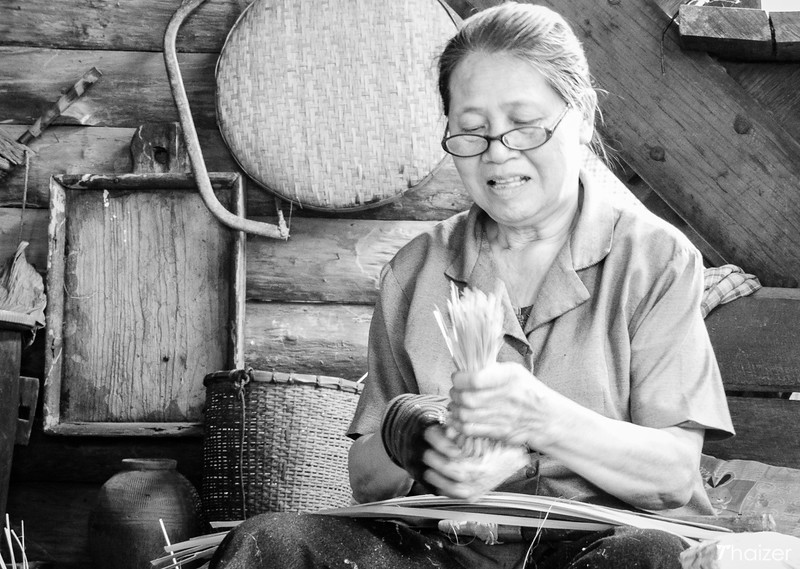 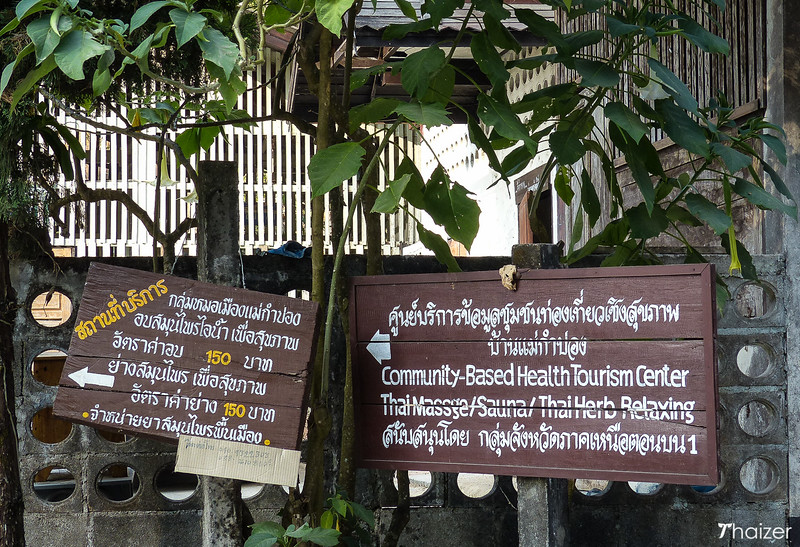 There are local ‘mom and pop’ stores in Mae Kampong and a few quaint coffee shops with younger Thais busy snapping selfies, but no 7-Elevens. The lady from my homestay makes me laugh when she proudly announces ‘supermarket’ in response to the toot-toot of a vehicle’s horn. In Mae Kampong, Tesco Lotus comes in the form of a pick-up truck delivering once in the morning and once in the evening. As the villagers gather round the truck, the cool evening air is filled with the sing-song sounds of the northern Thai dialect. A ‘sao baht’ here, a ‘jao‘ there and everywhere smiles and laughter. Life seems sabai sabai in Mae Kampong. 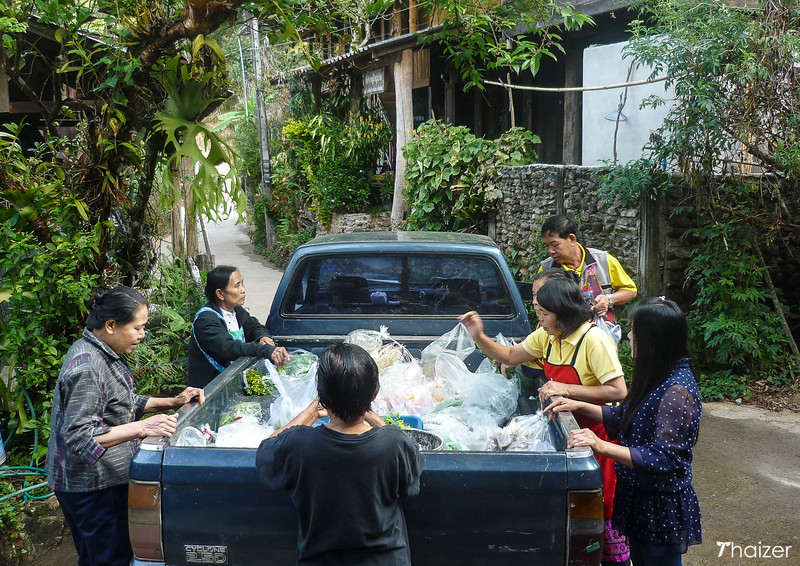 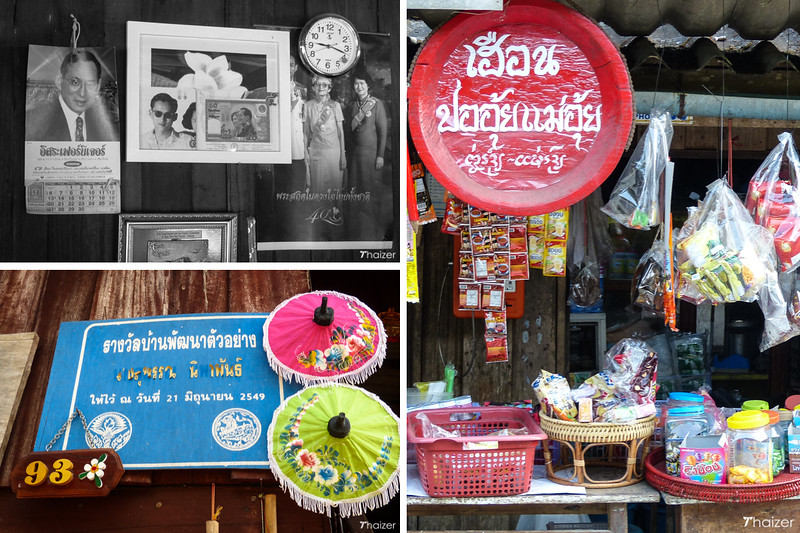 Inside my homestay, a traditional northern Thai dinner is laid out on a circular tray known as a ‘khan-toke‘ and filled with tasty Lanna food. Nam prik ong, kep moo and gaeng hinlay and a never-ending supply of rice all help to satisfy my stomach. After thanking my host for her delicious home cooking, it’s up the wooden stairs to my room for the night. There are no luxuries here and nor do I want them. A simple mattress on a wooden floor and a duvet to keep off the February chill is all I need for the night. The cool mountain air provides nature’s air-conditioning and before the clock reaches 9pm my eyes have drooped and I’m out for the count. ‘Lub sabai‘ as the Thais say. Sleep well. No alarm is needed in the morning. A chorus of cockerels announce to the overnighting townies the dawning of another beautiful day as the early morning rays of light seep through small cracks in the wooden shutters. Rak baan nok. Rak Mae Kampong. Love the countryside. Love Mae Kampong.

my home for the night at Mae Kampong

Flight of the Gibbon

Eco-tourism at Mae Kampong has been helped by the ziplining company, Flight of the Gibbon. The adventure activity brings tourists to the area who might not ever visit. In addition to enjoying the thrill of ziplining, tourists also have the option to enjoy a homestay and experience the local way of life and traditional Lanna hospitality to be found in Mae Kampong.

Flight of the Gibbon employ a respected international scientist, Demis Galli, as Director of Conservation. The work of Demis and his team has helped make Mae Kampong a role-model for sustainable eco-tourism in Thailand. Villagers have been able to maintain old traditions, but also explore new sources of income to safeguard the future of the village and protect the forests. The modern-day residents of Mae Kampong still collect bamboo and medicinal plants and herbs from the forest just as their ancestors did, but these days the focus is on sustainability.

I don’t have to leave the mountain. The village provides me with everything I need. Life is good
– Khun Somboon 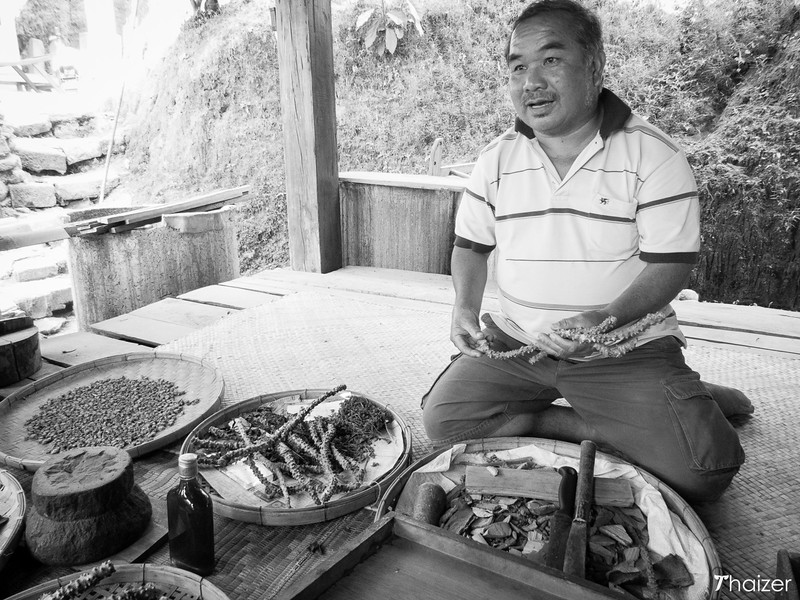 And the villagers still harvest tea the traditional way, but the tea isn’t just being used to make mieng. Dried leaves are used to make aromatherapy tea-pillows with plans to extend the range further. The team from Flight of the Gibbon are working with villagers and Chiang Mai University to develop more aromatherapy products using local herbs and flowers found in Mae Kampong.

Baan Mae Kampong is made up of three small villages: Mae Kampong Nok, Mae Kampong Glang, and Mae Kampong Nai. The word ‘kampong‘ comes from the local mountain flower, ‘dok kampong‘ that grows beside the stream that runs through the village.

Booking a homestay at Mae Kampong

Most of the tourists at the Mae Kampong homestay are Thai, but overseas tourists are welcome. You can make enquiries directly with the community at Mae Kampong*, but this should be done by somebody who speaks Thai (or the northern Thai language).

Update: January 2017
*The Mae Kampong website is no longer being maintained. If you want to make a booking you can use this link or contact any tour office in Chiang Mai.

The Mae Kampong Homestay works as a co-operative with a proportion of income being retained by participating hosts and the remainder going to the local community. Other alternatives in Mae Kampong for a homestay experience include John’s House and April Cottage Resort. Please note these latter two options aren’t part of the community co-operative and prices are higher than those listed above.

Visitors of all nationalities will be made very welcome, but little English is spoken by most of the villagers. Temperatures at night and in the morning can be cold so be prepared with the right clothing. Insect repellant can also be useful and if you’re going on a hike, suitable shoes or trainers.

How to get to Mae Kampong

Mae Kampong is located in Mae On district approximately 50kms east of Chiang Mai city. If you have your own transport, you could combine a trip to the village with a visit to Mae On Cave and Sankampaeng for the hot-springs and handicraft shopping.

I was a guest of Flight of the Gibbon for my trip to Mae Kampong.

Bangkok Prepares for 1,600 Pandas World Tour
Next Post:Mai Pen Rai Means Never Mind. Or Does It?