Pattaya’s U-Tapao airport is to get more flights as two domestic airlines, Kan Air and Air Asia, expand their operations in Thailand. And with the introduction of the new flights, promotions are being offered with prices as low as 590 Baht on Air Asia and 990 Baht on *Kan Air.

Update 2017:
*Kan Air suspended all their services in the first half of 2017
U-Tapao airport
U-Tapao (airport code UTP) started life as a military airport and is still owned by the navy. Whilst the airport still sees military flights, U-Tapao is increasingly being used for commercial services. To cope with the increase in passenger numbers, a new airport terminal is scheduled to open at U-Tapao in June 2016.

Although U-Tapao airport is marketed as Pattaya’s airport, it is located close to Sattahip in Rayong province. The airport is approximately 50 km (31 miles) to the south-east of Pattaya. A shared mini-bus from U-Tapao to Pattaya is approximately 250 Baht with a private taxi at least 600 Baht. Journey time between U-Tapao and Pattaya is around 45 minutes.

Air Asia recently announced its first domestic route from U-Tapao connecting to Udon Thani in northeast Thailand. On 27 November, the low-cost carrier will start a new daily direct service between Pattaya U-Tapao and Chiang Mai. And on November 29, Air Asia launches a thrice-weekly service between U-Tapao and Hat Yai in southern Thailand. Services will use a 180-seat Airbus A320 aircraft.

The domestic flights will complement Air Asia’s international services with Pattaya U-Tapao already connecting with Nanning and Nanchang in China and Kuala Lumpur in Malaysia. Services are also due to be launched later this year to connect U-Tapao with Macau and Singapore.
Air Asia website 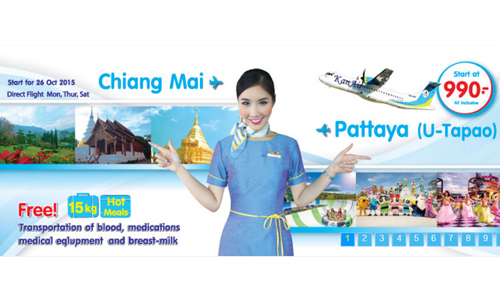 Update 2017:
Kan Air suspended all their services in the first half of 2017
Category: Travel in ThailandTag: Pattaya
Powered by 12Go system