Mosquitoes are a part of life in Thailand. Some people suffer more than others from mosquito bites, but there are a few simple steps you can take to lessen the chances of being bitten. Whilst the risk of getting malaria is low, mosquitoes can also carry dengue fever and Japanese encephalitis. The first line of defence is to try and avoid getting bitten.

Mosquitoes tend to be most active at sunrise and dusk and are particularly attracted to people wearing aftershave, perfume or scented deodorants, so bear that in mind if you are preparing for a night out. Simply wearing long trousers as opposed to shorts or a skirt can greatly reduce the chances of being bitten. Wearing light-coloured clothing is supposed to help as mosquitoes are apparently more attracted to dark colours. Air-conditioning also helps to deter mozzies, who dislike the cooler temperatures.

General consensus seems to be that DEET is the most effective product to prevent bites, but it can be strong stuff and you have to be careful about the concentration used. Some guide books advise using DEET and buying DEET-based products from your own country. From personal experience I’m not convinced that is necessary, but having said that I’m no expert.

For me, the locally available insect repellents work well. In Thailand, every pharmacy, supermarket and local 7/11 store carry an excellent range of cheap mosquito and insect repellents. I find that the citronella-based products are very effective in preventing mosquito bites. It is also possible to purchase a whole range of other repellents which range from coils and plug-in adapters to mini tennis racquet-style bats which ‘zap’ the mosquitoes; a good opportunity for any budding Roger Federer’s or Paradorn Srichipan’s to practice their forehand volleys on the mozzies. 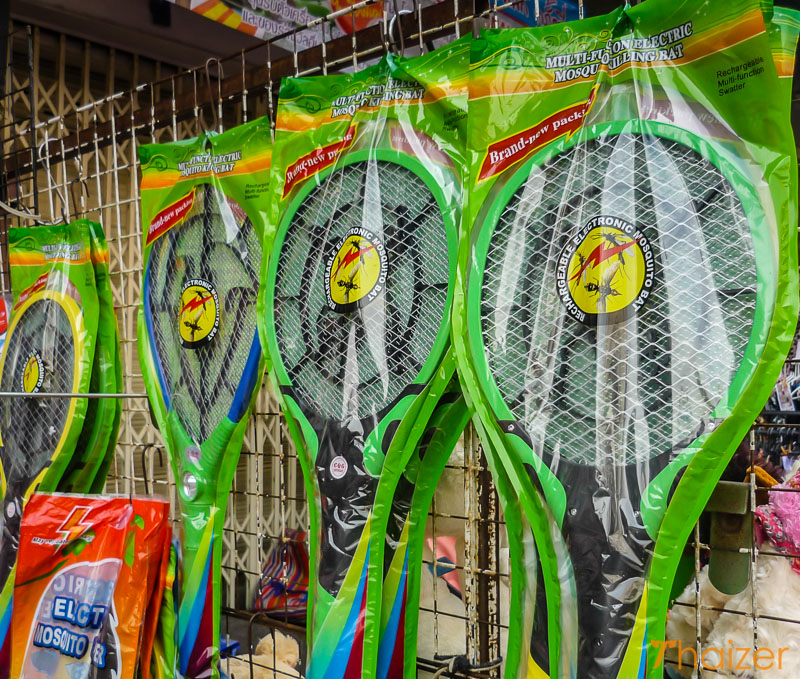 With just about any insect bite, the temptation is to scratch the area affected. By doing so, this releases the histamine and can make the bite worse leading to angry red marks and blotches in the affected area. Avoid the temptation to scratch any bites and apply some Tiger Balm which is extremely effective for insect bites.

Most bites are minor irritations, but if you do suffer any abnormal swelling or bruising you should seek medical advice. Pharmacies are an excellent point of first contact in such instances.

I wouldn’t bother bringing a mosquito net with you unless you are intending to spend a lot of time sleeping outside or in very rustic accommodation. Even then, nets can be bought cheaply from many department stores in Bangkok and other main towns and cities.

Outside of a few remote areas, malaria is not an issue in Thailand. Some health practitioners in your homeland may try and convince you to buy a course of anti-malaria tablets. I’m no medical expert and I wouldn’t normally disagree with medical advice, but be wary if your health advisor insists you buy an expensive course of anti-malaria tablets. Drug companies make a large profit on these and it is debatable how effective they are. If you do want to buy them they can be bought at a fraction of the cost in Thailand. Like I say, I’m no medical expert, but it’s something to be wary of.

Some mosquitoes can carry dengue fever and this can be more of an issue during the rainy season. Most good guest-houses and hotels will carry out anti-mosquito spraying.

There have been recent outbreaks in some Thai towns along the Burmese border which have been attributed to immigrant Burmese workers infected with the disease. Singapore is also suffering at the moment from a number of cases of dengue fever.

As with malaria, this is only really a potential problem in certain rural areas. I have written an article on the risk of Japanese encephalitis in Thailand.

Motorcycles – What to Watch Out for When Hiring a Motorbike in Thailand
Next Post: Visiting Thai Temples