In common with other areas of Asia, Thailand has a long tradition of storytelling using shadow puppets. The content of the stories and the figures used by puppeteers vary depending on the region of Thailand. For example, in the north-east region of Isaan the puppets are known as ‘pramotai‘ and usually depict stories from the Ramakien story. In the south of Thailand, the shadow puppet performances also combine influences from Malaysia and Thai Muslim traditions. And it is in the south of Thailand where National Artist, Suchart Subsin, has played a pivotal role in preserving this ancient performing art. Suchart’s traditional wooden house in his home city of Nakhon Si Thammarat is now a museum dedicated to his lifelong passion for shadow puppets. Ban Suchart Subsin is also a venue where visitors can see southern Thai shadow puppet performances, known as ‘nang talung‘, performed by members of Suchart’s family. 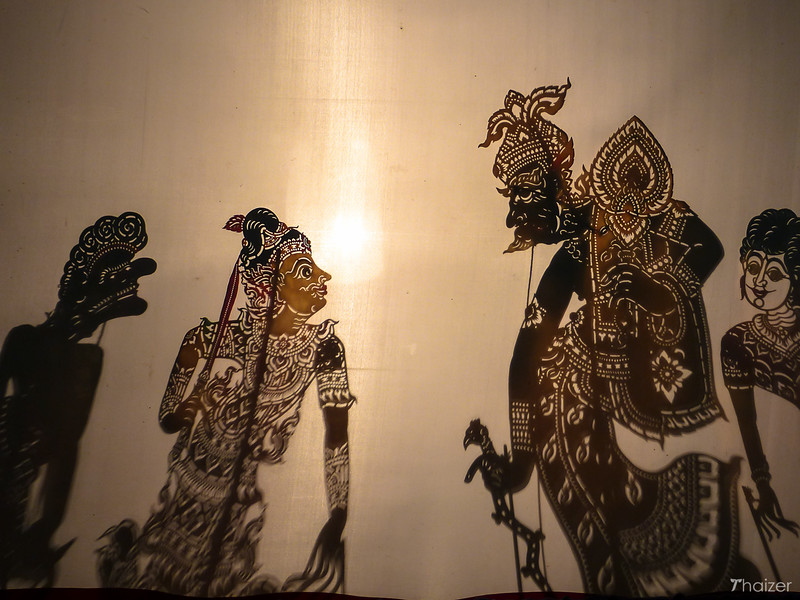 The shadow puppets are flat in shape and hand-crafted from leather. The puppeteer sits behind a thin white curtain with a light behind him projecting the shadow of the puppet for the audience to see. Originally, an oil lamp was used but a simple electric bulb is the norm these days. Lightweight wooden or bamboo struts are used to carefully control the movements of the puppets which appear to walk, dance and speak. The puppeteer narrates the story from behind the screen and voices each of the different characters. A separate person or group of people play the musical instruments that add to the drama and fun of the performance. In ‘nang talung‘ performances at Ban Suchart Subsin the humour can be bawdy and some of the tales of morals and values have been given a clever contemporary twist to keep them relevant to a new generation. Amongst the traditional tales of love and morality, some of the stories use motorbikes and mobile phones. The museum at the home of Suchart Subsin was founded in 1987 by Suchart and his family. The Subsin family have collected shadow puppets from various regions of Thailand and some other countries including China, Cambodia and India. The award-winning museum has won local and international praise for its role in education and preserving ancient folk arts. Local students regularly visit the museum which has become a source of great pride to the people of Nakhon Si Thammarat. Characters from the nang talung plays have become synonymous with the city and depictions of them can be seen in various locations around Nakhon Si Thammarat and on souvenirs from the area. Visitors to the shadow puppet museum can go inside the workshop to see all aspects involved in making the figures which includes designing and cutting out the patterns, tanning the leather and painting the puppets. Please remember to take off your shoes when you go inside the museum and shop. Born in Nakhon Si Thammarat in 1938, Suchart Subsin began drawing images of shadow puppets at an early age. His father encouraged his son’s talent and made arrangements for him to study under the watchful eye of a master shadow puppet maker and poet. By the time he was 14, Suchart was a professional shadow-play artist. His natural ability and devotion to his art led him to write poetry for the shadow plays as well as design the puppet figures.

In 2006, Suchart was awarded the title of National Artist in the Performing Arts (Folk Performances). Suchart is in his senior years now, but he has passed on his considerable expertise and knowledge to his family and students who continue to conserve, promote and teach this traditional performing art. The motto of the shadow puppet museum perfectly sums up Suchart:

If you work just for yourself, life is bleak. If you are truly dedicated, you will be remembered even after you are long gone.

How to get to the shadow puppet museum

The museum and home of Suchart Subsin is located in Nakhon Si Thammarat city centre (see this page for map). The full address is:

The museum is open daily, but it is advisable to call in advance to let them know you are coming so that they can prepare the shadow puppet performance. In most cases, your hotel or guest-house will be happy to call Ban Suchart Subsin on your behalf and also make arrangements for transport if needed. There is a nominal fee of 50 Baht per person to watch the shadow puppet play.

A visit to the Nang Talung Museum at Ban Suchart Subsin is a real treat and is highly recommended if you are in Nakhon Si Thammarat. Although the museum is a tourist attraction, it doesn’t have that feel to it because it is still somebody’s home and provides a fascinating insight into a unique aspect of Thai culture in this charming part of southern Thailand.