You are here: Home / News / Advice for Tourists: What to Wear in Thailand During the Mourning Period

Many people preparing a trip to Thailand may be confused about what to wear following the death of the King. There has been some misleading coverage and statements from international media about the subject. I’m in Thailand now and want to clarify what is happening here and how it affects tourists. I also want to stress again that Thailand hasn’t come to a standstill. Bars and restaurants are open. Alcohol is being served. Transport is all running normally, shopping malls and tourist attractions are open (except for the Grand Palace and Temple of the Emerald Buddha in Bangkok) and life goes on.

Thailand remains as welcoming as ever to visitors and there is no need to cancel or amend travel plans. It is a sad time for Thai people, but they also have to continue to work and make a living. The tourism industry is an important part of the Thai economy and the Thai people I’ve spoken have been keen to say that they don’t want visitors to cancel or amend their travel plans. They want tourists to continue to visit and enjoy Thailand. At the same time, please don’t underestimate how sad many Thai people are about the loss of their King. By showing some discretion about what you wear you will win respect from your Thai hosts. 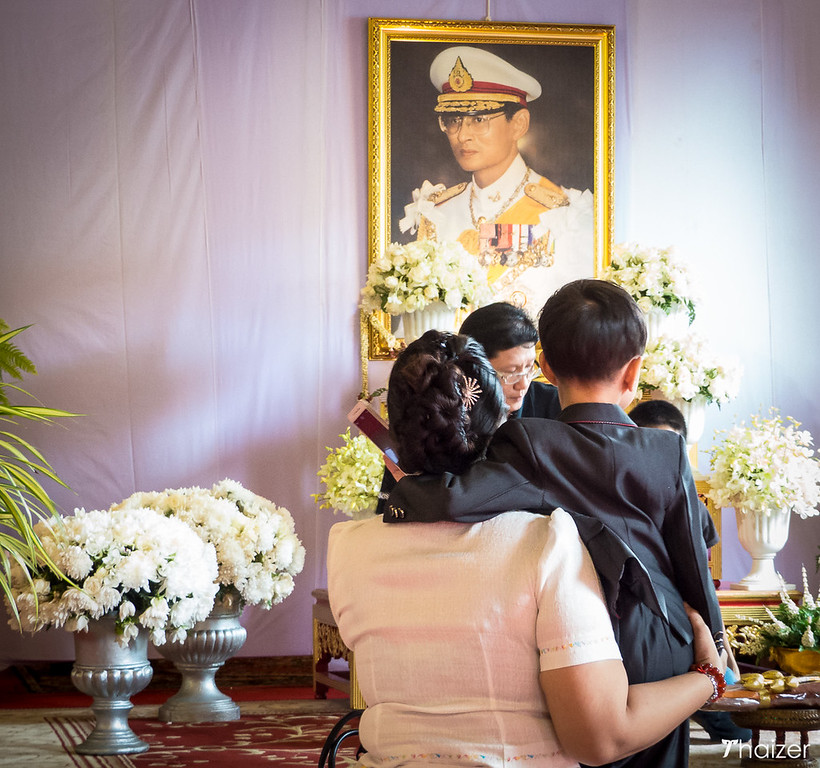 grandmother and grandson pay their respects to the King at Wat Phra Singh, Chiang Mai

The mourning period in Thailand

There are two mourning periods in place in Thailand. The initial 30-day period after the King’s death is when flags are being flown at half-mast and it is during this four-week period that ordinary Thai people are requested to be particularly respectful. The second, extended period of mourning applies to state officials and government employees who will be required to wear black for a year. It probably won’t be until late in 2017 when the cremation ceremony for the King takes place.

The initial 30-day mourning period (up until November 13 and 14) is the time when visitors to Thailand should be especially considerate about what they wear. As a visitor to Thailand you don’t have to wear black or white and you aren’t expected to go to the same lengths as the local people. But as a guest in the country there are some simple ways to show respect that will be appreciated by locals. Detailed below is the advice I would give my own family and friends if they were visiting Thailand from now up until November 14.

What should I wear to show respect for the King?

The most practical way for overseas visitors to show respect for the King is to wear a simple black ribbon. In the last few days, I’ve noticed that this is something that more and more Thai people themselves are starting to do, so you won’t be alone. Some hotels in Thailand are handing out black ribbons to guests and some local authorities are doing a similar thing. In Chiang Mai yesterday, local officials and volunteers were handing out black ribbons to locals and tourists at various locations around the Old City. The lady I spoke to proudly said she was doing this “for my king”. She also said the recommended place to wear the ribbon is on the upper part of your left sleeve. You can wear it over your chest, but you will notice that most Thais are wearing their black ribbons on their left arm and that is where I’m wearing mine too. 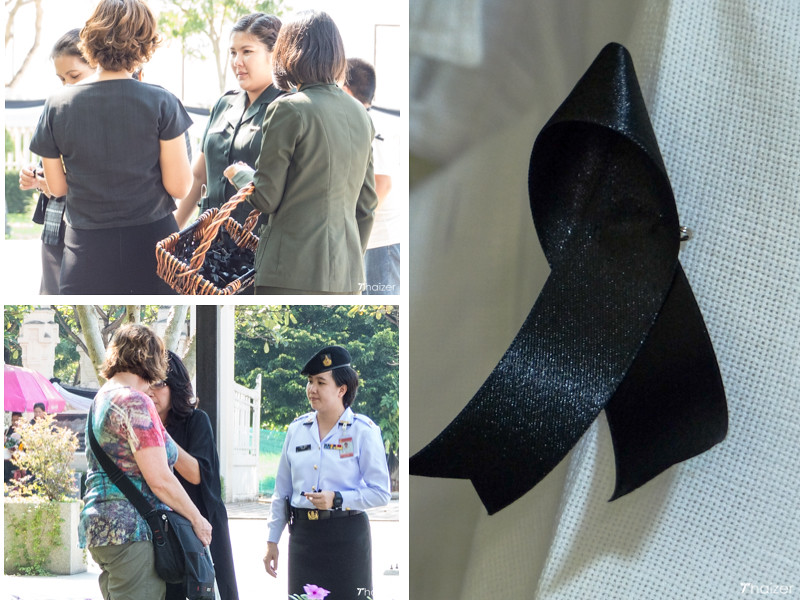 If you can find a black ribbon at home before you arrive that would be ideal because depending on where you travel to in Thailand they might not be available. There has been talk of some airlines that fly to Bangkok offering black ribbons to passengers, but that may take some time to arrange and isn’t definite. There is also talk of black ribbons being made available at the immigration desks when visitors arrive at Bangkok Suvarnabhumi airport. It’s a lovely idea, but given the sheer number of visitors each day at Bangkok airport and the practicalities involved in producing so many ribbons at such short notice, it may prove difficult to implement.

If you can’t find a black ribbon, try to wear tops that aren’t too bright or ‘flashy’. White is ideal and suitable for the tropical climate, but neutral or dark colours are all fine too. Leave the luminous orange t-shirts at home. The Singha beer vests favoured by backpackers and men of a certain age are OK for the beach, but not a good look in the city.

What to wear in Bangkok

With the King’s body resting in Bangkok, it’s appropriate to be extra considerate in the Thai capital. As a tourist you won’t be expected to wear just black or white tops for the duration of your trip, but muted colours would be appreciated. Bangkok will see an influx of Thai tourists over the coming weeks with people travelling to the Grand Palace to sign condolence books and pay their respects to a man who was loved by many as the ‘Father of the Nation’. If you are visiting the Grand Palace area, even if it’s just outside, please be tactful. Wear a black top or a plain white top with a black ribbon if possible.

What to wear in Chiang Mai and other cities

Wearing plain white or muted colours is appreciated whichever city you are travelling to in Thailand during the next three or four weeks. I can personally vouch for the fact that wearing a black ribbon on your shirt sleeve will gain you a lot of respect. I have to say I’ve been impressed by many of the tourists I’ve seen in Chiang Mai in recent days. Not everybody has got the message, but from what I’ve seen when I’ve been out and about this week, the majority have. It’s been lovely to hear so many positive comments from locals talking about tourists having a ‘Thai heart’.

No matter how hot or humid it is in any Thai city, don’t dress for the beach. Men shouldn’t be going shirtless. That has always been the case in metropolitan areas, but even more so now during the period of mourning. 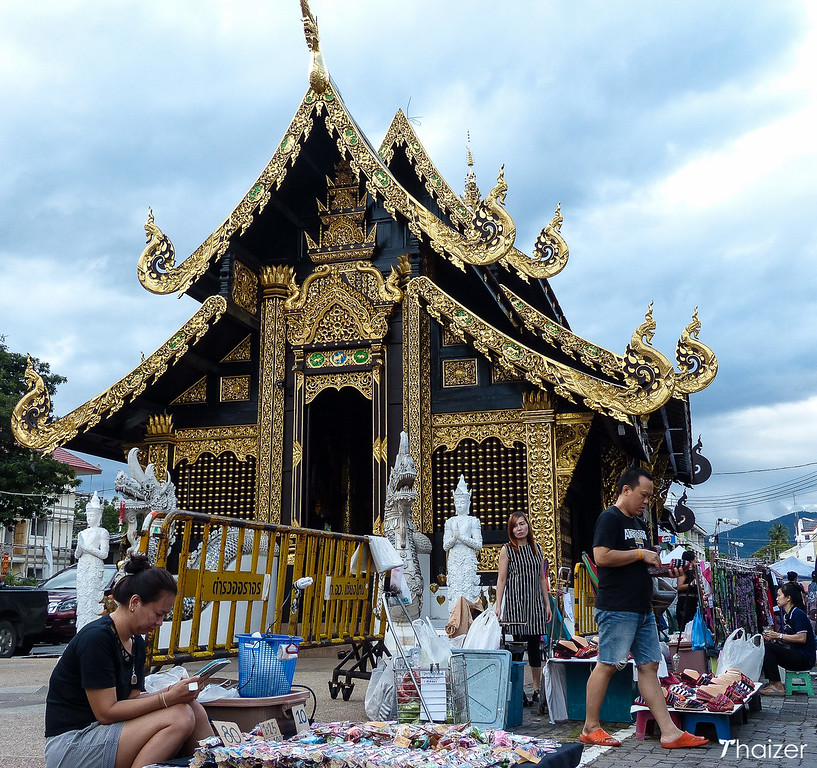 What to wear on the islands and beaches in Thailand

On the beach, the simple advice is to wear what you normally would. Don’t sunbathe nude (which has never been polite in Thailand) and use some common sense when you are away from the beach. Many Thai islands and beach resorts are heavily reliant on tourism so there is likely to be plenty of leeway compared to if you are in a city like Bangkok or Chiang Mai. Despite that, visitors should still be sensitive to the fact that many restaurant owners, hotel staff and store owners will be quietly mourning their King. When you go out in the evening wearing a black ribbon or muted colours would be appreciated, but not demanded. To a certain extent, follow the lead of the Thai people around you and assess the mood. It may vary from location to location so use your own judgement. If you are hopping on a songthaew or bus in a beach resort, don’t do so wearing just your swimwear. Not that anybody ever should, but it does happen. Thai people might not say anything but it is disrespectful at the best of times and would be particularly ignorant under the current circumstances.

The most important thing for young children is to be comfortable in the heat. There is no need to make any changes to what you are planning to pack for younger children. For older children and teenagers, try to explain why Thai people are wearing black tops or black ribbons. If older children want to wear black ribbons too, it will reflect positively on you as a parent and won’t go unnoticed by appreciative locals.

What will Thai people be wearing during the mourning period?

Many Thais will be wearing black out of respect for a man they loved and who was a constant in their life. Most I’ve spoken to say they intend to wear black tops for the first 30 days after the King’s death on October 13. Others have said although they want to wear a black shirt or dress for a month, it simply isn’t practical because they either don’t have enough suitable items already in their wardrobe or they can’t buy new ones. Since the passing of the King there has been a huge demand for black clothing in Thailand. This has led to some markets and wholesalers selling out of black fabric and others raising prices on shirts and tops despite stern warnings from the government not to exploit the situation.

black shirts with the Thai number 9 in honour of King Rama IX, the ninth king of the Chakri Dynasty

Grey and white are also much in evidence. Since the beginning of this week, there has been a noticeable increase in the number of Thai people wearing black ribbons on their sleeve. I sense that this is a trend that will continue. It’s a practical day-to-day alternative to wearing black shirts or black dresses in the heat of Thailand.

It must also be said that not every Thai person is wearing sombre colours or black ribbons. It does stand out though to see the occasional Thai person in a bright shirt or a football jersey. Sadly, there have been some incidents of public ‘shaming’ on social media with over-zealous netizens accusing some fellow Thais of not showing sufficient respect. This demonstrates how sensitive some Thai people are in the immediate aftermath of the King’s death. Tourists are advised to avoid discussions about the King or the Thai monarchy.

In the countryside, there are fewer people wearing black compared to the city. That doesn’t mean that rural folks don’t respect the King as much as those in urban areas, but wearing black as a farmer is obviously a very different proposition to wearing black in an air-conditioned office or shop in the city.

The more time passes after the King’s death, the more people will slowly begin to wear what they normally would. From the second half of November onwards, the wearing of black in Thailand will be less noticeable. However, there will be some who wear black for a year. Government officials will be amongst those wearing black for a period of one year. If you need to visit an immigration office in that time, dressing respectfully and wearing a plain white or black top would be a classy thing to do.

During the months ahead there is likely to be an increase in Thai tourists visiting attractions and locations with a connection to the King. This includes destinations such as Bhuping Palace in Chiang Mai. There are already existing guidelines in place about what you can and can’t wear at these locations, but wearing a black or white top would be particularly respectful.

Please also read:
Thailand in mourning: general advice for tourists
What is happening to festivals and events?
Will bars and clubs still be open?