This Sunday, September 22, is World Car Free Day and as part of that initiative the Bangkok Metropolitan Authority (BMA) is encouraging those living in the Thai capital to use the city’s pubic transport network and leave their cars at home for the day. Although cars are still going to be seen on the streets of Bangkok on Sunday, there are some roads in the vicinity of the Grand Palace and Sanam Luang which will be completely off-limits to motor vehicles with cyclists being encouraged to take to the streets. Local cycling groups will be meeting at dawn at dozens of different meeting points in and around the the city before converging on Sanam Luang in time for the opening ceremony of the Bangkok Car Free Day at 08.00. It is anticipated that more than 20,000 cyclists will take part in the event with many wearing a top with one colour of the Thai flag; red, white or blue. The cyclists will then take their positions to form a massive Thai flag before riding into the central shopping area at Ratchaprasong (close to Siam Square) with some lanes on city centre roads being reserved for cyclists. As part of World Car Free Day, other cycling events are also being held in different towns and cities around Thailand, but Bangkok will host the largest event of the day. 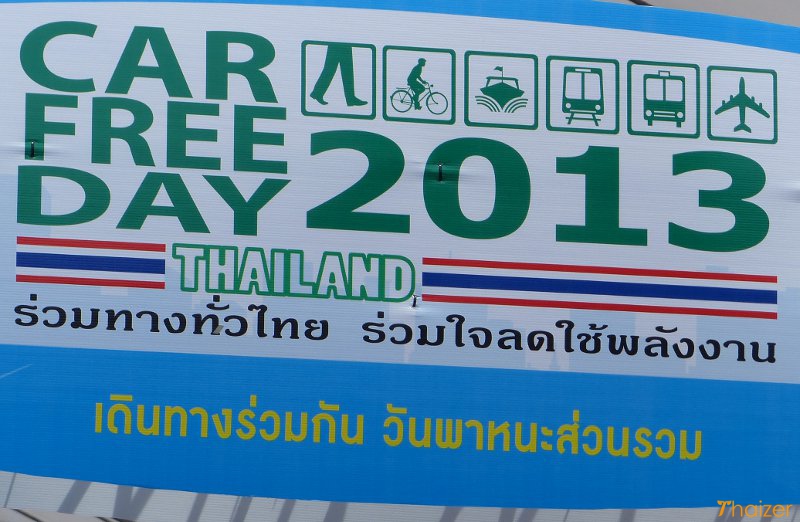 Residents and visitors to Bangkok are able to take advantage of concessions on public transport for the day. Buying one of the special blue pins priced at 50 Baht will enable visitors to use all forms of public transport in Bangkok for no additional charge including the Skytrain, metro, airport rail link and Chao Phraya Express Boats. The blue pins can be purchased at a number of BMA outlets and Skytrain stations including Chatuchak, Siam and Phrom Phong and are valid from 06.00 to midnight on September 22. BMA will donate 100% of the proceeds from the pins to charity.

View my photos from the Bangkok Car Free Day »