It’s all set to be panda-monium in Bangkok during March with flash mobs popping up all over the city. Fortunately, it has nothing to do with politics or protests. Instead, the Thai capital is preparing for a cuteness overload and a barrage of photo opportunities as a unique art exhibition and wildlife campaign touches down in Bangkok. At least 1,600 papier-mache models of giant pandas will form ‘flash mobs’ at various locations around the Thai capital. Ranging in height from 11 to 29 centimetres, the pandas are crafted from recycled materials and decorated with eco-friendly paint as part of the 1,600 Pandas World Tour. When the project started back in 2008 there were an estimated 1,600 giant pandas left in the wild. That figure was included in the title of the Panda World Tour to provide a stark reminder of just how close to extinction the giant panda is. 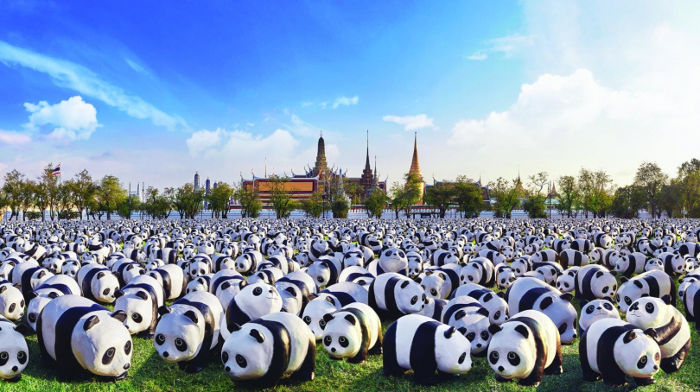 artist’s impression of the pandas in front of the Grand Palace at Sanam Luang, Bangkok

Since 2008, the 1,600 Pandas World Tour has made stops in 20 countries. The panda flash mobs are part of a global art project that aims to raise awareness for panda conservation. The Thailand exhibition has been organised by French artist Paulo Grangeon and World Wildlife Foundation (WWF) Thailand.

1,600 Pandas Plus Thailand
In the years since the project started in 2008, the number of giant pandas living in the wild in China has increased. Recent surveys put the figure at 1,864 pandas. This rise in numbers is acknowledged by the ‘Plus’ added to the tour’s title for the Thailand exhibition.

Where to see the pandas in Bangkok

Keep an eye out for the panda flash mobs at the following locations in Bangkok: 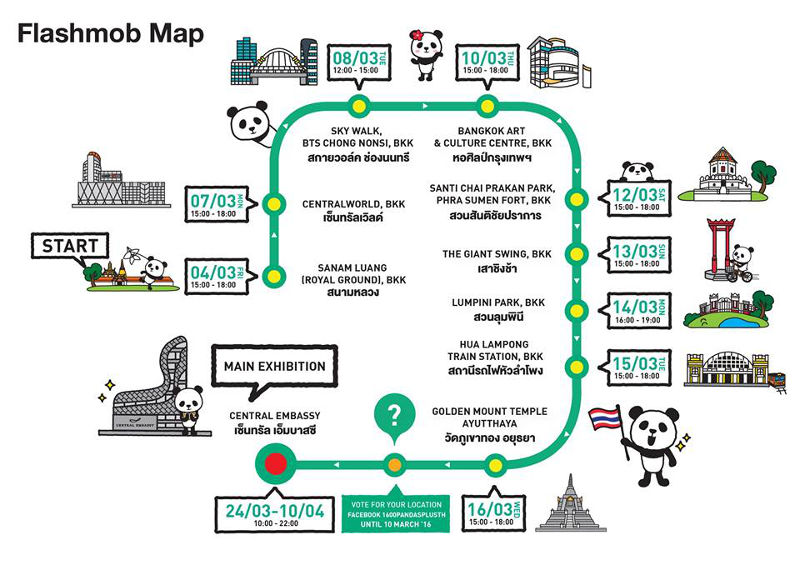 See Google map at bottom of page for more details

French artist Paulo Grangeon was a wood sculptor for 30 years, but discovered the advantages of papier-mache while visiting Thailand in the late 1990s. The material is flexible, lightweight and strong and also recycles paper. Grangeon developed a technique for mass-producing papier-mache figurines and also created the original panda model. Using small factories in Thailand, the Frenchman has helped make more than 10,000 models for the various 1,600 Pandas World Tours.

After the exhibition at Central Embassy in Bangkok closes in April, all of the panda models will be up for ‘adoption’ (the term the artist prefers to use instead of sale). The money raised will help WWF Thailand protect elephants, tigers and other vulnerable species. Director of WWF Thailand, Yowalak Thiarachow, says fewer than 3,000 elephants and only 200 tigers are left in the wild in Thailand. The 1,600 Pandas World Tour art project has raised more than 300,000 USD for WWF since 2008.

Panda lovers can register their interest in adopting a panda by visiting www.1600PandasPlusth.com between March 10-12. The price of a large standing, sitting, reclining or hanging panda is expected to be 1,600 Baht. A medium version is 1,200 Baht and a small panda is up for adoption for 800 Baht.

images used here are from the 1,600 Pandas Plus Thailand Facebook page