You are here: Home / News / Bangkok Ready for Motor Sport Race of Champions

A treat is in store for motor racing fans in Bangkok this weekend with the prestigious Race of Champions event taking place in the Thai capital. Featuring drivers form Formula 1, Le Mans, IndyCar, world rally and touring cars, this will only be the second time the Race of Champions has been held outside of Europe since it first began 25 years ago. Amongst the famous names competing in Bangkok over the next few days are Sebastian Vettel, Jenson Button, Michael Scumacher, Jorge Lorenzo and Mick Doohan. The race weekend is taking place at a specially built track at Bangkok’s Rajamangala Stadium where drivers will compete against each other in identical cars to make it a level playing field for all drivers. 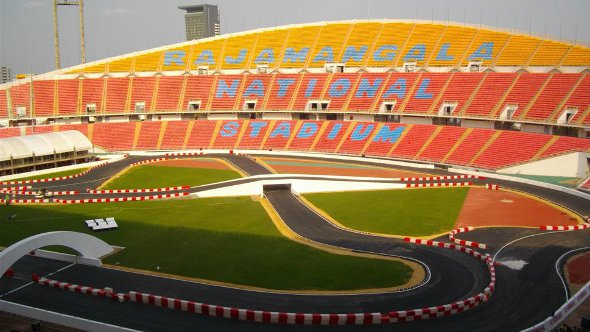 As well as the races there will be music concerts, exhibitions and stunt displays. Major sponsors of the Bangkok event include Red Bull and Singha Beer and organisers will be hoping all goes smoothly with Thailand hoping to impress world media and Formula 1 onlookers with Bangkok previously announcing ambitious plans to host an F1 race in 2014. The Race of Champions will be the biggest showcase for motor sport in Thailand since 2010 when Mark Webber drove his Formula 1 Red Bull car in a demonstration event on the streets of Bangkok that was watched by more than 100,000 people.

Proceedings begin tomorrow with more races on Saturday before culminating in the individual Race of Champions event on Sunday. If you are in Bangkok over the next few days and are interested in attending, tickets are still available (price starting from 200 Baht). See the link below for more details:
Race of Champions website »