One of Chiang Mai’s most famous residents, Lin Ping the giant panda, is set to leave her home in northern Thailand next month. Lin Ping is the cub of two giant pandas, Xuang Xuang and Lin Hui, which were loaned to Thailand from China back in 2003. The terms of that agreement stipulated that any cubs born to the pair would be sent to China when they reached the age of four years old. Born amidst a flurry of media excitement in 2009, Lin Ping reaches her fourth birthday on May 27. Although it looks like Lin Ping will be leaving Thailand soon, there is a good chance her parents will remain at their home at Chiang Mai zoo. The initial 10-year loan period for Lin Ping’s parents ends in October 2013, but it is thought that China will agree to allow Xuang Xuang and Lin Hui to remain in Thailand for a while longer. 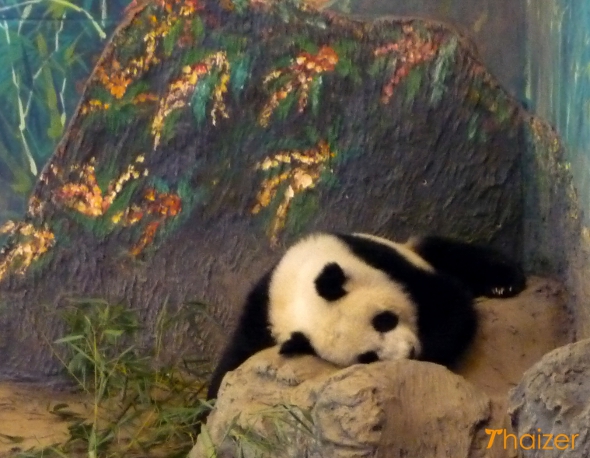 The authorities in Thailand have tried to negotiate an extension of stay for Lin Ping, but now accept that her departure to China is inevitable. To help the youngster prepare for her new life in the cooler climes of Chengdu, Lin Ping is spending extended visits in the specially constructed snow-dome in her current living quarters at Chiang Mai zoo. Meanwhile, Thai Airways International are working on the transportation arrangements for Lin Ping’s journey to China whilst Chiang Mai zoo aim to host a farewell party the week before Lin Ping leaves for her new home in Chengdu.

Update May 13, 2013:
A new agreement has now been reached between Thailand and China allowing for Lin Ping to stay in Chiang Mai.
Read more here Â»