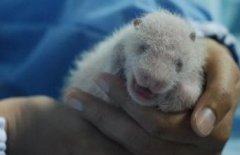 The panda cub born at Chiang Mai zoo in northern Thailand is now one month old and the public interest in the new arrival remains intense. Pictures and coverage of the baby panda’s development regularly appear in the Thai media and provide a happy distraction from the economic and political problems of the country. Chiang Mai in particular has been affected by the downturn in Thailand which has seen a sharp reduction in domestic and international tourists. The first half of this year has seen a reported 20% fall in visitors to Chiang Mai compared to last year. Hotels have also been pointing to low occupancy rates. 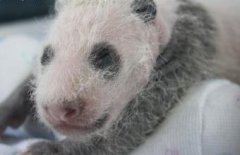 Tourist officials are hopeful that the panda cub can revive Chiang Mai’s fortunes. Special ‘welcome baby panda’ parades are being organized for July 4-6 with marching bands from local schools performing. A nationwide competition has also been held to name the new arrival with the announcement to be made at a ceremony in Bangkok in mid-August. A traditional Lanna northern Thai blessing is scheduled for the panda cub who will also feature on limited edition car number plates which will go up for auction in November. Chiang Mai’s new celebrity panda family will even have their own multi-million Baht snow home to live in later in the year. The snow house will feature Chinese-style surrounds including a representation of the Great Wall of China. Meanwhile, traders in Chiang Mai and Chiang Rai are reporting booming sales for any panda-related products.

The cub is the offspring of giant pandas Lin Hui and Xuang Xuang (also written as Chuang Chuang) who were loaned by China to Thailand in 2003 in a 10 year loan agreement. 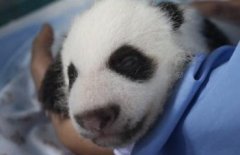 Under the terms of the agreement, any cub born must be returned to China within 2 years of its birth. Local reports suggest that Thailand’s prime minister, Abhisit Vejjajiva, is to seek an extension of stay for the panda cub when he meets with Chinese officials.

The cub is still too young to be put on public display, but at the weekend a select group of people who shared the same birthday as the cub were allowed a special preview. For regular visitors to Chiang Mai zoo, more CCTV cameras have been installed to keep up with the demand for footage of the mother, Lin Hui, caring for her baby.

Photos on this page are certainly narak mak ma (very cute) and come from Chiang Mai zoo showing the gradual change in the panda cub from pink to black and white.