Black and white mourning bunting remains in place outside schools and government buildings, but Thai flags were raised from half-mast to full-mast on November 14 to mark the end of the initial 30-day mourning period for the late King. Bars and clubs have been allowed to return to normal operating hours and live music is being played again in entertainment venues. Soap operas and light entertainment shows have returned to the television screens and sporting fixtures have resumed.

Do visitors need to wear black?

I’ve worn black shirts or white with a black ribbon for the past month, but returned to normal attire after the 30-day mourning period passed earlier this week and flags were raised to full-mast. Walking around today in Chiang Mai it is noticeable that fewer Thai people are now wearing black or black ribbons. However, there are still many people who are wearing black and some Thai friends and vendors I’ve spoken to said they plan to wear a black ribbon for a year. There has been no requirement for tourists to wear black during the initial mourning period, but those that have done so or who have worn black ribbons have been positively received by Thais. 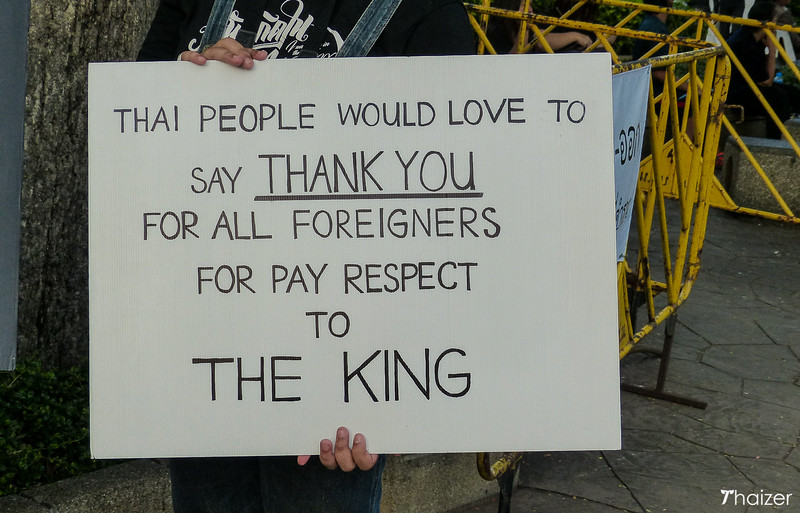 sign held by volunteer outside the Grand Palace, Bangkok

Now that the initial 30-day mourning period is over visitors to Thailand shouldn’t worry about wearing black. But there is one venue where, in my opinion, visitors should still wear black or a white top with a black ribbon. And that venue is the Grand Palace in Bangkok where the King’s body is lying in state as funeral rites continue. The Royal Cremation Ceremony isn’t expected to take place until late 2017. Hundreds of thousands of Thais from all parts of the country have visited the Grand Palace since the King’s death. That number will rise into the millions in the weeks and months ahead as people from all corners of Thailand travel to Bangkok to pay homage to their King. Many have queued for hours to pay their respects and almost all have worn black. As a mark of respect to the Thai people as well as the King, I would encourage all visitors to the Grand Palace between now and the cremation ceremony to wear a black top or white top with a black ribbon when visiting. 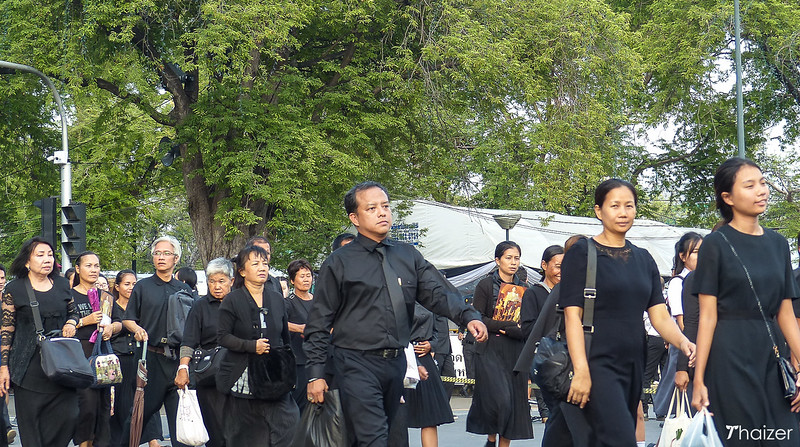 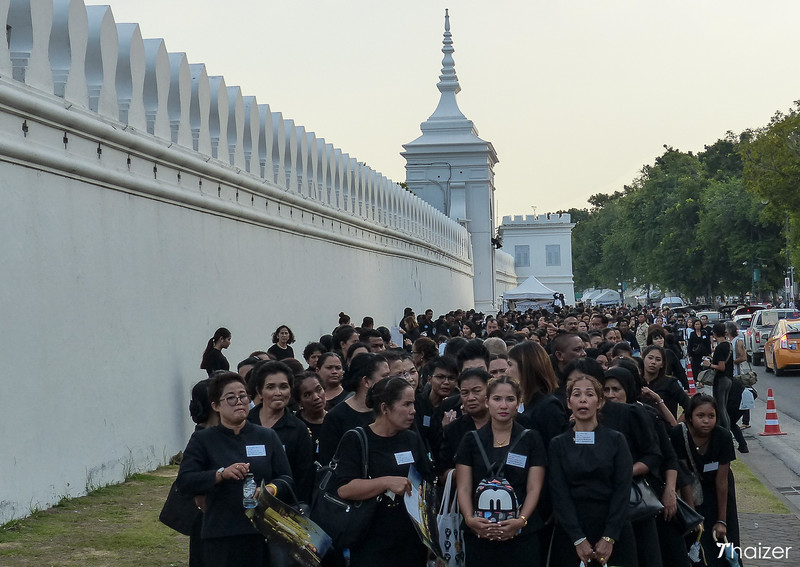 The official mourning period for the King will last for a year, but this extended period applies to government officials and state events. The first 30 days were the most significant in terms of potential impact on tourists. Mr. Yuthasak Supasorn, Governor of the Tourism Authority of Thailand (TAT) said, “The first 30 days of the official mourning period has been the time for the Thai people in remembrance to the late King. Although there has been earlier minimal disruption to events, festivals and tourism activities, with entertainment restrictions being lifted this week, visitors can feel assured that they will spend their time here, experience a warm welcome and continue with their holiday plans.”

The comments of the TAT Governor certainly echo my experience during a month where I’ve travelled around Thailand and spent time in Bangkok, Hua Hin, Chiang Mai, Phitsanulok and Sukhothai. Although there has been sadness, there have been plenty of smiles and laughter as life goes on. It is a historic time to be in Thailand and has been both fascinating and a privilege to witness how Thais have reacted to such a significant event.

life is going on in the country and the people are as welcoming as ever to tourists.

There are still some events which could be toned down over the next few months including firework displays that often form a part of New Year Countdown celebrations. That could change though and will depend on how various local authorities decide what is or isn’t appropriate. The main point though is that Thailand remains welcoming to visitors. The TAT Governor added, “While this is the mourning period in Thailand, life is going on in the country and the people are as welcoming as ever to tourists. All events and celebrations are going ahead and tourists will be seen as true friends of Thailand in these eventful times.”