These are historic times in Thailand, but life goes on. There is no need for tourists to cancel or amend travel plans. Visitors should show respect for the Thai people and should not underestimate just how much their King means to them. But that doesn’t mean you can’t enjoy your time in Thailand. Thai people still want tourists to visit and enjoy their trip. Tourism remains an important part of the economy and there are many people in Thailand who rely on income generated from tourism.

I’m sure that most visitors want to show respect for the King and the Thai people. At the same time, it’s not unreasonable to ask whether the current situation is going to affect your visit. If you’ve worked hard throughout the year and spent a lot of money on your trip to Thailand, you still want to be able to enjoy it. There have been mixed messages on social media and misleading information from some international news outlets, but life goes on in Thailand. People are going about their usual daily routines. Transport is running normally. Bars, pubs and restaurants are open. Some bars voluntarily closed for a few days immediately after the King’s death, but have since reopened. Alcohol is being served as usual. Theme parks and zoos are open. Markets are open. Cinemas are open.

At some entertainment venues there have been restrictions on the volume of music allowed, but it varies from place to place. A number of music concerts between now and the end of the year have been cancelled. Some may be rearranged for later dates and it’s also possible the situation may change again in the coming weeks. It was interesting to note that Thailand’s Minister of Tourism briefed overseas ambassadors today (October 25). Part of the briefing said live music was allowed in bars, restaurants and clubs. That official announcement today may result in some changes being made to the information further below. 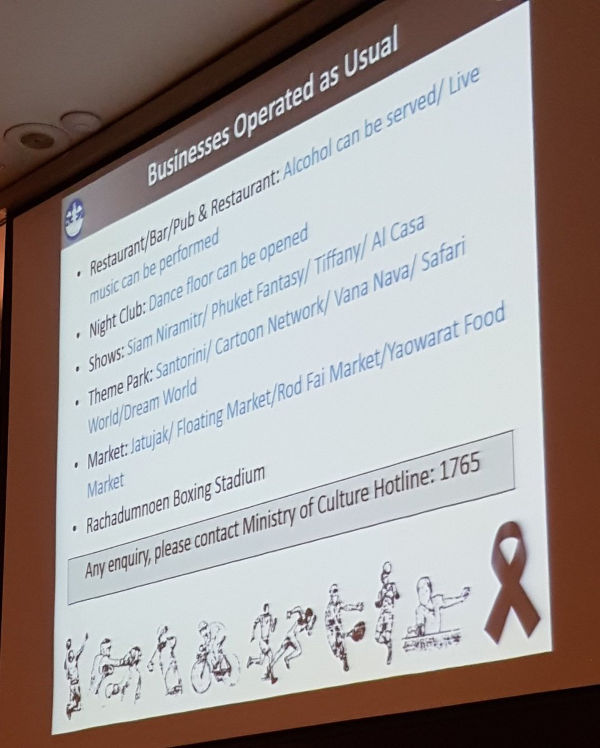 Tone it down
The Thai government and local authorities have issued guidelines to bars and entertainment venues, but the guidelines are open to interpretation. The basic request to entertainment venues was to ‘tone it down’ until the end of the initial 30-day mourning period in mid-November. Business owners and local authorities in Thailand are pragmatic. They are aware that there is a balance between showing respect and being able to earn a living. Many of the staff employed in entertainment venues in Thailand are self-employed. They don’t have the benefit of a regular salary. And they don’t have social security or welfare to fall back on.

I’m currently in Chiang Mai, but wanted to get feedback from people in other areas of Thailand. The information below is based on personal accounts from long-term expat residents who I know and trust. I am still waiting for feedback from a few locations and will add it when it becomes available.

With the King’s body resting at the Grand Palace in Bangkok, there is always going to be more of a focus on the Thai capital compared to the Thai islands or popular tourist resorts.

The adult entertainment zones in Bangkok have not been told to close, but have been asked to tone down activities. Bars and clubs in areas including Nana Plaza and Soi Cowboy remain open although there is a more subdued atmosphere outside with some of the neon lights temporarily switched off. Some bars are closing at midnight, but opening earlier to counter that.

Dinner cruises on the Chao Phraya River continue to run, but with no music. Bars in the backpacker area of Khao San Road are open, but the atmosphere is reported to be quieter. The Banglamphu area has a reputation for being a hangout for backpackers and budget travellers. But in recent days, hotels and guest houses in Banglamphu have been offering discounted room rates for Thai mourners travelling into the capital from the provinces. With Khao San Road and Banglamphu being so close to the Grand Palace and with Thai mourners in the area, discretion is required if you are staying here. You can still enjoy your time, but please respect local sensitivities.

The Night Bazaar remains open and the popular Saturday and Sunday Walking Street Markets continue to trade as usual. Bars and restaurants are all open. Most open-sided bars along Loi Kroh Road and around the Night Bazaar are not playing music and those that are have been doing so quietly. Many Thai staff are wearing dark tops or black ribbons and those I’ve spoken to say they will probably do so until mid-November. Official closing time for bars is 1am. However, if bars have customers still drinking and spending money, bar owners may take the decision to pull down the shutters and carry on serving discretely.

Live music is not currently being played at venues where it usually is. The North Gate Jazz Co-Op is open for drinks, but has announced it won’t be playing live music for the 30 days following the King’s passing. Boys Blues Bar in the Night Bazaar was temporarily closed but is open now. I presume they are not playing music, but I haven’t yet been able to confirm that.

Restaurants open as normal. Tourist-style bars near the Hilton Hotel (Soi Bintabaht, Soi Ponsook etc.) are all open. Music being played at many bars, but not too loud. Most bars in this area are closing at midnight.

Nightlife in Pattaya appears to have adapted very quickly. I’m told that there were a few days where music wasn’t played in Walking Street, but it was being played at lower volumes in other areas of the resort city. Since October 17, business has been getting back to normal and music is being played at more bars (although not as loud as usual). Officially, different restrictions apply to venues depending on where they are located. This means that venues on main roads or those with open fronts may be treated differently to other areas of Pattaya and clubs which are behind closed doors. Bar and club owners have been told not to have ‘sexy dancing’ on show. Behind closed doors is OK according to local authorities. Cabaret shows including Alcazar and Tiffany which are popular with tourists are still open.

Until the middle of November, the official closing time for bars in Pattaya is either 1am or 2m depending on where the venue is located. In reality, some bars are still serving beyond these hours if the shutters are down and customers are quiet and not being a nuisance.

Since October 18, the popular nightlife zone in Patong has been alive and kicking. Bars and entertainment venues are open and packed with tourists, but there is no loud music blasting and no live bands at the venues that usually have them.

Some bars in other areas of Phuket took the decision to close for the first three or four days after the death of the King. These venues have since reopened and customers are back there drinking as usual. Many staff are wearing black. At some venues there is no music, but there is at others. Bars in Phuket Town are open, but with no music. Some entertainment activities such as salsa dancing lessons, cocktail workshops, etc. have been cancelled. Markets all appear to be open. Many local people are wearing black, but not everybody.

Bars appear to be open on most of the Thai islands although some may be closing earlier than usual either out of respect or lack of customers in the lull before the high season starts to kick in during November. The Full Moon Party on Ko Pha Ngan scheduled for last week was cancelled. Although there was no pumping music and no party, alcohol was still being served as usual at beach bars on Ko Pha Ngan. The Full Moon party for next month looks set to go ahead with the date of the party put back one day to November 15.

As a mark of respect, the Thailand Football Association have announced the early end of the domestic football season. There has been talk that the decision may change. Followers of Thai football will know already never to count anything out. That has also been shown with the forthcoming World Cup Qualifier between Thailand and Australia. The match is scheduled to be played at Bangkok’s Rajamangala Stadium on November 15. There were suggestions that the match could be postponed, played behind closed doors, played at a neutral venue or switched to Australia. But the decision has now been taken to play the match in Bangkok. However, spectators are asked to wear black, white or dark shirts and refrain from chanting and celebrating. Banners are prohibited. I respect the decision and the sentiment behind it, but I do wonder how this will play out. It wouldn’t be a surprise if more announcements are made in connection with the match*. Whatever happens it looks set to be a unique occasion with an emotional atmosphere inside the stadium.
*Update November 2:
As predicted, the Thai Football Association has had time to rethink and chanting and celebrating will be allowed as usual.

Muay Thai
Bangkok’s two most famous Thai boxing stadiums, Lumpinee and Rajadamnern, have both announced they will not host any Muay Thai fights until after November 13 or 14.

The situation at entertainment venues remains flexible and will vary from location to location. I will add more updates here when I get feedback. I’ve also got a lot of travel planned around Thailand for the next few weeks so will be reporting back with what I’ve found. If you’re in the country now, please let me know what your experience is. Drop me an email or you can leave me a message on my Facebook page or via Twitter. Thank you.
Update: November 17
The initial 30-day mourning period in Thailand ended on November 14 with bars and clubs allowed to return to normal operating hours. Sporting fixtures have recommenced and television schedules have resumed showing soap operas and light entertainment shows.

Please also read:
Thailand mourns death of the King
What will happen to events & festivals?
What to wear to show respect
End of the initial 30-day mourning period